Who gains the most from the Federal Reserve’s (almost certain) rate hike this week?

Banks are one lucky group: if interest rates keep rising next year—as I expect they will—they’ll reap a windfall on loan interest. (Last week, we looked at my three favorite banks to buy now.)

But there’s another group poised to gain as rates arc higher next year, and hardly anyone has mentioned them. I’m talking about insurance companies.

There’s a direct link between rising rates and insurers’ profits.

Insurance companies are constantly investing the premiums they collect in, among other things, government and corporate bonds, and yields on those bonds rise with the federal funds rate. Those higher yields fatten insurers’ net interest margins, or the difference between investment returns and claims paid out to policyholders, resulting in higher profits.

Here’s another reason I like insurance companies now: they’re cheap. Consider MetLife, Inc. (MET), with a $54-billion market cap. Right now, MET is trading at just 77% of book value, or the price its assets would fetch if it were broken up and sold today.

But before you run out and buy MET, consider this: the company has issued so many shares since mid-2008 that it’s nearly doubled its share count. That has diluted earnings per share (EPS), because profits are divided among more shares, and acted like a lead weight on the stock price. Since July 30, 2008, MET is down 6.6%, compared to a 62% gain for the S&P 500.

My view: there are better deals in the insurance space than MET—companies that boast rising earnings, dividend hikes and share buybacks, to boot. Unlike share issues, buybacks cut the number of shares outstanding, goosing EPS and stock prices. Here are my two favorites now.

Torchmark Corp. (TMK) is a mid-cap insurer with a secret admirer: Warren Buffett.

The Texas-based company offers life and supplemental health insurance to middle-income Americans, both directly and through brokers.

The reason? A monster buyback program. In the last year, Torchmark has repurchased nearly 4% of its outstanding shares. But go back five years, and that figure jumps to 30.8%. Here’s how the share price has responded: 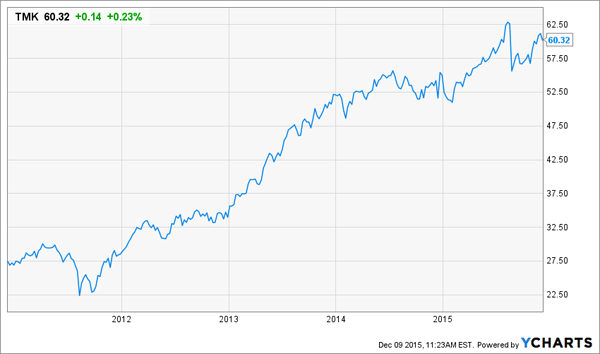 Rising rates will only fan that flame.

“We are encouraged by the potential for higher interest rates,” said co-CEO Gary Coleman on the company’s third-quarter earnings call. “Rising new money rates will have a positive impact on operating income by driving up excess investment income.”

To put that in context, “excess investment income” (or net investment income minus interest on policy liabilities and debt) came in at $0.43 a share in the latest quarter, or 40% of Torchmark’s net operating income. It edged up from $0.42 a year earlier, but a stronger rise would generate even more cash for buybacks in 2016.

And don’t let Torchmark’s measly 0.91% dividend yield fool you; it stems from the stunning rise in the company’s share price, not a stagnant payout. Torchmark has nearly tripled its quarterly dividend in the past decade, from $0.049 in early 2006 to $0.135 today.

The stock trades at 1.7 times book value, a substantial premium to competitors like MetLife, at 0.77, and Manulife Financial (owner of John Hancock Financial), at 1.1. But that’s still reasonable in light of the extra profits Torchmark will see as rates head higher.

Travelers Companies (TRV) has been snapping up shares and boosting its dividend at lightning speed over the past decade. With the added tonic of rising interest rates, I expect the company will put even more cash in investors’ pockets next year.

First, an overview. Travelers, founded way back in 1864, operates through three divisions: Business and International Insurance (58% of premiums written in Q3), Personal Insurance (car and home), 33%; and Bond and Specialty Insurance, 9%.

There are few companies that can boast a buyback program with the sheer scale of Travelers’. In the last decade, it has slashed its share count from 693.4 million to 304.2 million—a staggering 56.1% chop.

Those buybacks have helped grow EPS at an average annual clip of 12.8%, and the stock has clocked average yearly growth of 14.5%. There’s still plenty of gas left in this program, too: even though Travelers bought back $2.7 billion worth of shares through the first three quarters, it ended Q3 with $4.3 billion remaining on its authorization.

On the dividend front, Travelers’ current yield sits at around 2.1%, higher than Torchmark, but like Torchmark, the company has nearly tripled its quarterly payout in the past 10 years, boosting it from $0.21 to $0.61 today. And with dividends accounting for just 20% of Travelers’ earnings, there’s plenty of room for further hikes here, as well. 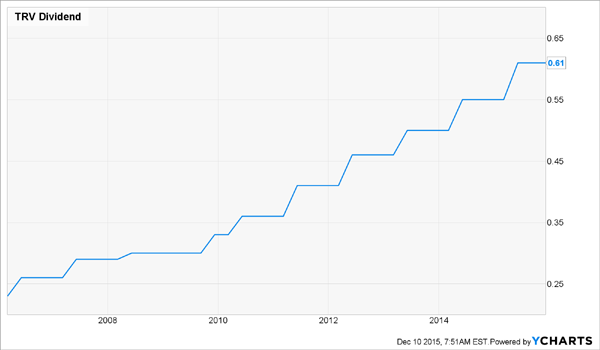 The kicker? Despite all these pluses, the stock trades at a comparatively cheap price-to-book ratio of 1.4.

My advice: buy Travelers now and insure your gains for years to come.

However I realize that you may need income and gains TODAY rather than tomorrow or next year. If that’s the case, I’ve got one high-yielding dividend stock in mind for you.

It pays a gaudy 7.3% annual dividend and business is absolutely booming. Expect healthy dividend increases for years to come – which means you’ll be earning a 10% yield on your initial stake in just a few years if you buy today. Click here and I’ll share the details on this company with you, along with the unique system that I used to uncover it.