Worried that rising rates are going to hurt some of the bonds you own? If so, you’d better move some of your fixed-rate bond money into “floating-rate” issues.

As I write to you on this first Wednesday of December, traders are handicapping a 78% probability that the Fed will boost rates in two weeks. Overall they’re projecting a half-percent increase between now and June. And renowned government insider Goldman Sachs is a bit more aggressive – it’s projecting a full percentage point of tightening.

The Fed last began a new rate-raising cycle at the end of June 2004 (yes, it’s been over 11 years). Over the ensuing three months, the 10-Year Treasury Note plummeted 10.8%. Not good for an issue yielding 4%+ at the time… it paid investors 1% in interest while losing 10-times as much in price. 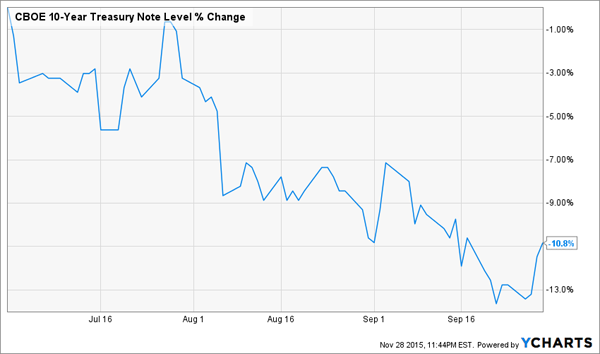 If you buy a 10-Year today, you’re getting just 2.2%. Your interest payments are secure, but your principal is at-risk if rates rise. Is that because, as everyone knows, bond prices always move counter to interest rates?

Not exactly. Sure, nobody will want your 2.2% bond if they can buy a newer, better issue yielding 2.5 or 3%. But your problem isn’t the fact that you own a bond – your problem is its fixed rate no longer looks as good as it used to.

Floating-rate bonds don’t have this problem. They have variable coupons that are calculated quarterly, or even monthly. Their rates take some reference rate (such as the federal funds rate) and add a spread to it. As the reference rate ticks higher, so does the coupon’s payout.

There are now two reputable ETF options for Treasury investors who want the adjustable rates: The iShares Treasury Floating Rate Bond ETF (TFLO) and the WisdomTree Bloomberg Floating Rate Treasury ETF (USFR). Both should perform better than fixed-rate Treasuries when the Fed moves.

But that’ll be a function of not losing money rather than producing meaningful yield. Since their inception in February 2014, TFLO and USFR have produced a total return of 0% and -1.1% respectively.

It’d Be Cheaper to Stuff Your Cash Under Your Mattress 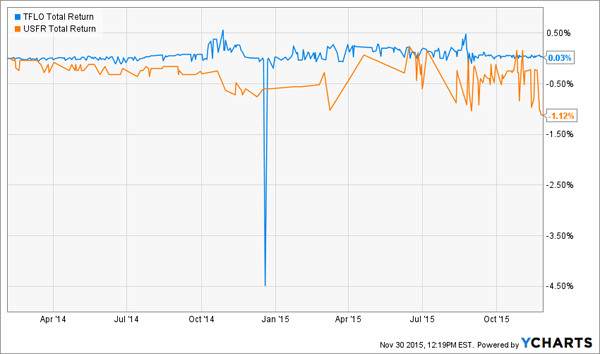 TFLO nets a yield of just 0.20% after expenses. And USFR barely covers its overhead, with 0.04% to spare.

Instead of investing in these barely-cash equivalents, I prefer corporate debt. The Fed’s hiking for the first time since 2006 because the economy is getting stronger, slowly but surely. That’s good for corporations’ balance sheets, and their ability to repay their loans.

You need to pick the right companies, of course, to make sure you get paid back. If you do, you’re buffering yourself from Janet Yellen, thanks to a “real yield” that’s protected when your coupons reboot.

The Market Vectors Investment Grade Floating Rate ETF (FLTR) buys floating rate notes from businesses that are rated as investment grade by Moody’s, S&P, or Fitch. It currently pays 0.89% and actually has a lower expense ratio (0.14%) currently than our two previous options.

FLTR: Slightly Better Than Your Mattress 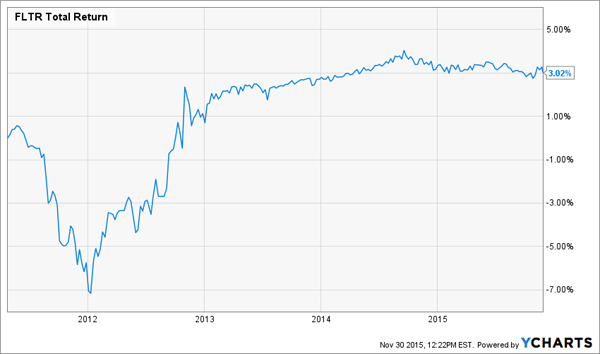 FLTR has delivered a total return to investors of 3% since inception three-and-a-half year ago. It’s designed for a rising rate environment, so its performance – in relative and absolute terms – should improve in the year ahead.

But the best deals in the corporate bond market are actually just below the somewhat-arbitrary investment grade cutoff. It’s where contrarian fund managers capitalize on the fact that any pension funds, banks, and insurance companies are not allowed to invest in these “low quality” issues per their by-laws.

The result is a sweet spot of value, thanks to the lack of big money chasing this type of paper.

There are plenty of good loans from companies that haven’t been christened by the rating agencies. But sub-investment grade is not exactly ideal ETF territory. You don’t want a generic basket of these issues. You want a carefully curated collection of loans from cash flowing companies that will have no problem paying you back.

My favorite floating-rate fund pays an impressive 5.8% today – more than 6-times FLTR. It has a decade-long track record, and it’s actually outperformed the outperformed the Barclays U.S. Aggregate Bond Index (a proxy for the fixed-income market) over the last 1-year, 5-year and 10-year periods. That’s impressive because we haven’t seen a rising rate cycle in a decade

With Fed tightening once again upon us, you should move your money out of fixed-rate bonds and into floating-rate issues.

I’ll be sharing my analysis of this fund, and its ticker, with my Contrarian Income Report subscribers this Friday. You’ll not only get my favorite floating-rate fund (paying 5.8%) but you’ll also get 6 more investable income ideas, all paying 6.2% or better. You can subscribe on a risk-free trial basis right here.