If you’re looking to make double-digit gains on your portfolio in 2016, don’t take your cues from the usual forecasters. They won’t actually tell you where to put your money anyway (as they supposedly save this inside information for their top clients).

But there’s always a bull market in some issues, and numerous studies have shown where to profit from them. Buy companies that pay—and preferably raise—their dividends. Even better if they also buy back their own shares.

Remember, buybacks cut the share count, boosting earnings per share—and share prices—while you get paid to hold the stock.

It’s a great formula when executed properly, and I’ve got two stocks for 2016 that I’m excited about. We’ll discuss them shortly. But some companies stretch their finances for dividends and buybacks and get themselves into trouble. You should avoid these stocks or short them outright. Here’s one problem child…

Borrowing money to pay shareholders is generally bad. Telecom giant AT&T Inc. (T) has actually paid out more in dividends per share than it earned per share in three of the last four quarters.

In calendar 2014, for example, it earned $1.46 per share, but it paid out $1.85. Yet management continues to raise its payout by a penny per quarter every year so the company can claim another year of dividend hikes. How are they doing it? By adding more long-term debt, which they’ve increased by 69% over the last 12 months.

The company will need more cash to keep its dividend streak alive. Unfortunately, its free cash flow peaked at $19.7 billion in 2012—for the twelve months ending September 30, 2015, it generated only $14.1 billion, a 28% drop.

When companies cut their dividends, their share prices often drop by 20% or more. AT&T is experiencing fierce competition on all fronts of its business. Its dividend—and stock—are potential time bombs.

Here are two stocks I like a lot better for 2016. Both offer rising dividends and big buybacks. To top it off, they have unique catalysts I expect to propel them to total returns of 20% or more before 2016 is out.

A Buyback Boost With an Interest Rate Tailwind

JPMorgan Chase & Co. (JPM), the world’s third-biggest bank by market cap, ticks off every box on my list.

Let’s start with the dividend: the shares yield a slightly above-average 2.6%, but JPM has hiked its payout by 76% over the last four years, or an average of 19% annually.

Put another way, if you bought the stock on, say, November 28, 2011, when it closed at $29.16, you’d be yielding a cool 6.0% on your initial investment today. What’s more, the bank pays out just 32% of its earnings as dividends, well below the 50% I like to see in dividend-payers, signaling more big hikes ahead.

Now consider the buyback story: last March, the bank got the Federal Reserve’s nod for a $6.4-billion repurchase program to be carried out between April 1, 2015, and June 30, 2016. That follows JPM’s $6.5-billion repurchase authorization in 2013.

You can see the effect these buybacks have had on JPM’s outstanding shares below: 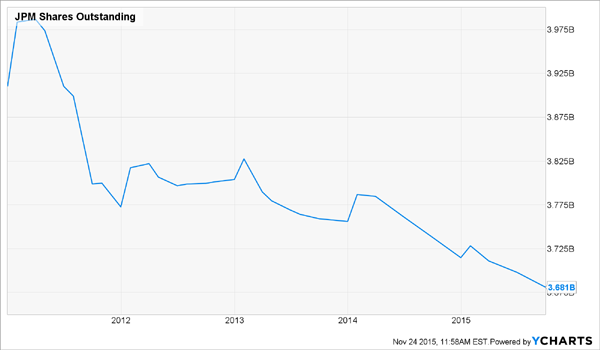 Meantime, JPM stands to gain from a liftoff in interest rates, which looks likely to start in December (with Goldman Sachs’ economists calling for four more hikes in 2016). Rate hikes benefit banks because they widen the spread between the interest they pay out on deposits and what they earn on their loans.

A couple weeks ago, I pounded the table on the Boeing Co. (BA), and it’s worth doing so again.

It’s hard to imagine an aerospace giant and a big bank like JPM having a lot in common, but take a look under the hood and you’ll see the same proposition: gain potential, rising dividends, big buybacks—and the financial strength to pull it all off.

On the dividend front, both offer similar yields (2.5% for Boeing vs. 2.6% for JP Morgan), but that masks a strong dividend-growth story, because both companies’ share prices have ignited along with their payouts.

Let’s say you bought Boeing on the same date I mentioned in the JPM example—November 28, 2011, when the stock closed at $64.99. Today, thanks to the aerospace giant’s 116% payout boost since then, you’d be collecting 5.6% in cash on your initial investment. And like JPM, Boeing has plenty of room for more hikes, thanks to its low 43% payout ratio.

The company’s earnings are also on a steady vertical climb, thanks to surging demand for airliners (68% of Boeing’s business in Q3). That will put some further lift under its payout, as well.

On the buyback front, Boeing has taken more than 10% of its outstanding shares off the market since 2013. Year to date, it has spent $6 billion on buybacks—and it has another $6 billion remaining on its authorization.

Another similarity: despite a big run in the past five years (up 133%), Boeing is still cheap, making now a great time to amp up its buyback program: the stock boasts a forward P/E of 15.6, putting it well below the S&P 500 and other defense stocks, such as Lockheed Martin (LMT) at 18.4, Raytheon (RTN) at 17.9 and Northrop Grumman (NOC), also at 18.

As much as I like Boeing and JPM in the year ahead, I’m even more excited about a newly publicly traded company that pays triple what these two pay—literally a sky-high 7.3% yield. It’s a direct play on America’s aging population, and its impressive dividend is not only safe but also certain to grow in the years ahead thanks to this undeniable demographic trend.

But you’ll want to make your move now: Goldman Sachs just initiated coverage on this recent spinoff, so it’s only a matter of time before other investors catch on and bid up the share price.

Don’t miss your chance to snap up this dream investment at a bargain. Go straight here to get full details now—before it’s too late!