If you want to double—or even triple—your dividend income overnight, there’s an easy way to do it: seek out companies that regularly pay special dividends.

Management usually announces these one-time payouts (which are always larger than regular quarterly dividends) after reporting a blowout quarter, or if they suddenly find themselves sitting on a ballooning cash pile. And with S&P 500 firms holding onto a combined $2.1-trillion stash, special dividends are becoming a lot more common these days.

They can instantly turn a company with a ho-hum dividend yield into an income investor’s dream.

Microsoft (MSFT) famously paid out a $3.00 special dividend in November 2004 that amounted to $32 billion from its long-term money pile. It signaled the company’s shift from a growth stock to a dividend and income investment.

More recently, Costco Wholesale Corp. (COST) shoveled a $5 special dividend out the door in February 2015. That was in addition to its regular quarterly payout of $0.355 a share (which it has since boosted to $0.40).

Costco broke the news on January 30, about six weeks after rolling out quarterly results showing a balance sheet bulging with cash, to the tune of $7.64 billion, up $1.2 billion from a year earlier.

If you ignore the special dividend, the warehouse retailer currently yields 1.01%, which is hardly on anyone’s “hot dividend” radar. But throw in the $5 payout, and suddenly you have a stock yielding 4.1%, double the S&P 500 average.

This isn’t Costco’s first special dividend, either. Back in December 2012, it rewarded shareholders with an even bigger $7-a-share payout.

And retailer Nordstrom (JWN) declared a special dividend of $4.85 per share in October (for an annualized 6.8% yield) after the company sold its credit card portfolio to TD Bank (TD). Need to return cash to shareholders without getting them hooked on the juice? One special is a good way to go.

Here’s something else few investors know about special dividends: they’re almost entirely hidden from the public.

That’s because stock-quoting services like Google Finance and Yahoo! Finance see them as one-offs, and therefore don’t include them in their dividend-yield calculations.

Right now, for example, both sites show Costco’s current yield as 1.01%, not the 4.1% “actual” rate. That’s even true of companies that send out special dividends on a regular basis.

So how do you find them?

Most of these stocks have three things in common: 1) healthy balance sheets, with low (or no) debt and, yes, high cash balances; 2) strong free cash flow; and 3) high insider ownership—because special dividends offer an indirect way to reward top execs.

So can we expect another “January surprise” from Costco next month? A quick glance at its latest quarterly results suggests the answer is no. The company ended the latest quarter with cash and short-term investments of $6.2 billion, down $600 million since the last special dividend.

Costco’s profits have also been squeezed by the strong greenback (28% of its sales came from outside the US in 2014) and a recently ended credit card agreement with American Express Co. (AXP).

But there’s another far more consistent special-dividend payer I’m adding to my watch list now, and you should, too: heavy-duty truck maker PACCAR Inc. (PCAR).

The company makes big rigs under the Peterbilt, Kenworth and DAF (in Europe) banners. It controls 28% of the US/Canadian market, along with a 15% share in Europe.

PACCAR boasts a “regular” dividend yield of 2.1%, the same as the S&P 500. But if you’ve been paying attention to PACCAR, you know that doesn’t represent its real payout. That’s because on December 8, the company said it would pay a special dividend of $1.40 a share on January 8, 2016. When you add that to its regular payout of $0.24 per quarter, you get a much higher 5.2% yield.

The reasons look a lot like Costco’s: third-quarter earnings that easily topped the Street’s expectations and a balance sheet boasting $3.53 billion in cash, up 19% from a year ago.

When it comes to special dividends, PACCAR pulls ahead of just about any other stock you’ll find: 2016 marks the sixth straight year it has lined investors’ pockets with an extra payout. And it’s increased the rate each time, with this latest payment 40% bigger than the $1.00 a share it paid in early 2015.

Here’s how that looks over the past five years, when you include increases to PACCAR’s regular dividend, which has doubled in that time: 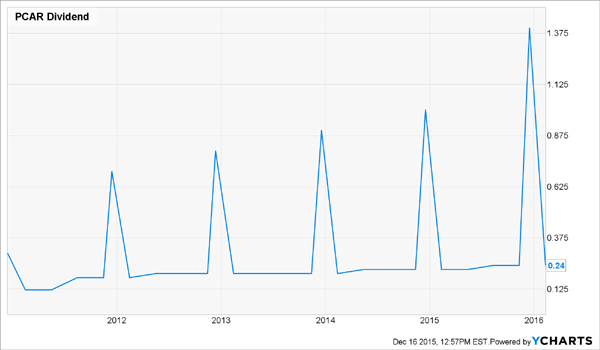 To be sure, trucking is a cyclical business, and some forecasts are calling for a slowdown in big-rig sales in North America, the company’s biggest market, in 2016, after a big run-up following the recession. That’s a major reason why the stock is down more than 30% so far this year.

However, PACCAR stands to gain as the European recovery takes hold, driving truck demand higher. As well, the company’s parts business, which chipped in 23% of its third-quarter pre-tax profits, helps cushion PACCAR when truck sales drive off a cliff, as fleet operators buy more parts to keep their older rigs rolling longer.

It’s tough to tell if PACCAR will continue its special dividend streak, but you won’t have to worry about that if you invest in another stock I’ve discovered. It delivers you a 7.3% yield straight out of the gate, and it doesn’t rely on unpredictable special dividends to get you there.

And unlike PACCAR, which is at the mercy of the economy’s boom/bust cycles, my top pick’s profits are smooth as glass. That’s because it’s cashing in on one of the most reliable trends going: the aging of 75 million baby boomers.

This is also THE best time to buy it, thanks to the hysterical “interest rate panic.” As this subsides, its stock price will be bid up—which means its fat yield will be bid down. Click here and I’ll share the name and ticker, along with the unique system I used to uncover it.