These 2 Dividends (Yielding Up to 9.3%) Are Your Best Overseas Buys Today

If you’re not holding at least some of your portfolio in international dividend stocks, you’re missing out.

Stocks (and funds) in some overseas markets pay higher dividends than US companies. The 60 biggest stocks on Canada’s Toronto Stock Exchange yield 2.5% right now, for example, compared to a 1.3% average yield for the S&P 500.

What’s more, plenty of US investors are (in many cases unintentionally) biased toward their home country, with more than three-quarters of their portfolios, on average, invested in the US, according to recent numbers from Franklin Templeton.

To a degree, that’s understandable—after all, America has the world’s biggest and most dynamic stock markets, boasting dominant big cap firms such as Pfizer (PFE), Ford Motor Co. (F) and Walt Disney Co. (DIS), the likes of which simply don’t exist anywhere else.

Still, it pays to make investing abroad a priority, both for income reasons and for the reduced volatility that a geographically diverse portfolio brings. But of course, not all overseas markets have appeal right now.

Which brings me to the specific country I want to talk to you about today: China.

Chinese stocks aren’t known for their dividend yields—the benchmark iShares MSCI China ETF (MCHI) yields just 1.1% right now, less than the S&P 500. But you still might be tempted, because Chinese stocks have moved in the opposite direction as their American cousins this year, suggesting there could be deals to be had.

Chinese Stocks Mirror the S&P 500 (in a Negative Way) 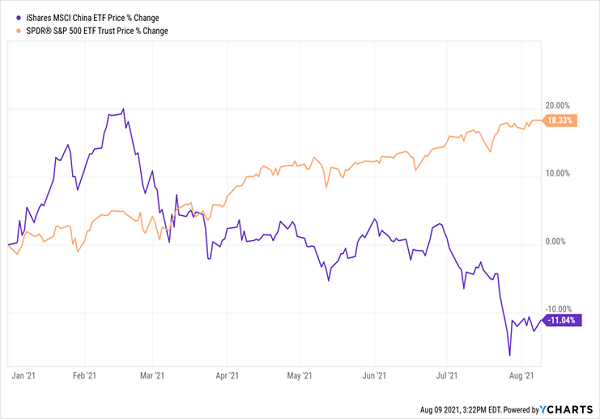 You might even be tempted to go around America’s high-flying tech names, like Apple (AAPL), Microsoft (MSFT) and Amazon.com (AMZN), by picking up big Chinese giants like Tencent (TCEHY), Baidu (BIDU) and Alibaba (BABA), which have all seen double-digit declines this year. 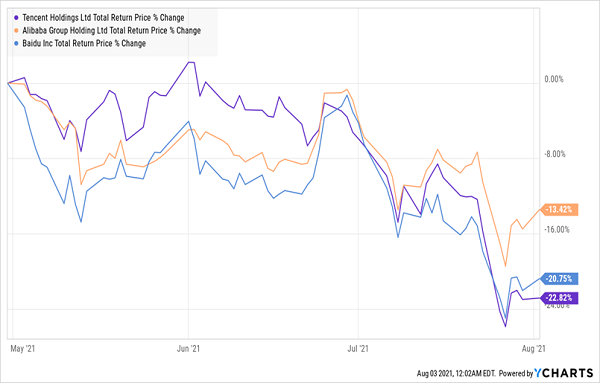 Truth is, these tech giants (and Chinese stocks more generally) are falling for good reason—starting with that ever-present boogeyman of investing in the country: ever-shifting (and sometimes absent!) regulations.

Case in point: the Chinese Communist Party has recently warned some companies that they are, in fact, no longer allowed to earn profits! Most recently, any company in the education sector, including online private test-prep schools, are forbidden to earn any profit at all.

And there’s another legal trap that could become a problem for investors in Chinese stocks.

This one stems from the fact that investors outside of China, ranging from multi-billion-dollar hedge funds to your average retail investor, don’t actually own shares in Chinese companies. Instead, they own parts of something called variable interest entities (VIEs)—companies that have contractual agreements to receive profits from Chinese firms. It’s not entirely clear how legal this approach is, and that could put your Chinese holdings in jeopardy if the country’s government decides to act against it.

It’s no small amount of money we’re talking about here, either—Chinese megacorps like Alibaba are major VIE users, according to Nikkei Asia. All told, there are about $1.6 trillion in Chinese investments tied to the VIE structure.

In light of all this, I recommend staying well clear of China ETFs right now, despite the dip in these assets. And it’s not just pure-play Chinese ETFs that are risky: there are other ETFs out there that are also weighted heavily to China, such as the Vanguard FTSE Emerging Markets ETF (VWO) and the iShares Core MSCI Emerging Markets ETF (IEMG).

VWO and IEMG are spread out around the world, but 40% of their portfolios are in Chinese tech companies, which is why both funds are underperforming the iShares MSCI Emerging Markets ex-China ETF (EMXC), in blue below, which, as the name says, excludes China.

China Drags Down VWO and IEMG 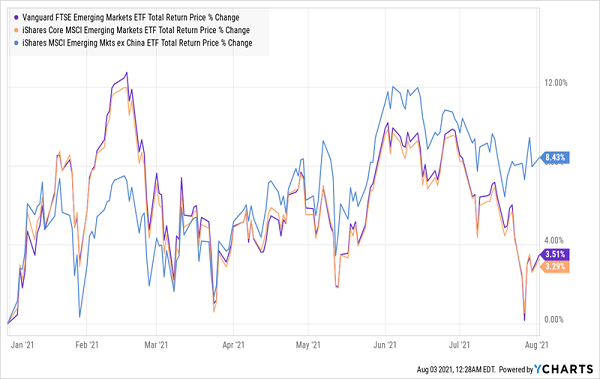 That suggests EMXC is a much better option if you want emerging-market exposure, but it’s far from the best option out there.

How to Invest Beyond the US for 7.4% Dividends (With Less China Risk)

If you want emerging markets in your portfolio, I’d recommend avoiding ETFs entirely, because a simple passive approach to these complex markets just doesn’t work.

These funds are managed by professionals who can anticipate changes in the market. This is why both of them have been outperforming both the China and ex-China ETFs over the last few months. 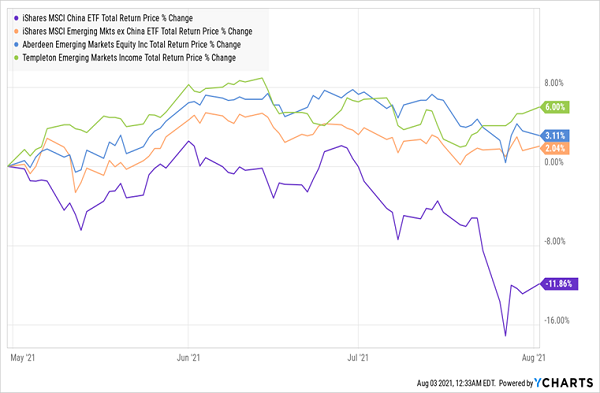 The fact that these two CEFs hand over huge income streams (multiples higher than the 1.4% average yield you get from the three ETFs we’ve discussed) is just icing on the cake.

I’m ready to share my top 4 CEF picks with you now (average yield: 7.6%, forecast 12-month price upside: 20%+) AND give you full access to all 14 funds in my CEF Insider service’s portfolio with no risk whatsoever.

CEF Insider, which, as the name says, focuses 100% on these often-overlooked high-yield funds, is widely diversified, with CEFs holding US stocks, international stocks, real estate investment trusts, corporate bonds and municipal bonds (whose dividends are tax-free for most Americans). Its portfolio yields a whopping 6.7%, on average, today, and the highest payer of the bunch throws off a rich dividend just shy of 8% that comes your way monthly.

Simply click right here and I’ll give you the full story on all of my top 4 CEF picks in a special investor report. When you do, you’ll also get an exclusive opportunity to “road test” CEF Insider and get full access to the service’s 14-fund portfolio with no obligation whatsoever.