I usually don’t recommend shorting a closed-end fund (CEF), but if I were to do so, the 3 I’m about to show you would top my list.

I don’t like shorting CEFs for two simple reasons: first, you’re responsible for paying out the dividends on a shorted stock. So if a CEF pays a 10% yield, you have to pay out 10% while shorting it. No thanks!

Second, the CEF market is extremely irrational. For this reason, CEFs can remain overvalued for a long time, meaning you’ll need to short for far too long before you get your payouts.

Still, there are some CEFs that are so absurdly overbought that shorting becomes really tempting. And 2017 has yielded some silly buying of some really bad funds, like these 3:

Fund #1: Overbought and Set to Fail

The first fund I want you to avoid is actually a good fund. The Calamos Global Total Return Fund (CGO) is an excellent fund run by really smart managers, which is why its net asset value (NAV, or the market value of the assets in its portfolio) has done this: 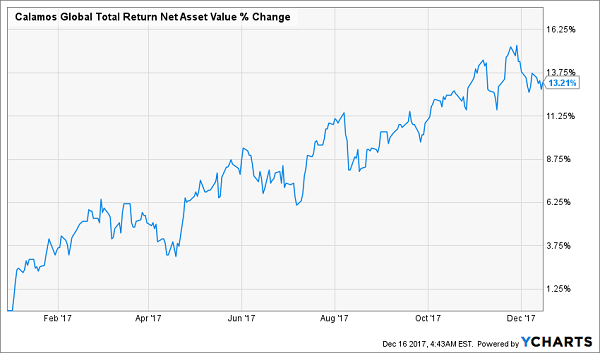 That 13.2% gain in just one year is impressive—even more so when you realize that this return is after the fund has paid out an 8.4% dividend yield from its NAV in 2017.

So what’s wrong with CGO? I can sum it up in three words: it’s too late. I liked this fund back in May, and now the market agrees. CGO’s portfolio is up 13.2%, but its market price is up a whopping 35.7% over the same time period: 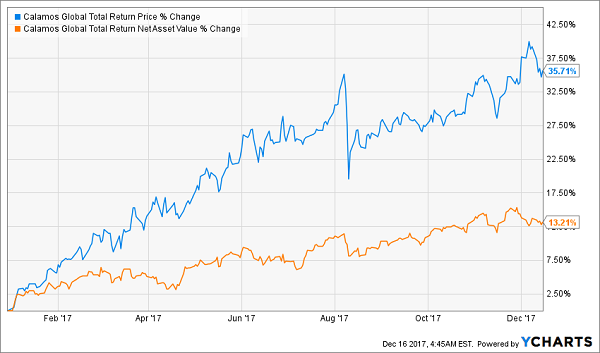 As a result, the fund’s discount to NAV has evaporated and turned into a premium: 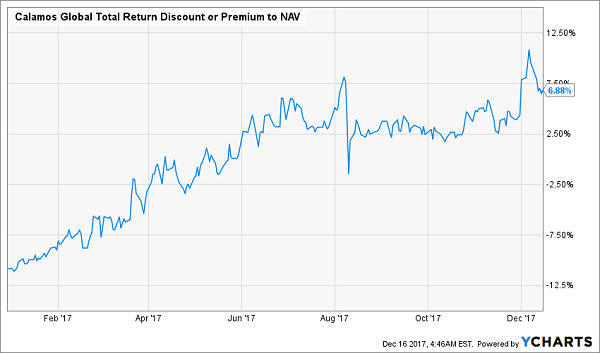 The bottom line? Buy CGO now and you’re paying a lot more than someone who bought at the start of 2017. It’s just too late for this one.

Fund #2: Losing to the Competition

Now let me show you a terrible fund that’s a bad buy just because it’s terrible.

The MFS Special Value Trust (MFV) is a disaster. It’s up a measly 1% in 2017—which sounds okay, but it’s worse than all but one of its peer funds.

But the market doesn’t care! Investors are jumping in at a breakneck pace, causing MFV’s market-price return to exceed its portfolio’s fundamental return by a factor of 15:

The Herd Gets Ahead of Itself 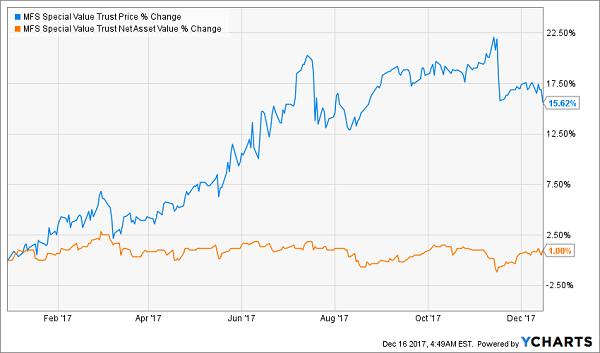 There are many funds out there that are better managed and deliver fatter returns than MFV. Every once in awhile the market realizes this, which is why MFV’s market price crashed in March, July and November. Expect those crashes to happen again in 2018—and expect them to be much worse.

Here’s another terrible fund whose returns are unacceptable in 2017: the Miller/Howard High Income Equity Fund (HIE).

HIE is a value-investing fund that uses Warren Buffett’s investment principles to find high-quality companies. Considering that the S&P 500 (SPY) is up 20% in 2017, HIE should be up by at least that much—especially since this fund charges a scandalous 2.13% in management fees.

So how is HIE doing in 2017? This chart will make you laugh or cry, depending on whether you own it: 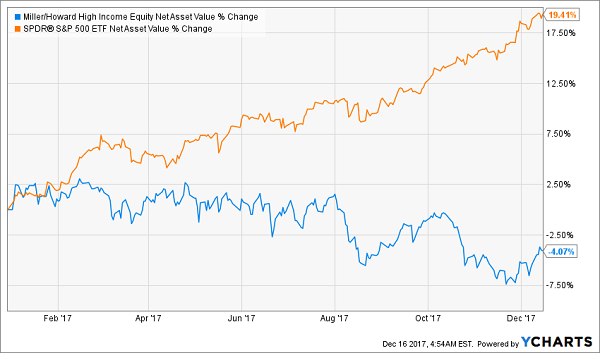 HIE’s NAV is down 4.1% in 2017 because the fund isn’t earning enough to sustain its 10.9% dividend yield. That means it’s going to cut its dividend (something it has never done). When that happens, the market is going to panic and sell fast.

Among the first sellers will be the folks who bought this year at an unjustifiable premium to NAV—a premium that’s crawled higher and higher because HIE’s price return is so much higher than its NAV return over the last year:

Reason to Run Away 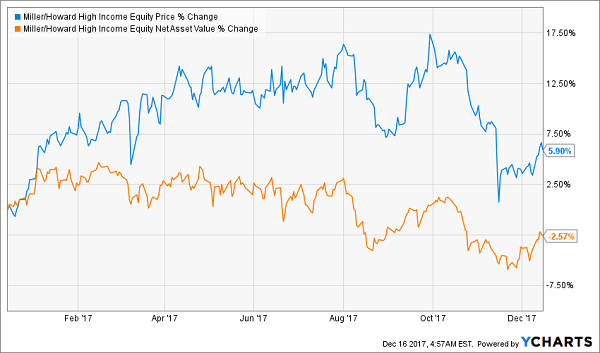 The market has already begun to pick up on the mistake it’s made here, hence the sharp decline in the fund’s market price in November. But that selloff has only just begun—especially when the fund cuts its dividend, which I expect will happen next year. Expect this to be a big dud in early 2018.

You read that right: my favorite CEF for 2018 boasts an incredible (and easily sustainable) 10.4% dividend payout!

And unlike the 3 ticking time bombs above, this one is ridiculously undervalued—I’m talking about a 5.3% discount to NAV here. That doesn’t sound like much until you realize that this fund usually trades at a 1.7% premium.

That simply means there’s at least a 7.0% gain “hardwired” into this fund when that “normal” premium returns. Add that to this fund’s blockbuster 10.4% dividend yield and we’re sitting on 17.4% total returns in 2018 here—with most of that in CASH.

And that’s just the start.

Because this fund’s management has an eye for bargains unlike any I’ve ever seen: the stock portfolio they’ve painstakingly assembled boasts an average P/E ratio of 17.5 now—way lower than the S&P 500’s nosebleed 25!

Add it all up, and we’re lined up for EASY 20% price gains “on the side” here. And I’ll say it again: we’ll still be collecting that blockbuster 10.4% income stream along the way!

I’ll show you the name, ticker and everything I have on this incredible fund when you CLICK HERE. I’ll also reveal the names of my 3 other favorite CEFs, too. Add these 4 powerhouse funds together and you get an “instant” portfolio spread across just about every asset class you can think of: US stocks, foreign stocks, bonds, real estate and more.

PLUS, these 4 income powerhouses combine to hand you a safe—and GROWING—8.1% average dividend yield and easy 20%+ upside in 2018.

But I must warn you: The outrageous discounts on all 4 of these “perfect” investments are starting to vanish, so you need to act now. CLICK HERE to get the names, tickers and everything you need to know about my 4 top CEF buys for 2018 NOW.