These Funds Will Triple Your Income in 2018

I’m going to get straight to brass tacks. Let’s discuss 2 closed-end funds with up to 18% upside in the next 12 months, plus yields up to 5.8%. Both are leading a blockbuster trend almost everyone has missed.

I say “almost” because if you’re a canny contrarian (and if you’re reading this I’m betting you are), you probably know what I’m going to say.

I’m talking about the quiet rebound in actively managed funds (that is, funds with real humans in charge), including CEFs.

So far this year, more than half of active managers are beating their benchmarks. And when human stock pickers take the lead, they keep it, like they did from 2001 to 2011.

This is where our opportunity lies, because the first-level crowd is running in the opposite direction! In the first seven months of 2017, $272 billion flowed into ETFs, almost matching the $287 billion in all of last year.

That means it’s time for us to snap up some disrespected high-yield CEFs. To help you do just that, I’ve taken the 2 powerhouses I mentioned off the top and put them toe-to-toe with their “dumb” ETF cousins.

The Boulder Growth and Income Fund (BIF) stands out for one figure: 15.1%, one of the widest discounts to net asset value (NAV) in the whole CEF space.

Translation: you’re paying just $0.85 for every dollar of assets here!

If this discount window snapped shut (and that’s being conservative; this fund has traded at premiums up to 20% in the past decade), the stock would soar 18%!

That kind of gain would turn ETF investors green with envy, because their favorite funds never sport such markdowns. 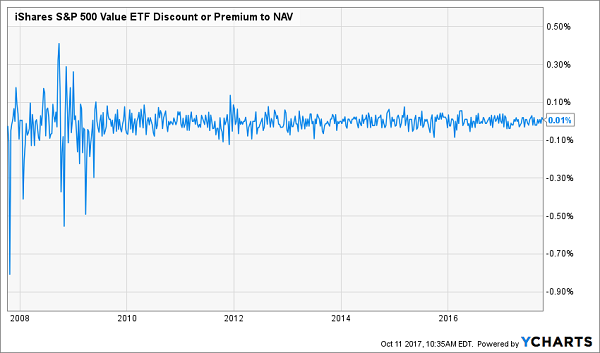 Both funds hold Warren Buffett’s Berkshire Hathaway (BRK.A, BRK.B), though BIF, in a bid to emulate the value sleuth himself, holds a much bigger stake, at 30% of the portfolio. JP Morgan Chase (JPM), Wells Fargo (WFC), Cisco Systems (CSCO) and Chevron (CVX) also show up in both funds.

By now you’re probably wondering what the difference is. 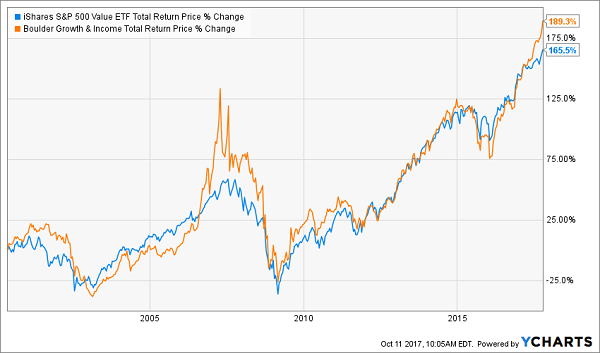 The dividend is lower than you get from most CEFs, at 3.8% but it crushes IVE’s 2.2%. That conservative yield also means the payout is safe and poised to grow.

And if you’re worried that rising interest rates will hurt CEFs (a common concern that, happily, has been disproven time and again), BIF gives you one more layer of security: it barely uses any leverage (just 3.98% of the portfolio), so you won’t have to worry about higher borrowing costs killing your returns.

The bottom line? If you want a fund to buy and hold forever, BIF—not its low-fee colleague—should be high on your list.

Round 2: Battle of the Yield Plays

For one-stop dividend-stock shopping, the Vanguard High Dividend Yield ETF (VYM) is a top choice for many folks.

The reasons are obvious: Vanguard is a trusted name in ETFs; the fund holds large cap stocks like Microsoft (MSFT), Johnson & Johnson (JNJ) and AT&T (T); it has a blink-and-you’ll-miss-it 0.8% expense ratio; and it offers a 3.0% yield—50% more than the S&P 500 average! 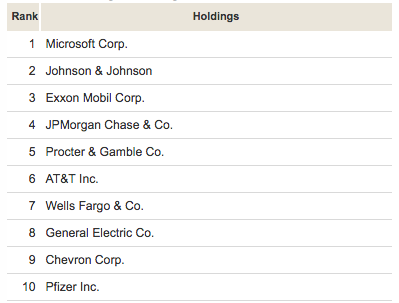 That’s good enough for most folks.

Trouble is, if you stop here and click the “buy” button, you’re missing out on a CEF that’s a far better buy: the Gabelli Dividend & Income Trust (GDV).

Look at the gain manager Mario Gabelli, another celebrated value hound, has steered GDV to in the last decade: 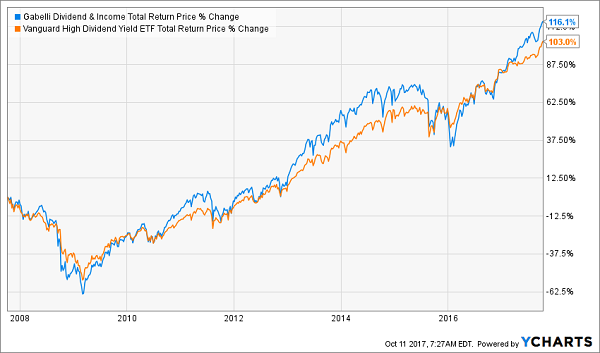 Even if the above results flipped, GDV would still win in my book, because its higher dividend—a 5.8% yield as I write—means a big chunk of its return was in cash.

And like our two value-stock funds, GDV and VYM look similar when you open the hood, including the size of their portfolios, with GDV holding 439 stocks and VYM with 406.

The portfolios’ sector allocations are also mirror reflections: GDV has 18.8% of its assets in financials vs. 13.4% for VYM, and there’s less focus on energy (as you’d expect from a dividend fund), at 8.9% for VYM and 5.4% for GDV. 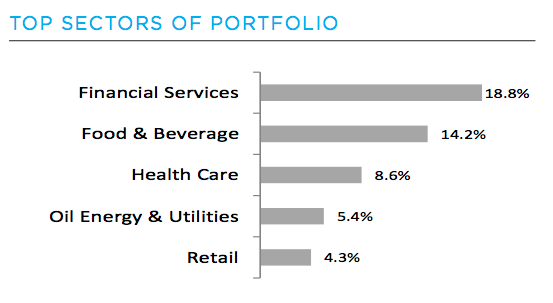 So why does GDV fly under the radar?

Same reason BIF does: fees, which come in at 1.4%, or almost 18 times (!) more than VYM. (If you haven’t read it yet, check out my colleague Michael Foster’s takedown of the common “wisdom” on fund fees here.)

You can probably guess where I’m going next. Like the three-man crew at BIF, Gabelli is more than earning his keep: the return I showed you above (and all the returns I show you) is net of fees. And keep in mind that those fees come out of GDV itself—the fund doesn’t send you a bill.

Finally, if you think this fund will stumble as rates head higher, think again.

Look at the last rising-rate period, from July 2004 through June 2006, when Fed Chair Alan Greenspan raised the federal funds rate from 1% to 5.25. An earthquake.

How did GDV do? 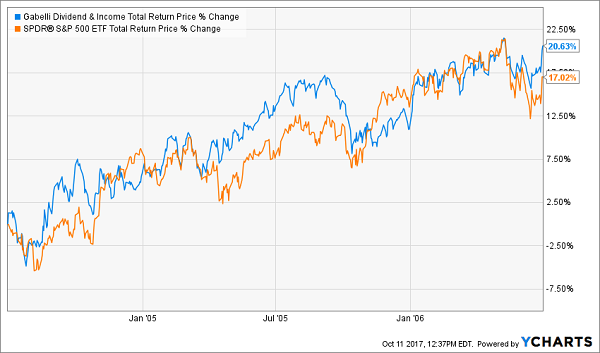 That record, plus the fund’s high yield and 6.4% discount to NAV, make it a far better play than its “dumb” cousin VYM now.

I know that a completely safe 8% yield may sound like a pipe dream. But just like ridiculous discounts that turn into premiums overnight (I’m looking at you, BIF), gaudy 8% to 11% yields are common in the CEF world!

In fact, two of the three CEFs in my 8% No-Withdrawal Retirement Portfolio pay even more—and the entire portfolio itself, which is made up of 6 investments in all (CEFs, REITs and preferred shares) hands you a safe—and growing—8% on average.

Plus the instant diversification you’re getting here makes this “no-drama” portfolio far safer than what the strategy too many folks rely on: pile into a high yielder and hope for the best.

Here’s what you get from the 3 powerhouse CEFs in this unique portfolio:

Now I’m ready to take you inside this one-of-a-kind portfolio and give you everything you need to know about these 3 cash-rich CEFs and the 3 other cash-spinning REITs and preferred-stock funds it holds.

All you have to do is CLICK HERE and I’ll share the specifics—and all of my research with you—right now.