5 Big Yields That Will Ruin Your Retirement

Today, I’m going to warn you about five stocks with yields of 7% or more that should be avoided at all costs. They are my next “dividend disaster” candidates that are likely to either reduce their payouts, or lose 20% or more in price, or both.

Big current yields have nothing to do with safety. Consider these year-to-date performances from high-yielding companies that started 2017 with juicy yields, but at some point cut or suspended their dividends:

I warned you to sell Mattel late last year, before its dividend cut. If you owned it at the time, I hope you followed my advice.

Looking ahead towards 2018, here are five big dividends that may be next on the chopping block. If you own any of these stocks, it’s not worth the risk. (Especially when there are perfectly safe 8% payers you can replace them with).

Well, back in August, Macy’s posted a 5.4% year-over-year decline in revenues and a 2.5% drop in comparable-store sales. And both figures were better than Wall Street’s even more pessimistic expectations.

Simply put: Amazon.com (AMZN) is causing several department-store anchors to hemorrhage sales, with these brick-and-mortar giants unable to provide any value add to compensate for Amazon’s deeper discounts and convenience. Macy’s, down 40%-plus year-to-date, has been among the hardest hit, with revenues in a multiyear decline and profits less than half of where they were just three years ago.

Will Macy’s spin off its property into a real estate investment trust (REIT) to unlock value? Will someone buy the aging retailer? These are the questions one asks when probing Macy’s value – not anything involving organic growth or a sustainable turnaround.

Is Macy’s dividend in immediate danger? No – the retailer still is within comfortable coverage. But the company seemingly has ceased adding to it, falling behind its regular schedule of hikes – a vote of no confidence, if you ask me.

Avoid this tempting yield. It won’t be enough to offset Macy’s continued plunge into oblivion. 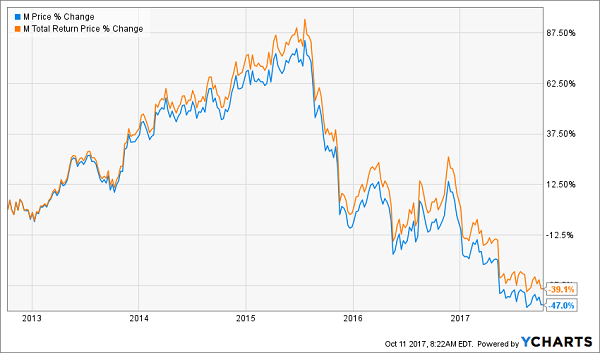 While Macy’s might be able to keep paying dividends for a few more years, I think Barnes & Noble’s (BKS) payout is one of several that are destined to go the way of the dodo sooner than later.

The math just doesn’t work. Barnes & Noble is projected to earn 50 cents this year, and even improve upon that with 56 cents in profits next year. But the battered bookseller is delivering 60 cents in dividends on an annual basis.

Amazon gashed Barnes & Noble’s business model long ago. Yes, BKS is still alive and kicking, but this is a slow bleed that will eventually claim another brick-and-mortar victim. And while a yield of more than 8% sounds nice, it doesn’t do much good if the stock keeps posting performances like its 35% decline through the first three quarters of the year. 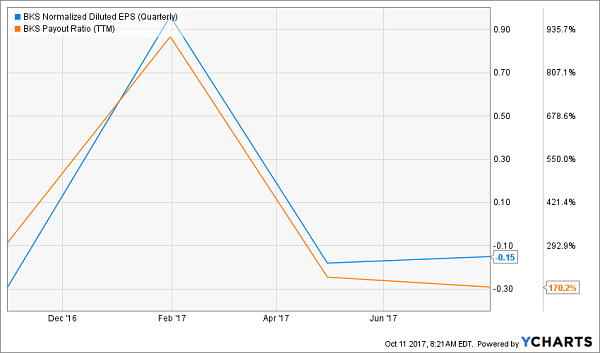 Global Medical REIT (GMRE) isn’t the best-known stock on this list, but it’s perhaps the most frustrating one.

GMRE is a high-yielding REIT that plays in the healthcare space, purchasing facilities, then leasing them out under lucrative long-term triple-net leases. In other words, you have the income potential of the real estate space mixed with the booming megatrend of increased spending on healthcare.

That might sound like shooting fish in a barrel, but Global Medical REIT has made this look difficult.

To its credit, GMRE has grown its top line by leaps and bounds, but net losses have expanded, too, from $1.61 million in 2015 to $6.35 million in 2016. That resulted in negative $3.98 million in funds from operations (FFO) – a vital operational measure that helps determine the viability of a REIT’s payout. The company also has been improving its adjusted FFO through two quarters of 2017, but AFFO of 2 cents and 14 cents per share in Q1 and Q2, respectively, aren’t enough to cover one quarter of GMRE’s 20-cent dividend, let alone two.

There are better, safer REITs if you’re looking for real estate dividends. Avoid Global Medical REIT until it can prove its operations can sustain the dividend.

Uniti Group (UNIT) – a REIT that was spun off from troubled telecom provider Windstream (WIN) – is buzzworthy right now, but for all the wrong reasons. Namely, share prices have hemorrhaged 40% this year, driving the yield on this real estate play to over 15%. It’s the talk of yield-hungry investors, but the talk should be about Uniti’s ability to survive.

The flashier headline is that a Windstream bondholder called shenanigans on the April 2015 spinoff of Uniti, and claims it translates into a default on notes due in 2023. But a strong 15-year lease agreement that favors Uniti and Windstream would mostly protect the former, even in the worst-case event of a bankruptcy by the latter, so this isn’t as big a deal as it seems.

The problem is Uniti’s financial situation. Roughly 70% of the company’s revenues still come from Windstream, and while Uniti has been working on diversifying, it simply doesn’t have the funds to do much more. Moreover, the company is short on cash to tackle a looming debt wall. Thus, while the company technically generates enough AFFO to cover its dividend, cutting it – and freeing up cash flow – might be in the best interests of the company.

Will it or won’t it? That remains to be determined. The point here is that Uniti Group clearly is on shaky ground, and even if a dividend cut is even remotely in play, that means UNIT simply can’t provide the security you need out of a retirement holding.

On very rare occasions, investors can actually consider buying into a company that has recently pulled the trigger on a dividend cut. Once in a while, these last-ditch grabs for cash end up preserving the business.

I don’t believe Frontier Communications (FTR) is one of those occasions.

Frontier’s stock has been decaying for nearly three years, in part because the company botched the follow-through of its $10.5 billion buyout of Verizon Communications’ (VZ) wireline business covering California, Florida and Texas, which closed in 2016. While the company packed on debt, it didn’t pack on results, shedding subscribers ever since. And Frontier this year has been forced to both cut its dividend by 62% and execute a 1-for-15 reverse split just to keep its shares out of delisting territory.

Frontier Communications (FTR) Is Up to Its Eyeballs in IOUs 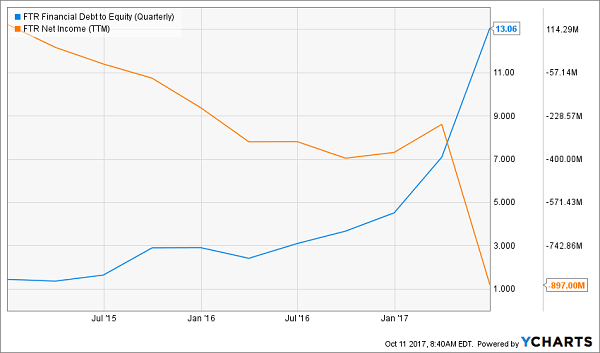 The reduced dividend certainly frees up cash, but it didn’t fix the company’s subscriber exodus, which totaled 162,000 customers in the recently reported Q2 – putting the company’s losses at more than half a million subscribers in the trailing 12 months.

Frontier might be perpetually cheaper, but at no point will it become a value. The business is radioactive, and so is the stock.

And I’m not suggesting you sell these “problem children” and replace them with commonly held blue chip names either. Sure, their dividends are safe. Problem is, everyone flocks to those safe payouts – and their yields aren’t enough to live off.

Even a million bucks in most dividend aristocrats will barely net you a 3% annual yield. That’s $30,000 in income annually. On a million dollars.

That’s about what your local Starbucks barista is banking!

However there are nine stocks and funds available today that pay reliable yields of 7% or higher. These issues even have some price upside to boot.

I’m talking about investment vehicles that have market caps between $1 billion and $3 billion. They’re plenty liquid enough for you and me, but not for the big institutional investors that hold two-thirds of all shares in public stocks. Combined they make up only a fraction of the stock market’s total capitalization – so they don’t get much coverage from the financial media.

And that makes these ignored corners of the financial markets ideal places for us to bank secure 7% yields, so that we can actually live off dividend income alone – and pass your friendly barista in earnings! In fact these nine ideal investments can have you thinking about retirement with a little as $500,000 in your portfolio. Click here and I’ll share the names, tickers and buy prices of my nine secure 7%+ favorites with you.