Many people are desperate for any decent yield these days, which is making oil and gas funds (with payouts that can stretch into the double digits) look attractive.

But the trouble with buying these funds now is that you’re putting yourself at risk of price drops far bigger than any yield you might collect. That’s a worst-case scenario for anyone in retirement or hoping to clock out in the next few years.

Another thing to consider is that the argument for investing in energy funds is based on the recent improvement in oil prices, which appears to be accelerating. 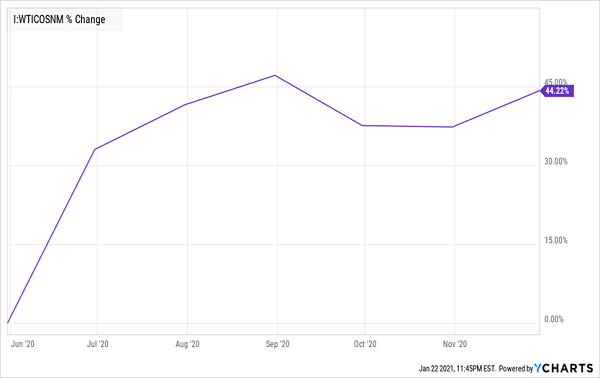 I’ve seen a few pundits point to a “boom” in oil prices, selectively choosing time periods like the one above, to argue in favor of jumping into energy stocks and funds.

But this chart is misleading because it starts shortly after oil prices went negative last spring. Zoom out a bit and you see that oil is on a long-term decline.

… But Longer-Term Ones Don’t! 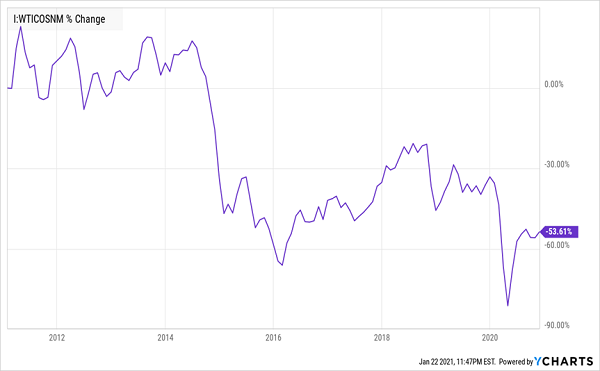 It’s true that we’ll likely see an economic recovery in 2021, but that doesn’t mean energy prices will boom. Here are two things to keep in mind as 2021 plays out.

A big headline for the energy markets is President Joe Biden’s announcement that he will cancel the Keystone XL pipeline, which has caused a mix of reactions in the industry. Alan Armstrong, CEO of Williams Companies (WMB), said the cancellation means constructing a big new pipeline in America has “become an impossible task,” adding that trying to do so would be a waste of money.

The most ardent energy bulls, however, say the cancellation will cut oil and gas inventories, boosting those commodities’ prices. But the market disagrees. 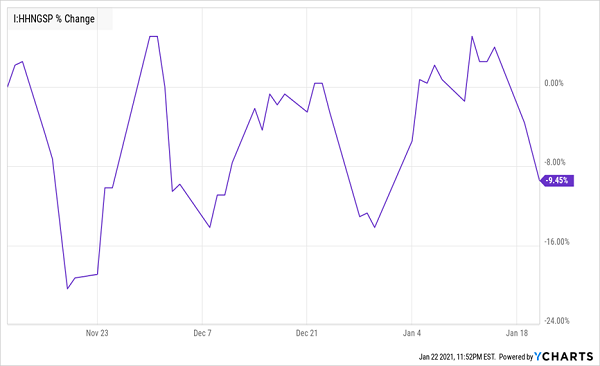 Since President Biden won the election, natural-gas prices have struggled, reflecting the fact that investors knew beforehand that canceling Keystone was a big part of Biden’s policy, and that the president is not particularly friendly to fossil fuels in general.

Rather than seeing this as a cause for lower inventory that will drive prices higher, the market (quite correctly) has seen Biden’s election as largely unimportant to oil and gas price, because of a more important trend that transcends who is in the White House.

Renewables Are Cheap and Getting Cheaper

In 2015, I wrote that an aggressive pursuit of alternative energy, both in the west and in emerging markets, would cause fossil fuel demand to fall. Thus, owning a master limited partnership (MLP) in the oil and gas storage or transport business, or an MLP-focused ETF like the Alerian MLP ETF (AMLP) was a mistake. Here’s how AMLP fared vs. the S&P 500 since.

Energy MLPs Have Been a Losing Bet 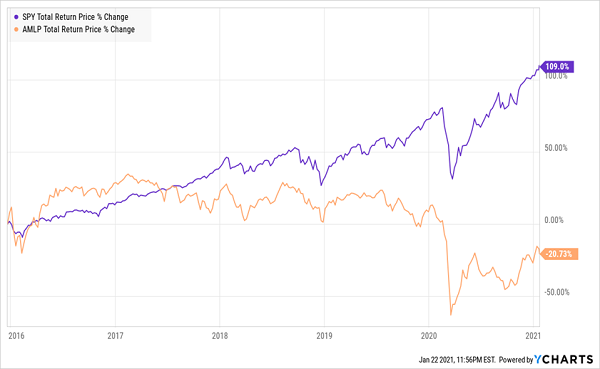 Over time, the economic value of building pipelines, transporting gas and oil and setting up transport depots for these chemicals has fallen because cheaper, safer alternatives have gotten cheaper still. And now we’ve hit the breaking point: solar power is now cheaper than oil, even after crude’s big price drop.

In fact, according to the International Energy Agency, solar is now the “cheapest electricity in history,” noting that solar output will likely grow 43% by 2040 compared to 2018. “Investors are looking with increased skepticism at oil and gas projects due to concerns about financial performance,” notes the IEA.

Cheap Renewables Are Exploding in Usage … 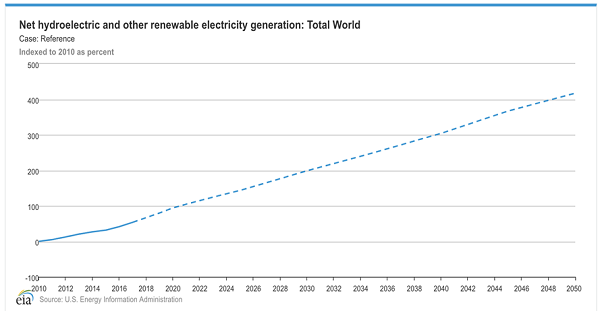 What’s the point in investing in oil or gas today if they’re not the cheapest options and their usage is going to keep falling while other fuels take over? 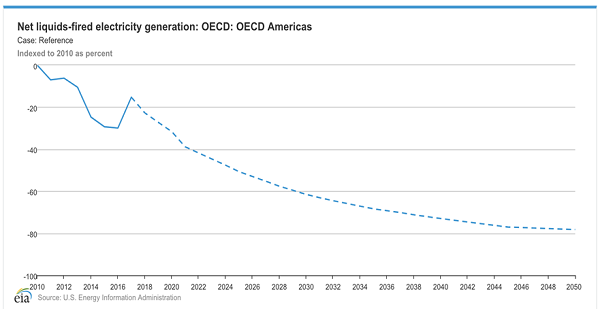 It stands to reason that natural gas and oil will see long-term downtrends, even if there are short-term spikes. That makes them among the least desirable commodities to invest in.

A 10%-Paying Resource Fund to Avoid

That hasn’t stopped net inflows to some energy funds in recent months as yields look too intoxicating. Consider the GAMCO Global Gold Natural Resources & Income Trust (GGN), a closed-end fund (CEF) that yields 10.2% and has been a long-time way to translate natural resources such as oil, gas, gold and other metals, into income. (The fund’s mandate lets it balance itself across the resource sector as management sees fit.) 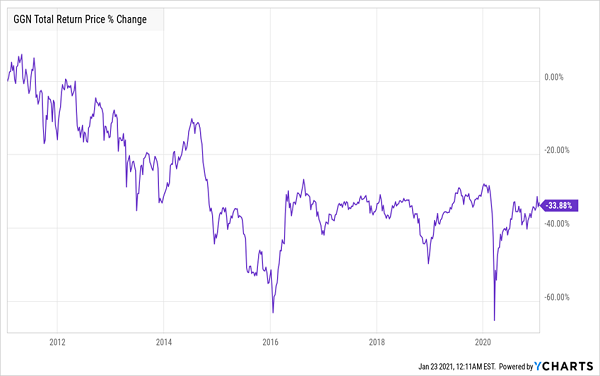 GGN pays you a dividend every month, but that doesn’t mean buying it will keep you in the black. GGN investors are down significantly over the last decade, since well before solar was cheaper than oil.

Buy Alert: These 5 Huge Dividends Are Set to Soar in 2021

Don’t worry—I’m not going to leave you hanging by just telling you what to sell (or avoid!). I’m also going to set you up with my favorite CEFs to BUY for 2021!

The 5 unloved CEFs I’m about to reveal come from across the US economy (and no, none are energy funds!). They pay a rock-solid 8% average dividend now, and they’re also primed to reward you with price upside, too, to the tune of 20% GAINS in the next 12 months, according to my latest analysis.

I’ve prepared a free Special Report revealing all the must-know details on these 5 winning funds. I’m ready to give you your copy now and set up with a no-risk trial to my CEF Insider service, which gives you even more healthy high yielders to pick from: the 20 CEFs in the portfolio yield a steady 7.5%, on average, today. The highest payer of the bunch—a utility CEF that benefits when oil and gas take a hit—pays a life-changing 10.8%!

Your free report and your trial are all set up and waiting for you. All you need to do is click right here and I’ll give you full details on both now.

I can’t wait to show you this comprehensive wealth-building package, which I’ve put together to get you positioned for big dividends and upside in 2021. You’re just a couple clicks away!