Not yet as rich as you always wanted to be? Don’t worry, because today we’re going to dial you in for some “rich guy” dividend favorites that’ll pay you up to 9.9% every year.

Private equity is a lucrative and secretive world. It’s often limited to accredited investors, which means these funds require you to have $200,000 or more in annual income to qualify.

If you’re living on dividends alone, this might be challenging. Fortunately, there are some private equity plays that you can buy just like individual stocks. They trade for as cheap as $12 per share and they’ll pay you dividends from 8.8% to 9.9% along the way:

Private equity (PE)—funds that can invest in the equity and debt of privately held companies, which we typically can’t get our hands on—is generally touted as outperforming the stock market.

The American Investment Council, which advocates for private investment, points out that research from the 1990s and early 2000s showed that “private equity outperformed public markets by 3 to 4 percent each year,” and a 2019 paper investigating more recent “vintage years” finds that “that private equity continues to generate returns that are 2 to 3 percent above the returns of public markets.”

The downside? Privately held private equity firms aren’t exactly easy to tap, and you typically need to have seven digits to get in.

But here’s a back door that you and I can access. We can buy PE-esque investments just like regular stocks with a single-click! The trick is handful of little-known publicly traded companies called business development companies (BDCs).

Congress created BDCs in the 1980s to spur investment in America’s small and midsize businesses, the same way they created REITs in the ‘60s to help mom ‘n’ pop investors tap the real estate markets. And like REITs, BDCs get a generous tax break—if they dole out 90% or more of their profits as dividends to you and me.

Thus, business development companies not only let us access a big pool of investments you and I otherwise couldn’t otherwise dream of accessing, but also deliver sky-high yields that are among the highest you can find in the stock market. The caveat, of course, is that they do come with heightened risk, and not all BDCs are gems.

Today, I’ll show you three notable BDCs—yielding between 8.8% and 9.9%—that should be on your radar screen.

Let’s start out with a yield juggernaut: PennantPark Floating Rate Capital (PFLT), which will get investors awfully close to a double-digit yield at current prices.

PennantPark provides access to middle market direct lending with, as the name implies, a heavy focus on floating-rate loans, though it’ll invest anywhere across the capital structure (senior secured debt, subordinated debt and others).

Its primary target is private equity sponsor-backed companies with $10 million to $50 million in EBITDA. It avoids capex-heavy businesses, as well as fickle industries such as fashion and restaurants, but it still has plenty of sectors to play with. Portfolio companies include the like of primary-clinic operator Cano Health, marketing services provider InfoGroup, and WalkerEdison, whose furniture can be found online via companies such as Amazon.com (AMZN), Target (TGT) and Home Depot (HD).

PennantPark typically leans toward the low-risk but low-reward end of the BDC spectrum, which historically has served it just fine. However, the BDC’s last earnings report raised some credit-quality concerns. The company reported that four of its portfolio companies were on “non-accrual,” which essentially happens when a payment is more than a month overdue, or there’s some other concern about a company’s ability to make a payment.

The BDC was subsequently nailed in May on the news. That has me wary. And the floating-rate nature of its loans, while attractive during periods of rising rates, isn’t a significant advantage right now.

PennantPark (PFLT) Waves the White Flag in May 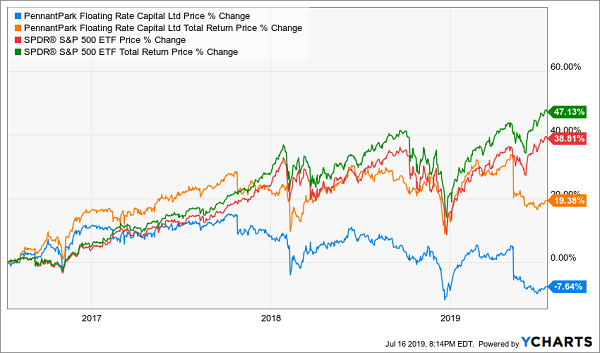 NMFC likes to say that it invests in “defensive growth” industries. It’s a silly, contradictory term, sure. But the qualities it covets in its portfolio companies are, in fact, pretty attractive: high barriers to competitive entry, recurring revenue, strong free cash flow and niche market dominance.

To be fair, New Mountain, like PennantPark, is heavily weighted toward floating-rate loans, which make up 93% of the portfolio. But NMFC is a few steps in the right direction. Its credit quality is stellar – only eight portfolio companies have gone on non-accrual since inception in 2008, and there were no new non-accruals over this past quarter. Better still, the company is a bastion of consistency when it comes to covering its healthy dividend with net interest income (a core measure of profitability for BDCs).

New Mountain, which trades at only a sliver of a premium to its net asset value right now, still should be fine in the current environment. Keep this BDC in mind should the Fed’s hawks ever take over again.

Ares Capital (ARCC) is a slightly more modest yielder compared to the previous two picks, and you likely won’t snag it for a significant discount. But that’s OK—ARCC is worth a small premium.

I’ve beat the drum on ARCC a few times, including in February 2019, but also going back more than two years, in January 2017. I said at the time that the company’s investment spread, as well as a $3.4 billion merger with American Capital, “should benefit ARCC in just about any market environment,” and that “in short, ARCC is going places.”

Let’s look at the tape. 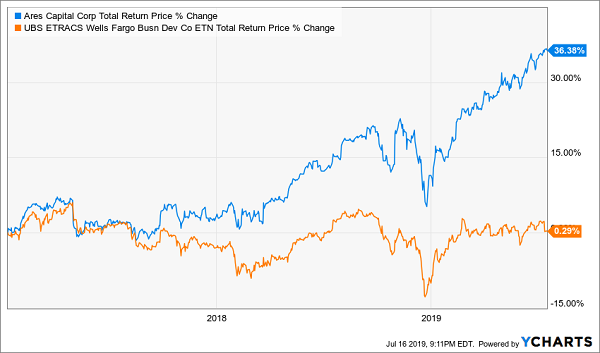 Ares’ core earnings and net realized gains have exceeded dividends every year since 2011, by increasingly wide margins. In fact, the company’s operational performance has been so robust that it has hiked its payout twice since this time last year.

Bottom line: ARCC is a standout in what typically is a difficult industry to invest in.

However, I’m not sure I’d commit capital to this stock right now. Given its recent run up, I’d like to see a pullback for a lower risk entry point.

Instead I recommend considering these eight monthly payers, which remain bargains even with the stock market itself rather pricey.

How Retirees Can Collect $3,000+ Per Month in Dividends Alone

High, sustainable yields are an absolute must for will-be (and already-ditched-work) retirees – especially those who haven’t saved up millions of dollars by the time they crossed the career finish line.

But even if your nest egg isn’t what you hoped it would be, don’t worry. Because the A-plus picks in my “8% Monthly Payer Portfolio” will not only ensure that you have enough income to enjoy your retirement properly – but they’ll also make sure you’re cashing large, consistent dividend checks each and every month.

You don’t need the $5 million that Suze Orman insists you need to retire. You don’t even need to have $1 million saved up. With my 8% Monthly Payer Portfolio, you can live comfortably with a mere $500,000 nest egg.

In fact, you’ll collect a fat $3,125 in pure income each month like clockwork!

This is an easy, buy-and-hold dividend strategy that can net you average 7.5% annual yields … and 10%-plus average price upside to boot. I know financial pundits rarely talk about growing your nest egg in retirement, but that’s a massive mistake. You and I will live far longer into our retirements than old financial models are equipped to deal with.

Get these and the other monthly dividend picks, including two rock-solid preferred-stock plays, that will unlock more than $3,100 in monthly income right now–for free! Click here to receive each and every pick in my 8% Monthly Payer Portfolio—complete with tickers, buy prices and full analyses—at absolutely NO COST to you.