Not every high yield asset is in danger as rates rise. While some stocks paying 3% may feel the Fed’s pressure, there’s a higher subset paying 8% that should do just fine.

If you’re looking for dividends you can actually retire on, you should familiarize yourself with business development companies (BDCs). They tend to pay big yields because they are required by law to dish most of their profits back to their investors as dividends.

BDCs themselves are investment companies that provide funding to small- and mid-size companies (which typically have a difficult time acquiring funding from larger financiers). BDCs were brought to life in 1980 by Congress to spur U.S. business growth, and as such, they have certain requirements, such as investing at least 70% of their assets in American companies that are worth less than $250 million.

BDCs’ appeal to income investors comes via their status as regulated investment companies. They, like REITs, receive tax benefits. And like REITs, they must pay out at least 90 percent of taxable income as dividends — typically resulting in mid- to high-single-digit yields (with 10%+ yields not uncommon).

But what really makes BDCs attractive right now is the fact that rate hikes aren’t necessarily kryptonite for these high-yield machines.

In the past couple of weeks, the U.S. not only saw the Fed funds rate climb for the first time in a year (and just the second time in a decade), but Chicago Fed President Charles Evans said there’s a possibility the Fed could unleash three rate hikes in 2017. And yet, since the Federal Reserve announced that hike on Dec. 14, the Wells Fargo Business Development Company Index is up more than 3%!

Barron’s Amey Stone points out why  BDC profits should actually rise alongside rates:

One advantage of BDCs is that they often borrow at fixed rates (sometimes through the Small Business Administration), which means, as rates rise, at least some of their funding costs would hold steady, while their investments would generate more income.

But a rising tide doesn’t green-light all ships. Let’s discuss a pair of attractive high-yield BDCs right now. And stick around, because I’ll also highlight a popular 8%+ payer that should be sold immediately.

Ares Capital Corporation (ARCC) is one of the biggest players in the BDC space, at more than $5 billion in market cap. It’s also coming off a tremendous 2016 in which it beat the market with 26% total returns – with nearly half coming in the form of cash dividends.

ARCC: It’s All About Income 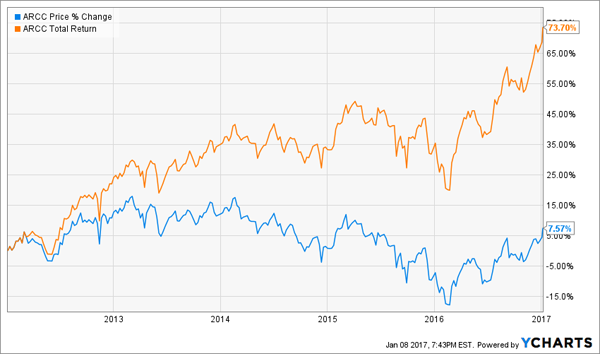 ARCC’s portfolio is large and diversified, consisting of 215 companies with a combined fair value of $8.8 billion. The largest single industry is healthcare services at about 14%, with other allocations to business services (8.5%), consumer products (7.9%), power generation (5.6%) and restaurants/food services (4.6%).

Ares Capital also breaks out its Senior Secured Loan Program – “co-investments with GE Global Sponsor Finance LLC and General Electric Capital Corporation in first lien senior secured loans to middle market companies” – at about 22% of the portfolio, though the company says the 25 borrowers in that program are in similar industries as ARCC portfolio companies.

Geographically speaking, ARCC’s portfolio heavily leans toward western U.S. companies at 40% of the portfolio, but it has double-digit holdings in the southeast, Midwest and mid-Atlantic as well.

That investment spread should benefit ARCC in just about any market environment. So should the $3.4 billion merger with American Capital last May, which was expected to be immediately accretive to core EPS and which should allow Ares to be able to fund larger deals going forward.

In short, ARCC is going places.

FS Investment Corporation (FSIC) is about half ARCC’s size no matter which way you slice it: $2.5 billion in market cap, portfolio fair value of about $3.9 billion and about 103 portfolio companies.

It’s also a relatively young BDC, at least as far as publicly traded life is concerned. FSIC pulled off its initial public offering in 2014, and in that short time, it moved from a monthly dividend to a quarterly payout that currently yields just shy of 9%.

While 21% of FSIC’s portfolio holdings are tied up in capital goods companies, the piece of the pie most investors have been concerned with over the past couple of the years has been energy, which currently is FSIC’s second largest allocation at 12%.

In fact, in a May 2016 report, Moody’s specifically called out FSIC and Apollo Investment Corp (AINV) as being “at a greater risk of an ACR breach from further potential markdowns on their oil & gas investments.” But energy’s rebound helped calm many of those worries, and FSIC enjoyed a fruitful 2016 in which it provided shareholders with 27% in total returns – 11 percentage points of which came from its payout.

FSIC Shows Its Breakout Potential in 2016

Something to like about FS Investment is that more than two-thirds of the portfolio is senior secured loans, with first-lien loans making up the lion’s share of that. Senior secured loans are backed by corporate assets, and often have floating rates – which, as we said, could be a boon amid higher rates.

If BDCs are actually set up to thrive in a rising-rate environment, you’d be much better off holding a big basket of BDCs, not just one or two … right?

The VanEck Vectors BDC Income ETF (BIZD) invests in a collection of 25 BDCs, and it’s a rare bird in being one of the highest-yielding equity ETFs on the market. Many other exchange-traded products achieve high yield through leverage or using debt wrapped up as an ETN, but BIZD is a pure-play product.

Too Many BDCs Could Hold You Back! 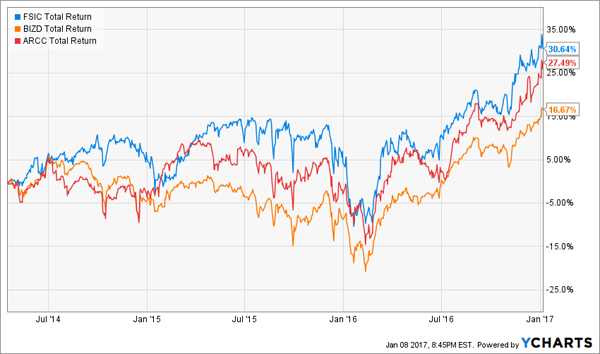 As you can see above, BIZD is an example of how holding most of the players in a space rather than just the cream of the crop can really hold you back. The ETF hasn’t been able to achieve nearly the total returns of ARCC and FSIC. And consider this: 17% of the fund is invested in ARCC, another 10% is invested in American Capital – which ARCC recently bought – and FSIC is another 8% of the fund. So 35% of this fund’s assets are wrapped up in two of the space’s biggest winners anyway.

Moreover, you’re not just eating 58 basis points in expenses each year just for holding the fund, but indirectly, you’re absorbing the inherent expenses in any of the “loser” BDCs that BIZD holds.

ETFs can often be a good idea to gain exposure to various niche investments, but in the BDC space, picking winners is the best strategy.

ARCC and FSIC are the kinds of winning picks you’ll need if you want to be in sound financial straits come this time next year. They offer the juicy dividends that investors need to weather turbulent storms like those we could run into in 2017.

Secure dividend plays like these are a cornerstone of my 8% “no withdrawal” retirement strategy, which allows income investors to rely entirely on dividends and leave their principal 100% intact.

To do this, I seek out stocks and funds that:

And I talk to management, because online research isn’t enough. I also track insider buying to make sure these guys have real skin in the game.

Today I like three “blue chip” funds as best income buys. They provide the type of diversification you want for your retirement portfolio without sacrificing any returns.