Inflation hasn’t been a problem for a long time. In fact, central banks around the world have been fighting deflation, as low growth, pessimistic expectations and slumping oil prices kept prices in check since the 2008/09 crash.

That’s changing, and more people—from economists to everyday consumers—see inflation heating up. That makes now a great time to buy into an asset class few investors pay attention to. I’ll explain why, and name two of my favorites, in a moment.

First, back to inflation: according to the New York Federal Reserve, consumers now expect prices to swell by 2.8%—the highest reading since the middle of 2015. No real surprise there, when you consider that the consumer price index is rising at its fastest pace in over a year:

Economists, for their part, predict higher inflation for the next five years:

If you’re trying to allocate your portfolio between stocks and bonds, higher inflation will have enormous implications for you, including a drop in the value of US Treasuries.

This is already happening, and many risk-averse investors are already panicking. To demonstrate this, we just need to look at how Treasury ETFs have done over the last year. We would expect the shorter-duration funds to do better than those with longer durations, but all have had pretty bad returns. 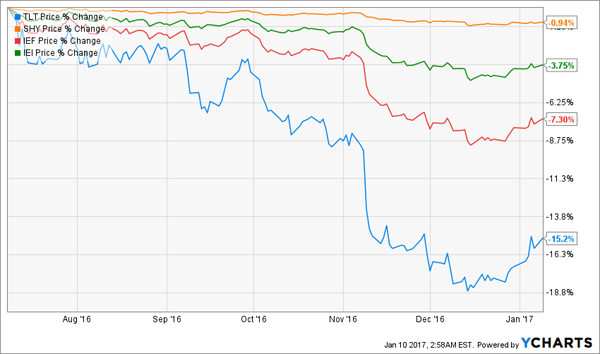 Looking at this chart, you might be tempted to think all the pain is already priced in. It isn’t.

If we go back seven years, to just after the global financial meltdown and the dawn of the market recovery, we see that the long-term bond funds above have all posted double-digit price gains to this day:

Not a Full Correction Yet 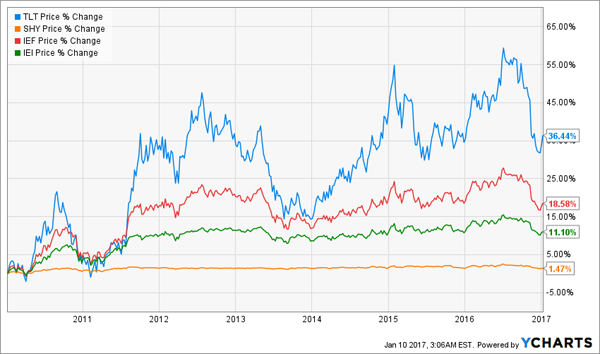 It looks like the long-term bond funds have not yet corrected from their steep appreciation during years and years of weak inflation and expected deflation. Many people believe higher inflation is coming, but not everyone is convinced; as a result, the steep sell-off in Treasuries has only begun.

If it continues, I don’t want to be there.

Where do I want to be instead?

Ideally, I see tremendous value in betting heavily on equities and corporate bonds through high-quality and undervalued funds. But if you’re worried that adding to your holdings in these areas might load you up with too much risk, consider some highly underpriced municipal bond funds instead.

Why munis? Like Treasuries, they go down as inflation expectations rise. The impact of bond duration also makes these bonds as sensitive as Treasuries, meaning their performance runs almost parallel to that of Treasuries: 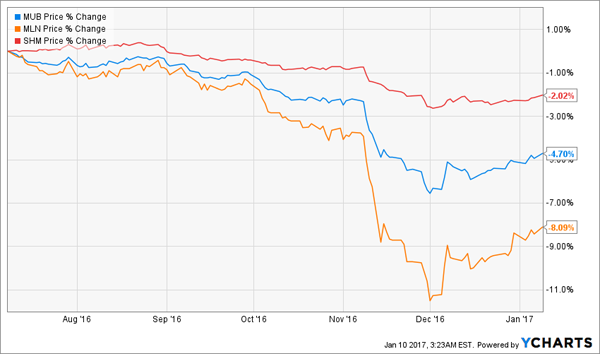 As you’d expect, the long-term VanEck Vectors AMT-Free Long Municipal ETF (MLN) is the worst performer in the group, while the SPDR Nuveen Bloomberg Barclays Short-Term Municipal Bond ETF (SHM) has fared the best. Also note that the return on the diversified iShares AMT-Free National Municipal Bond ETF (MUB), which has both long-term and short-term muni bonds, is right in between these two funds.

When we compare these funds to their Treasury-focused cousins, we find that short-term municipal bonds are currently mispriced. 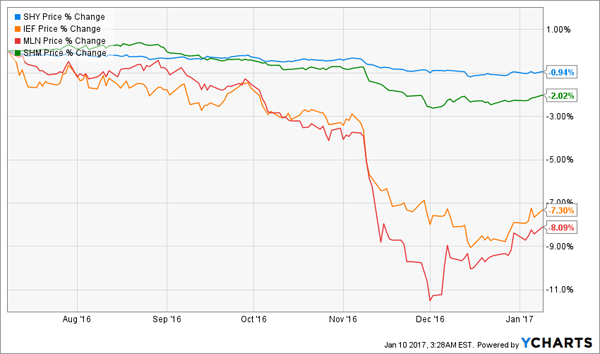 SHY and SHM is 108 basis points. What’s more, MLN’s duration (a bit over 10 years) is actually longer than IEF’s (7–10 years), which means it should be underperforming IEF even more than it is.

This tells us that short-term municipal bonds are currently oversold. Since these are almost as low risk as US Treasuries, they’re also a great alternative for the “safer” part of your portfolio right now.

But don’t buy SHM just yet. There are much better shorter-term municipal bond funds out there.

One of my favorite municipal bond funds right now is the Western Asset Municipal High Income Fund (MHF), which pays a 4.2% dividend yield and is currently priced at a 6.4% discount to its net asset value (NAV)—although it traded at a premium to NAV earlier in 2016:

MHF Oversold in More Ways than One 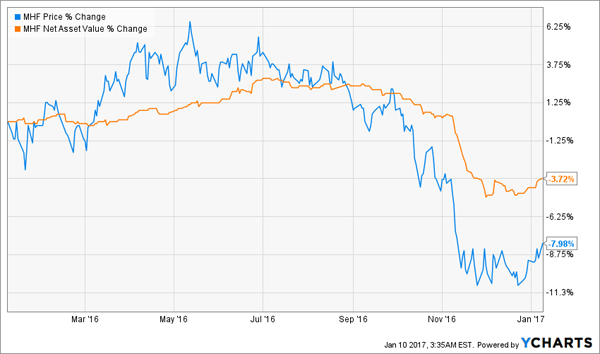 The effective duration on this fund is a bit long—six years—but that doesn’t bother me too much because MHF is historically priced at a 2.6% discount to NAV, versus its current 6.4% discount.

Still, if I want to get shorter-duration bonds, I can also buy Eaton Vance’s Municipal Bond Fund II (EIV), which is trading at a 7.9% discount to NAV and pays a whopping 4.8% dividend: 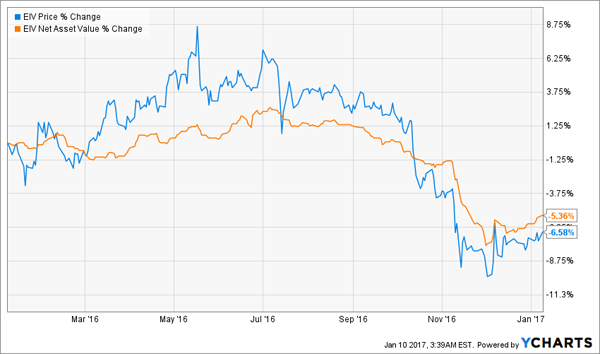 Again, EIV is showing us a familiar pattern: recent weakness and a silly discount to NAV after pricing at a premium less than a year ago.

These muni-bond ETFs are terrific buys for income, and the fact that the herd has ignored them means we can enjoy those above-average yields at a fat discount, too.

That’s a great situation to be in.

But don’t you want your yields to be more than just “above average”? I know I do, because the more yield I can grab now, the less money I have to save to generate a decent income in retirement.

Many people will tell you that any investment paying more than, say, 6.0% will bring you a lot of sleepless nights. But these are likely the same people who ignore munis and simply buy the highest yielders from among the so-called Dividend Aristocrats.

My advice? Don’t listen to them. Because the truth is, you can have high yields and safety, too.

Which brings me to three funds I like even better than EIV and MHF: they yield 8.2%, 9.1% and even 10.1% today and trade at much higher discounts to NAV.

Here’s what that means for you: if the market takes a tumble, those unusual discounts mean these three funds will simply trade flat … and we’ll enjoy those 8.2% to 10.1% yields.

But most likely, they’ll jump 10% to 15% … and we’ll still collect those fat dividends!

So don’t let your cash stagnate in overpriced names dribbling out sub-par dividends. Let my 3 favorite fund picks bring high income, safety and gains to you.  Click here and I’ll reveal their names and show you my complete income investing strategy.