5 Trump-Proof Pharma Dividends Up To 5.3%

Donald Trump needed just 20 minutes to knock $24.6 billion in value from the nine biggest Big Pharma companies. That was the statistic bandied about recently when the president-elect, at a much-anticipated press conference, declared that pharmaceuticals are “getting away with murder.”

That’s ironic, because investors targeting the sure-fire dividends of Big Pharma stocks might be able to get away with theft.

Trump hasn’t yet entered the Oval Office, but he’s already showing an uncanny knack for creating quick stock dips with just a sentence or two. For instance, in mid-December, he criticized the high spend for Lockheed Martin’s (LMT) F-35 jets, knocking LMT shares down by a few percent. But Lockheed almost completely recovered between then and Jan. 10, and those who bought in at the post-tweet lows are actually up 4%.

And while General Motors (GM) initially slipped on Trump’s Jan. 3 message “Make in U.S.A. or pay big border tax!” – in reference to Chevy Cruze production in Mexico – GM pointed out Trump’s inaccuracies and has gained more than 9% to beat the market so far in 2017.

Donald Trump said during his press conference that “there’s very little bidding on drugs. (The U.S. is) the largest buyer of drugs in the world and yet we don’t bid properly.” Price negotiation by government programs such as Medicare would almost certainly drive down prices, sparking fear in the pharma and biotech industries, causing stocks like Pfizer (PFE) and Eli Lilly (LLY) to drop a couple percent out of fear that constantly increasing prices might be a thing of the past.

But Wall Street’s reaction looks premature, and investors likely just received the gift of a quick discount in some of Big Pharma’s strongest dividend payers.

While Congress has been happy enough to go after a couple of individual companies like Mylan (MYL) and Valeant Pharmaceuticals (VRX), little has been done at scale to force pharma companies to keep prices down. That’s unlikely to change under a GOP-controlled House and Senate, where the drug companies poured money into Republican candidates in 2016 to keep the Democrats from gaining power in both chambers.

Today, I’m going to show you five “Trump-proof” pharma dividend stocks. I say they’re Trump-proof because, as Trump himself said, “Pharma has a lot of lobbies, a lot of lobbyists and a lot of power” – and that means true reform is a pipe dream, especially with the GOP in power. But these companies also generate much of their revenues overseas – a vital buffer in the unlikely event Trump does convince his party to cave.

Pfizer (PFE) is one of the oldest and most successful pharmaceutical companies of all-time, and while much of that success has come on its own innovations, Pfizer has taken to wielding a fistful of cash to boost its pipeline where necessary.

Within the past couple of years, Pfizer has outright acquired (or announced the acquisition of) Anacor Pharmaceuticals, Hospira and Medivation, while also acquiring pieces from GlaxoSmithKline (GSK) and AstraZeneca (AZN). The Hospira buyout packed a punch almost immediately, with the company contributing $1.2 billion of Pfizer’s $14 billion in revenues for Q4 2015.

More importantly, while Pfizer is based in the U.S., its business is heavily international in scale, with barely more than half of its Q3 2016 revenues coming from the U.S. Better yet, almost 20% of revenues came from growth-happy emerging markets.

And, as I’ve recently pointed out, Pfizer’s cash flow is more than enough to cover its briskly growing dividend. 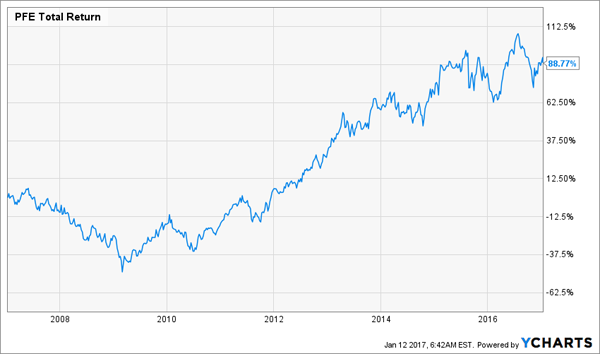 Swiss pharma outfit Novartis (NVS) admittedly has some bumps and bruises from 2016, but the flipside is that this big multinational dividend stock can be had at a pretty reasonable valuation.

Novartis’ businesses are wide-ranging, from its Sandoz division of generic pharmaceutical drugs and biosimilars, to Alcon surgical and vision care products to its oncology unit, which also folds in rare-disease medicines.

In fiscal 2015, just 37% of Novartis’ revenues came from the U.S., with slightly less than that in Europe, and some 21% coming from Africa and Australasia. Meanwhile, thanks to a 16% tumble in 2016, shares can now be had for just 15 times forward earnings projections.

Novartis on Sale After Difficult 2016 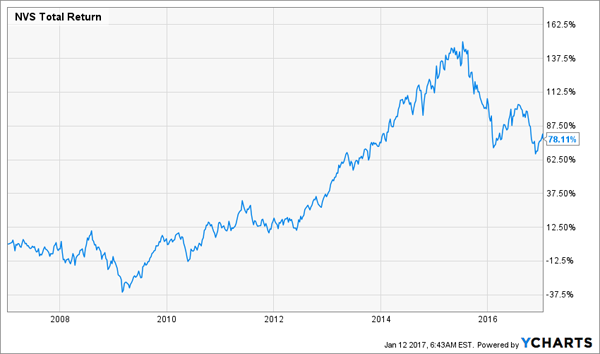 U.K. pharmaceutical giant GlaxoSmithKline (GSK) also had a difficult 2016, off 6% — far worse than the S&P 500’s 8%-plus gains, though certainly better than the 13% loss by the broader iShares U.S. Pharmaceuticals ETF (IHE).

GlaxoSmithKline is one of several pharma stocks that could be on the rebound trail in 2017, thanks in part to new HIV and respiratory drugs, as well as the potential for an FDA approval on its shingles drug this year. Also, a weak British pound could bolster the company’s results; its CEO in October said the country’s currency issues could boost earnings per share by 21%, vs. estimates of 19% in July.

And as far as American protection goes? A mere 38% of GSK’s revenues came from the states in Q3 2016. A 5%-plus dividend sure doesn’t hurt, either.

GlaxoSmithKline Can Bounce Back 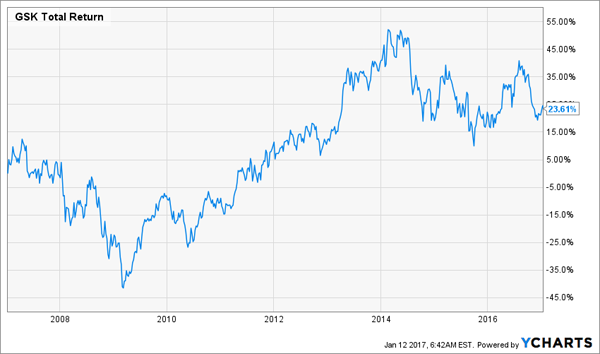 Sanofi is looking to spend to expand its offerings even more, though it’s having a little difficulty on that front. Pfizer beat out Sanofi in a race to buy out Medivation in mid-2016, and Johnson & Johnson (JNJ) recently swooped in to take out Sanofi target Actelion, which boasts a large rare-drug portfolio.

Still, Sanofi in 2016 expected to launch six major drugs between then and 2020 to help drive growth. In the meanwhile, you can earn 4% in income, and know that Sanofi is mostly protected with only about 40% of revenues coming from the U.S.

Sanofi Will Try to Buy Its Way to Recovery 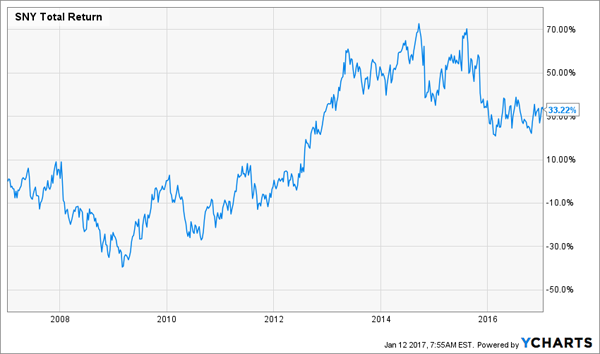 Teva Pharmaceuticals had a woeful 2016, slipping 45% for a laundry list of reasons, including piling on debt to buy Allergan’s (AGN) generic drug unit, Actavis, and a lowered full-year financial forecast in November.

However, life could actually get much better under Trump.

Teva’s percentage of revenues from the U.S. recently slid from 57% to 52%, so the generics specialist is at least somewhat protected in that respect. That said, cheap generics are also far less likely to be a target of any legislation aimed at driving down drug prices.

Better yet, Trump’s healthcare advisors have said they want to quicken the pace of generic drug approval by speeding up the review process, alleviating pressure off a deep backlog of 3,000 Abbreviated New Drug Applications (ANDAs). Teva’s drugs represent roughly 10% of those ANDAs, meaning a hurry to push more generics through could easily benefit this Israeli pharma outfit.

And one upside to last year’s spanking? TEVA shares now yield a thick 4%. 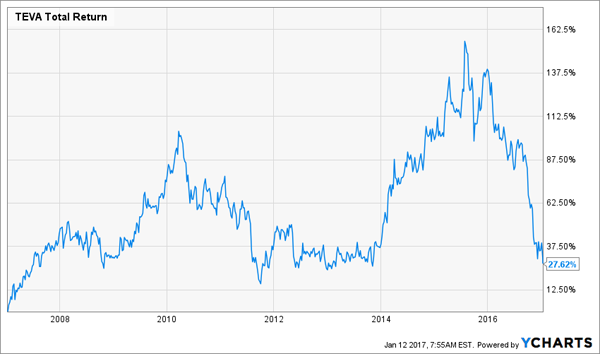 It’s hard to go wrong with blue-chip pharmaceutical stocks like Pfizer and GlaxoSmithKline over the long-term. While some years might not be as fruitful as others, they’re financially sturdy companies that play to one of our generation’s most powerful mega-trends.

Secure dividend plays like these are a cornerstone of my 8% “no withdrawal” retirement strategy, which allows income investors to rely entirely on dividends and leave their principal 100% intact.

How is it possible? Well, I seek out stocks and funds that:

It takes some serious research. I have to talk to management because online tools simply aren’t enough. I also track insider buying, because I want corporate leadership that actually has skin in the game. That way, you know they’re interested in making shareholders money!

Today I like three “blue-chip” funds as best income buys. They provide the type of diversification you want for your retirement portfolio without sacrificing any returns. And the yields … oh, the yields! These three slam-dunk income plays pay out 8.2%, 9.9% and 10.1% in dividends. And they trade at 10%-15% discounts to their net asset value (NAV) to boot!

These funds are perfect for your retirement portfolio because your downside risk is minimal. Even if the market takes a tumble, these top-notch funds will simply trade flat… and we’ll still collect those fat dividends!