Did you miss the Brexit bounce? Sure, much of the easy money has been made – but not all of it.

Stocks headquartered in the U.K continue to languish. Some deservedly so, but there are a few fantastic companies trading at big discounts to their usual market prices.

As we saw last week, fortune favors the bold (and the quick). Here are three stocks in three sectors set to rally strongly from Brexit weakness for the bold investor.

The Royal Bank of Scotland (RBS) is no stranger to wild swings, even though it happens to be the fourth largest U.K. bank by market cap. The stock has been a pummeled since the global financial crisis: 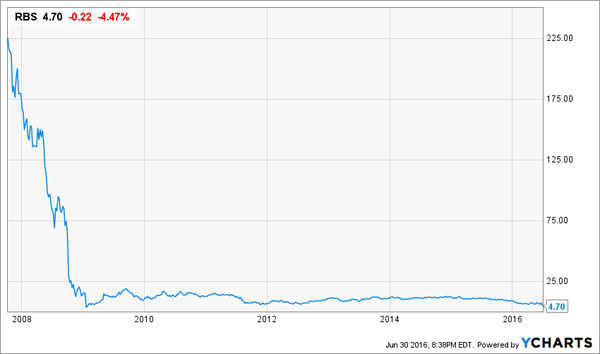 Although RBS currently has no dividend payout, there are some huge factors that outweigh this grievance.

The first is from fabled investor Peter Lynch: “Whatever the queen is selling, buy it.” After the rescue of RBS by the British government in late 2008, the Crown now holds about 73% ownership in RBS. The sale of these shares to the public will be a firesale, and savvy investors love nothing more.

Secondly, Royal Bank of Scotland is currently selling at 35% of its book value, the value of the assets it can lay claim to as a business. The fourth largest bank in the financial capital of the world selling at 65% discount to what its underlying assets would fetch on the open market? Sign me up. Not only are we getting the banking business for nothing, we’re literally being paid to invest in it!

Yesterday’s losers are often tomorrow’s winners, and RBS could very well be the cream of that winning crop. This is truly a window of opportunity, as buying pressure from the Crown’s selling, diminished worry over the state of the U.K., and a possible dividend institution at some point in the future will make this stock an easy bet. Why miss out on a stock that will triple just by being fairly valued?

The healthcare sector as a whole has been rather sickly in 2016. Concerns over supposed government regulation on pricing has left a devastating trail of red for huge, profitable companies in major markets around the world.

Some companies, however, have proven resilient to forecasts of woe. Chief among these is the drug manufacturer GlaxoSmithKline (GSK). 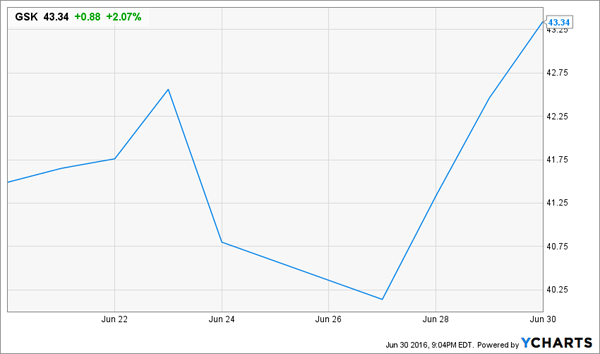 Investors know that healthcare needs are only increasing, and this $100 billion company is well-positioned for future profits.

Worried about the current state of the markets? The concerns swirling around international markets are considerable, and investors are seeking safety in droves. Established pharmaceutical companies are a perfect haven for the defensive investor, and this top ten pharmaceutical in the world offers a defensive investor the chance to invest for big profit while sleeping well at night.

And the World Still Runs on Oil

When it comes to paid waiting, investors in BP (BP) are no strangers. The infamous BP Oil spill from 2010 brought the reputation of the integrated energy giant crashing down along with its share price. Historically a mega-yielder, BP froze its dividend for the rest of the year, but resumed paying out after a 50% cut in 2011. 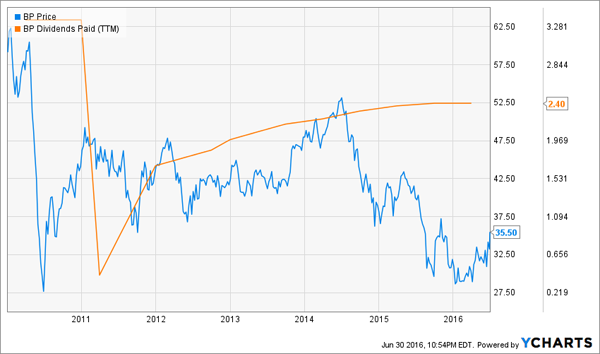 BP has steadily raised the dividend payout before capping it due to the oil rout. Even so, a 7% yield from a $100 billion company is nothing to sneer at, and a recovery in oil prices will rejuvenate the share price and dividend growth as well.

BP’s share price took a hit in the market tumult after the Brexit vote, but has since recovered. The real impact that the referendum had on BP, however, was in driving the British pound lower against the dollar, meaning that profits repatriated from across the pond are increased almost 10% from the start of the year alone.

The currency blessing is a curse for other large oil and gas companies headquartered in the U.S., whose dwindling profits have been further cut by the strong dollar in the last 18 months.

So what does BP offer to the opportunistic investor? Positive international exposure, getting a big check to be patient, and massive upside to the currently depressed share price. Morgan Stanley seems to think so, recently reporting an upgrade of BP to overweight with a price target over 12% above its current price.

All three of these companies mentioned have great prospects ahead in spite of the U.K. vote to leave the European Union, but they aren’t for everyone. The uncertainty surrounding global markets makes safe investments a must, but it is quite difficult to find conservative stocks with dividends for much-needed income.

In this environment of risk, my favorite investments are well-managed funds that pay generous dividends. Specifically I like 3 closed-end funds with massive dividend yields trading at a 10-15% discount to the value of their holdings. We’re able to get these massive dividend payouts of 8%, 8.4%, even 11% on sale compared to what their holdings are worth!

But it’s important to buy them now, because the “Bond God” himself Jeffrey Gundlach is talking them up in the financial media. Click here for the details on these 3 perfect high yield investments, along with their names and tickers.