Utilities are on fire. As boring as they may be, stocks in this sector have been climbing higher and higher in 2016, thanks to one major trend: investors are desperate for yield, but they don’t want risk.

With many high yielding assets coming with high risk, investors are looking for safety, and utilities are seen as a safe alternative. As U.S. Treasuries hit historical lows and corporate bond yields slide further, utilities become a huge attraction.

It’s no wonder, then, that the Utilities Select Sector SPDR Fund (XLU) is up 20% over the past year, with virtually all of those gains coming in the last six months. To put that in perspective, XLU gained 24% from 2012 to 2015, meaning that it’s gained almost as much in the first half of this year as it did in the previous four years.

With such a sudden, meteoric rise, it’s natural to worry about getting into the sector too late. This is especially true for utilities, “boring” stocks that see modest capital gains and are usually bought-and-held for dividend growth. But utility dividend growth is limited, so buying XLU and getting a yield below 4% isn’t a great deal—effectively, you’re overpaying for low dividend growth. 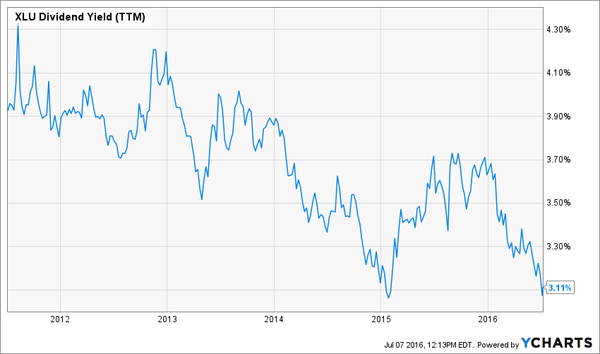 With XLU’s dividend yield falling precipitously, now is not a good time to blindly buy utilities. You need to be selective and find the ones that haven’t gone up too much, and still offer enough earnings growth to justify buying right now.

It’s not easy finding utility stocks with a wide moat, good dividend coverage, and limited price growth in the last year. But the market has still overlooked some true gems with strong and growing operating margins and solid dividend coverage.

My first pick is FirstEnergy Corporation (FE), a utility stock yielding 4% that is up just 4% in the last year.

Did the Market Forget FirstEnergy? 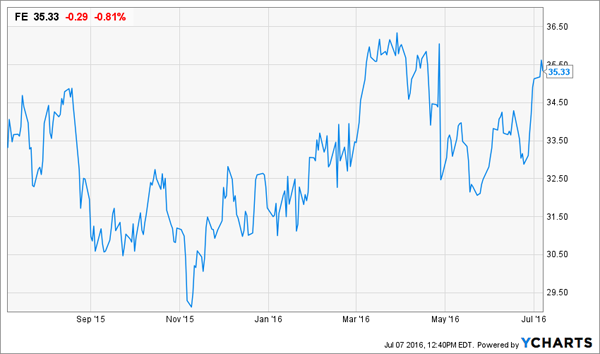 Yet the company’s operating income jumped 83% in 2015 from the prior year and rose 30% last quarter on a year-over-year basis. 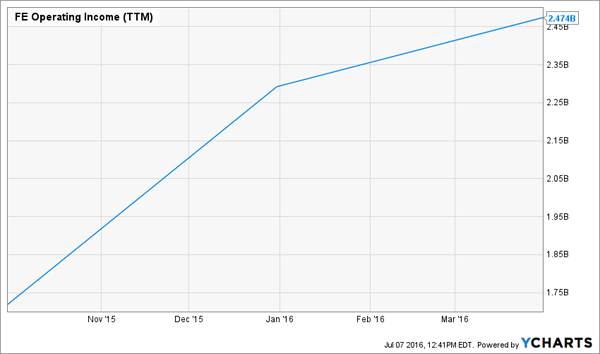 Cash from operating activities was also up over 25% in 2015 from the prior year, helping the company easily pay its dividends, which represent just 23% of cash from operations.

With diversified holdings throughout America’s midwest and mid-Atlantic, FirstEnergy has invested in all sorts of conventional energy properties, as well as hydroelectric and renewables. So no matter where the market goes, FE is likely to be there.

Second is a natural gas pure-play: AmeriGas Partners (APU), a limited partnership with an impressive 8% yield. APU is actually down 1% over the last 12 months, thanks in no small part to trends in oil: 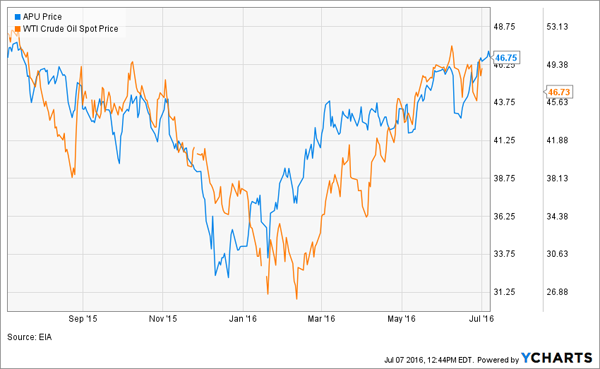 But why should the price of oil impact a company whose main business is selling retail propane in every state in America? It makes no sense, especially since AmeriGas’s revenue is up and the company has grown cash from operating activities 9% year-over-year and easily covered dividends from its operating cash flow. Admittedly, operating income has been a bit choppy lately, but it’s been generally increasing over the last 5 years: 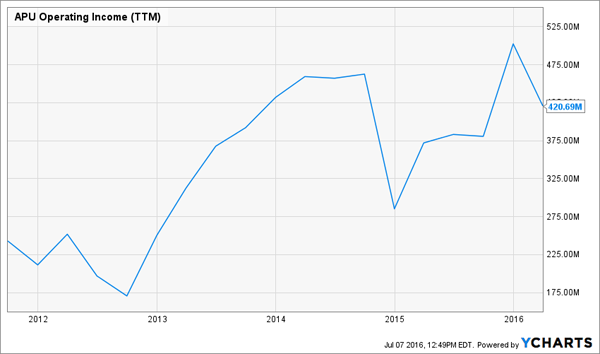 Meanwhile, and most crucially, the stock has been increasing its dividends, even when the crash in energy commodities caused many energy companies to halt dividends entirely:

Income Still on the Rise 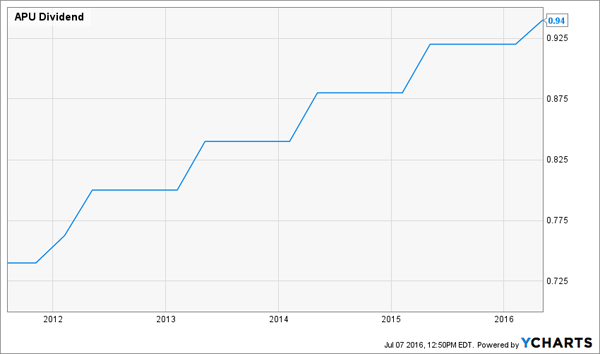 With a 27% income increase over the last 5 years, holders of APU have seen their dividend checks get fatter and fatter, even as other energy investors got burned.

Utilities are doing great, which means you should just hold all your utility stocks and enjoy the fat dividend checks, right? Wrong.

Some utility stocks have been swept by investors’ thirst for yield, causing high prices that are unjustified, meaning it’s time to swap them out for something better.

The most obvious sell candidate is ONEOK Inc. (OKE), a natural gas specialist based in Oklahoma with broad market penetration in its home state and throughout the southwest and midwest. The stock’s over 5% dividend yield is enticing, but it’s 20% price growth in the last year is not:

A Sharp Fall, and Rise 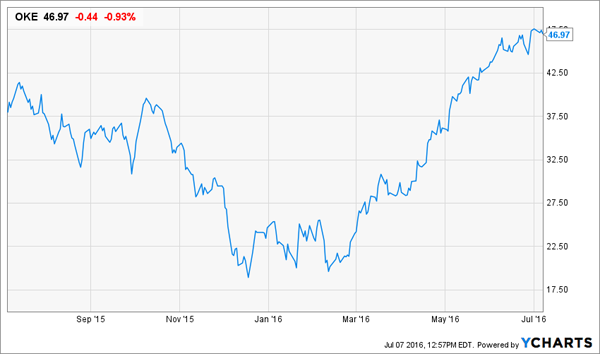 Note that OKE was one of the biggest losers in the volatile days of early 2016, plummeting 50% in a few months. Since then, it has recovered a whopping 90%, providing a tremendous return for anyone who caught the bottom. Good for them—but now it’s time to get out.

Thanks to its meteoric rise, ONEOK’s P/E ratio is 36, about one-and-a-half times as much as my buy recommendations. Are you getting big growth for that price? No. EPS is up 38% in the last quarter from a year ago—good, but not great. That’s especially true when we see that cash from operating activities rose just 28% last year from the prior year and dividends account for half of the company’s operating cash flow. And, those are good numbers, but the numbers for my buy stocks are much better.

My next sell recommendation is for a utility stock that hasn’t shot up with the market. Actually—it’s down over 20% in the last year. I’m talking about E.ON Energy PLC (EONGY), a German utility stock that has gained some interest from American investors thanks to its rapid expansion in the North Sea and its retail energy distribution in the UK. But Brexit changes everything. 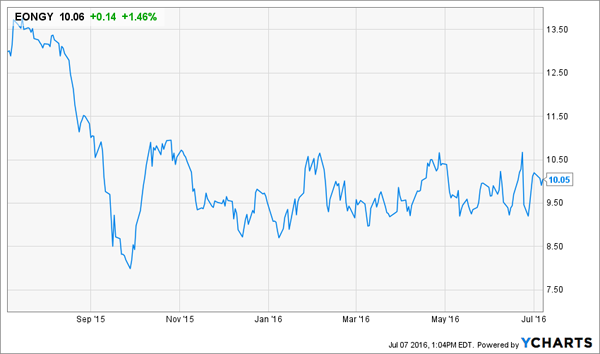 Why not? Simple: the company is profitless. Operating income was an amazing negative $4.3 billion in 2015, of course due to EONGY’s oil exposure. While that’s jumped in the first quarter of 2016 thanks to a lift in oil, the company’s operating margin, at 8.4%, is still far too low to justify the risk.

And beyond that, the risk of an economic slowdown in Europe is a big one for E.ON. If there is less economic activity, there is less energy consumption, and less demand for E.ON’s products. If economic activity doesn’t slip in Europe—a virtual impossibility in a post-Brexit world—then E.ON is still severely exposed to the regulatory, logistic, and legal quagmire that Brexit will pose. The market hasn’t priced these risks in yet, but it should.

It’s possible to make strong profits and get a strong income stream from utilities, but you can’t do it by just buying an index—not at these price levels. And you can’t just blindly choose a utility stock and hope for the best. With major macroeconomic changes and volatile commodity markets, you need to be shrewd and bet on companies with solid profits and expanding dividend coverage potential.

Also, you need to diversify your holdings against future downfalls in energy. You can do this by choosing high yield stocks and funds with durable income and growth potential.

My top recommendation? A group of funds that yield 8% or more while offering dividend growth potential.

Now we don’t have much time to jump into these funds. They were recently trading at a massive discount, but now that the Fed has finally admitted it’s not raising rates anytime soon, investors are starting to pile into these 8%+ payers with 15% upside. Which means the best time to buy these high-yield investments is right now – click here and I’ll share the details along with the names, tickers and buy prices for these issues.