If you’re betting that President-elect Trump’s economic policies will ignite corporate profits—and share prices—I have two words for you: be careful.

In a moment, I’ll show you how I’m investing in the early days of the Trump era and name 3 rare finance-sector bargains that are terrific buys now.

First, let’s look at how much things have changed (and not) since Election Day, starting with the S&P 500, which has jumped 6.0%. However, most of that came in the first month: since December 8, it’s basically gone nowhere. 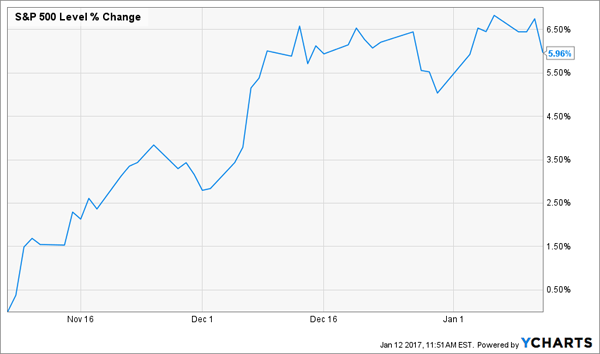 Numbers like that are rattling investors’ nerves—and moving “safe” assets, like Treasuries, further up their buy lists: here’s how the yield on the 10-Year has moved since the vote (remember, yields fall as bond prices rise, and vice versa).

Investors Lose Their Appetite for Risk 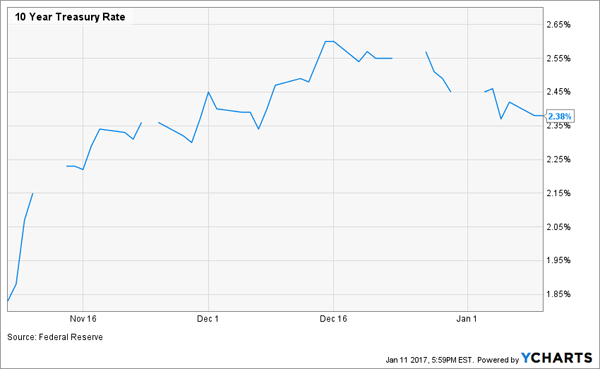 Another sign stocks are getting ahead of themselves? History.

Consider that since 1945, the first year of a Republican presidential term has ended with a lower S&P 500 two-thirds of the time, according to CFRA Research.

I know what you’re thinking: Trump is far from your typical Republican president. I won’t deny it.

But these aren’t the only signs that we could be in for weaker growth—and for longer than most people think. That’s exactly what Bill Gross, the legendary Bond King, sees in the long run, even if Trump’s able to juice US GDP over a one- or two-year period.

“President-elect Trump tweets and markets listen for now, but ultimately their value is dependent on a jump-step move from the 2% real GDP growth rate of the past 10 years to a 3%-plus annual advance. Three percent growth rates historically have propelled corporate profits to a somewhat higher clip … I, for one, am skeptical of the 3 and more confident of the 2.”

I agree, for the same reason as the Bond King cites: deep-rooted trends, like an aging workforce and robots eliminating high-paying factory jobs, will ultimately cap GDP growth—and earnings along with it—for the next decade or two.

Where to Find Growth Now

Don’t worry, though. You can still find growth in a market like this. But you can’t do it by simply screening for stocks with bargain P/E ratios (of, say, 15 or less) and earnings growing faster than those of their peers.

Instead, look to a factor first-level investors constantly overlook: a continuously rising dividend. As I’ve written before, stocks throwing off predictable payout hikes, year in and year out, beat all other kinds of companies in any market weather.

Which brings me back to the three finance stocks I mentioned earlier, the first of which is life insurer Prudential Financial (PRU).

Look at how the New Jersey–based company’s shares have marched higher in lockstep with its payout in the past three years (the stock boasts a forward yield of 2.6% today): 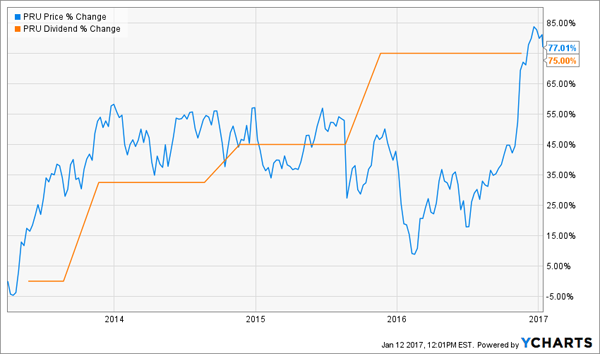 PRU also boasts two other pluses: a bargain valuation and a management team sharp enough to jump on that opportunity and buy back shares.

As I write, the stock trades at a laughable 79% of book value (or what it would be worth if it were broken up and sold off today). That’s despite the fact that, as a life insurer, it’s well positioned to profit from the three rate hikes the Fed’s planning this year; PRU invests its “float”—or the premiums it takes in—in low-risk, interest-bearing securities.

Which brings me to back to the buybacks. Check out how its stock price has risen as management has taken more shares off the market: 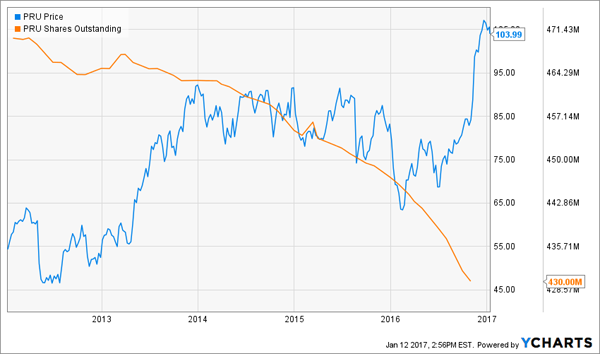 Further payout growth and buybacks are a lock: PRU paid out a ridiculously low 6.6% of trailing-twelve-month free cash flow (FCF) as dividends, and its balance sheet gives it plenty of ballast, with more cash and short-term investments ($30.0 billion) than long-term debt ($22.4 billion) as of the end of the third quarter.

That’s a question you may be asking if you hold title insurer Fidelity National Financial (FNF). The stock has totally missed out on the rally in financials since Trump’s win: 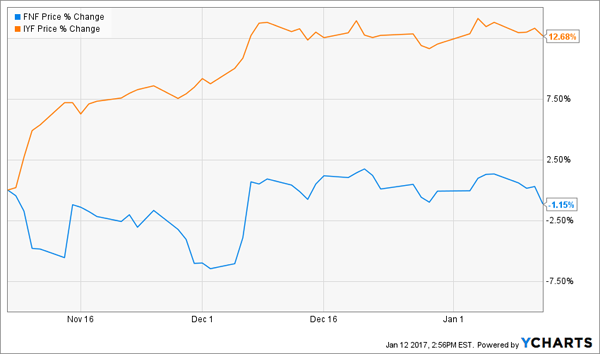 Not only has the midcap title insurer actually slipped in value since Election Day, it boasts a forward price-to-earnings (P/E) ratio of just 13.7, well below its five-year average of 15.8.

That’s way too cheap for a company that grew earnings at a 9.4% year-over-year clip in the third quarter and has more than doubled its payout in the last six years. The stock pays an above-average 2.9% forward yield today.

The discount stems from fears that higher interest rates will hurt the housing market. But with the yield on the 10-Year stalling and December bringing the biggest rise in wages in seven years, this market has plenty of pop left.

Either way, the dividend is safe: FNF’s payout ratio is easily manageable, at 40% of earnings and 33% of FCF. And to say the balance sheet is healthy would be an understatement: FNF boasts just $2.75 billion of long-term debt, or a reasonable 24% of its market cap, and $1.58 billion of cash and short-term investments.

AXP Won’t Be This Cheap for Long

Another way to spot a dividend grower that’s overdue for a pop is to look for companies whose share prices have badly lagged their dividend growth, as is the case with American Express (AXP): 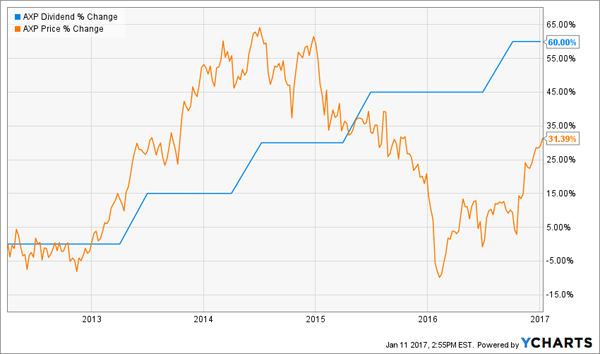 As you can see, AXP’s payout is up 60% (or about 12.5% annualized) in the nearly five years since AXP resumed its dividend hikes following the Great Recession, while its share price has only gained 30.7% (or about 6.4% annualized). That suggests it’s past time for a catch-up.

Another sign a big surge could be imminent? The brokerage industry is finally catching on: last week, Oppenheimer put a 12-month price target of $98 on the stock, or about 29% above today’s levels, citing rising travel spending and a lift from Trump’s tax policies.

Meantime, buying now gets you a stock trading at 11.0 times the ample $6.90 in per-share FCF Amex has generated in the last 12 months—a big discount to rivals MasterCard (MA) and Visa (V).

Healthy Cash Flow at a Discount 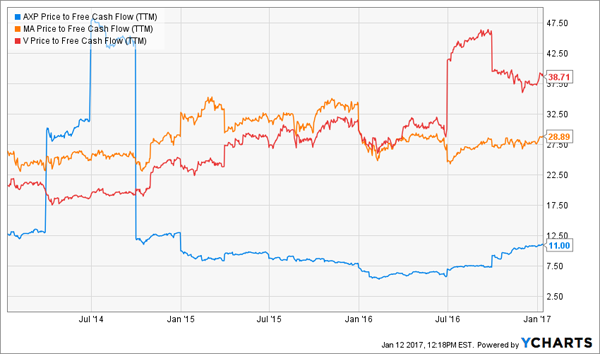 The dividend yield is unexciting, at 1.6%, but AXP’s strong payout growth is a big plus, and that will no doubt continue: just 18.1% of FCF found its way into shareholders’ pockets as dividends in the last 12 months.

All these stocks are rare bargain buys in a finance sector that’s definitely gotten ahead of itself, but between them, they still throw off just a 2.4% average yield, so even with their outsized payout hikes, it’ll be a long time before you get up to an 8.0% yield on your initial buy.

Because that’s what I call the retirement sweet spot: what you’d need to generate a $40,000 annual income stream on a modest $500,000 nest egg without having to sell shares to supplement that income.

And one thing’s for sure: messing around with 1% to 3% payers isn’t going to get you there … in any realistic timeframe, anyway.

But don’t worry, you can hit that magic number right out of the gate, thanks to our new income portfolio. It throws off a safe—and growing—8.0% income stream, almost four times higher than the average you’d get from investing in AXP, FNF and PRU today!

Best of all, it won’t keep you up at night, thanks to its unbeatable diversification. This rock-solid retirement portfolio is built on 6 proven money-makers from wildly different corners of the market. That helps protect your nest egg while it generates a rising stream of income for you!

We took the wraps off this powerful new “8.0% income portfolio” just a few weeks ago, and I can’t wait to show it to you. Simply go right here to get all the details—including the names of the 6 unsung income wonders it’s built on—now.