This 5% Yield Dog Is About To Have Its Day

It’s been a brutal year for tech stocks, and one of the hardest hit names in the sector has been Intel Corporation (INTC). And unfortunately, things seem to be getting worse lately – not better.

Case in point: Intel stock is down more than 40% year-to-date, with a decline of almost 20% coming in the last month or so after very disappointing Q2 results at the end of July.

With returns like this, there are really only two ways to view the chipmaker as it trades at the lowest levels since 2015… Either Intel is crazy cheap after these declines, or investors who are bargain hunting in INTC are just plain crazy.

If you’re interested in the case for Intel, as aggressive as it may be, one strategy in particular is worth reviewing: The so-called “Dogs of the Dow” approach, where the highest yielding stocks in the storied Dow Jones Industrial Average are the ones with the biggest upside in the year ahead.

And with a yield of 5.0% at present after its fall from grace, Intel may be a dog that is about to have its day.

Every Dog Has Its Day

It’s hard to even imagine what the market environment was like at the end of 2021, back before the Russian invasion of Ukraine and volatility sparked by rampant inflation and rising interest rates. But let’s take a trip down memory lane for a minute and review where we were in Q4 of last year. 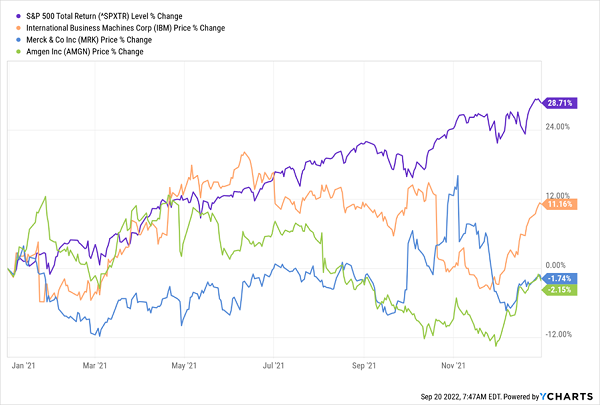 But not all companies in this index logged a great year. Within the Dow, some of the worst-performing stocks were IBM (IBM), Amgen (AMGN) and Merck (MRK). The latter two actually finished 2021 in the red, and if not for a late charge in December, IBM would have been in the same boat.

In the risk-off environment of 2022, however, the story has been quite different. Because this year, all three of those laggards have outperformed the market significantly. 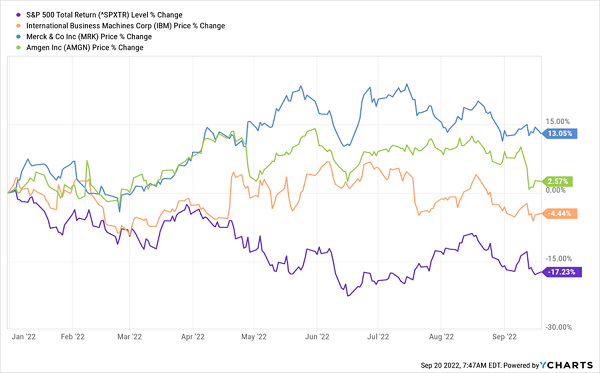 What’s more they offer generous dividends on top of that as I write:

This may seem like cherry picking. And I’ll admit, there are often exceptions to this phenomenon of last year’s losers going on a tear. But the strategy of investing in last year’s lagging but high-dividend Dow components has been around for many years now – with the term “dogs of the Dow” popularized way back in 1991 by Michael B. O’Higgins in his book, “Beating the Dow.”

Knowing that, let me make the case for why poor performer Intel may be a dog that’s about to have its day in 2023.

The Case for Intel

Let’s admit a few things up front: Supply chains continue to be a mess for Intel, its branded chips are seeing lagging demand as competitors sharpen their knives and the stock’s fundamentals are ugly with its recent earnings miss and lowered guidance this summer.

But here’s the thing: Even with gutted forecasts that now predict a mere $2.30 in earnings per share this year instead of $3.60, the dividend of $1.46 annually is not just safe but a near sure thing. And at a current yield of 5.0%, with a long history of dividend growth, this income stream is pretty darn attractive right now. 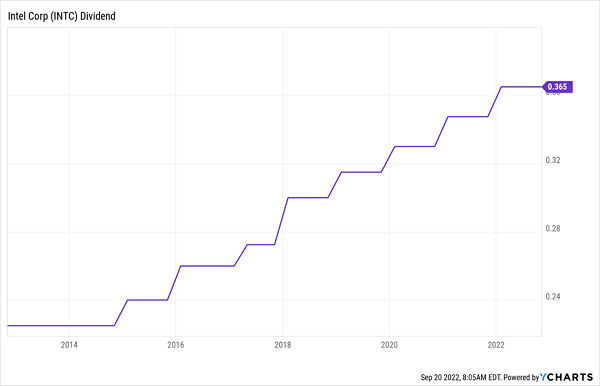 Furthermore, Intel’s CEO told Wall Street things are turning around, saying “We do think we’re on the bottom.” The exec also didn’t mince words and owned up to internal “execution” instead of just blaming the economic environment. That’s clearly a wake-up call to staff, and a sign that excuses aren’t acceptable.

Finally, a lot of the negativity around Intel is misplaced as investors have been sweating the decline in free cash flow without looking at where that money is going. INTC has teamed up with Brookfield Infrastructure Partners (BIP) to construct $30 billion in new chip fabrication facilities here in the U.S., and is committing $100 billion globally on new facilities. In an era of chronic supply shortages as well as a focus on “strategic autonomy” with bringing chips onshore to reduce reliance on America’s trade partners like China, these investments will almost certainly pay off.

There are many reasons a “dogs of the Dow” approach works, and each stock’s story is unique. But generally speaking, the strategy encourages investors to stake out a position in a high-yield stock that is well established but has just fallen on hard times to lag the market lately – because if you’re patient, these stocks almost always turn around.

That sounds just like what’s happening at Intel. So investors willing to look past current challenges and bank on the future could be richly rewarded with both outperformance in shares as well as a 5% dividend yield that will grow alongside earnings.

Bank on Dividend Megatrends in 2023 … and Beyond!

It’s crucial to do individual analysis of stocks to ensure you have the right investments in your portfolio. But it’s also important to identify big picture trends that provide significant tailwinds to increase the likelihood of your success.

The “dogs of the Dow” approach is one such strategy that makes Intel worth considering. Another is the movement towards onshore manufacturing, which my colleague Brett Owens recently wrote about in even greater detail.

… a reliance on the dividend megatrend that is reshaping Wall Street!

With runaway inflation and rising rates, we’ve seen the “risk off” trade come into full force. That means the big small-cap and tech stock winners of yesteryear are just a memory, and rock solid stocks with bulletproof balance sheets are the only way to go.

At Contrarian Outlook, we’re experts in identifying the opportunities in this kind of environment. While day-trading millennials were betting their whole paycheck on bitcoin or GameStop, we were looking for reliable long-term investments that deliver 7%+ yield and 15%+ upside in shares like clockwork.

It was easy for them to laugh at those comparatively smaller returns a year or two ago. But in 2022, who’s laughing now?

The dividend megatrend is here to stay. And you simply cannot invest by following the old rules.

So let us help you reposition your portfolio for success in this new environment with two complimentary special reports – “Hidden Yields: 7 Recession-Proof Dividend Stocks With 100% Upside,” which will tell you what to buy, and “Behind the 8-Ball: Eight Popular Dividends Set for a Cut” that will tell you what to sell.

If you want to boost your portfolio’s growth in a responsible way, with stocks selected with the goal of 15%+ returns and consistent dividend growth to boot, you have to think differently.

Let us show you how – and learn about stocks with even bigger dividends and bigger upside than Intel – in these free reports.