This 6.3% Blue Chip Is Dialed in for Steady Gains Ahead

Wall Street has been giving investors whiplash lately, as the big rebound from July evaporated in August. And as we look to close out the year, more volatility is sure to follow.

Most financial news channels blame the choppy environment on rising interest rates, rampant inflation or other macroeconomic boogeymen. But that’s just because the media needs to keep you clicking on headlines if they want to get paid! The real reason for recent volatility is much simpler.

Spend time around toddlers or pets and you’ll see the perils of first order thinking on display. Hungry? Eat whatever you can find. Scared? Run and hide. Angry? Just lash out.

First order thinking is all about instant gratification or finding immediate solutions to perceived problems. But what may feel like logical actions at first often turn out to be misguided actions when you stop and look around.

That’s because real life is complicated and emotional decisions made quickly often turn out to be the wrong ones… something Wall Street traders need to hear more often!

Successful long-term investing involves looking beyond putting your emotions aside and engaging in deeper analysis. You have to look beyond gut feelings and one-dimensional headlines to see the real opportunities.

Right now, one of my favorite examples of a stock that stands up once you get beyond first-level analysis is telecom Verizon (VZ). Because on the surface this stock is facing some challenges – but when you dig deeper, there’s tremendous potential for investors who are in the know.

Verizon is a Bargain at a 10-Year Low

Let’s begin with the first-order headlines lately that have made up the bearish case for Verizon stock.

The telecom recently missed earnings and lowered its guidance for fiscal 2022. And as a result, shares have been in a death spiral as they’ve given up about 25% from their March highs to bottom out at levels not seen since 2012.

Ouch on both counts! If we wanted to, we could just stop there and have a pretty good case for why investors should abandon VZ stock. 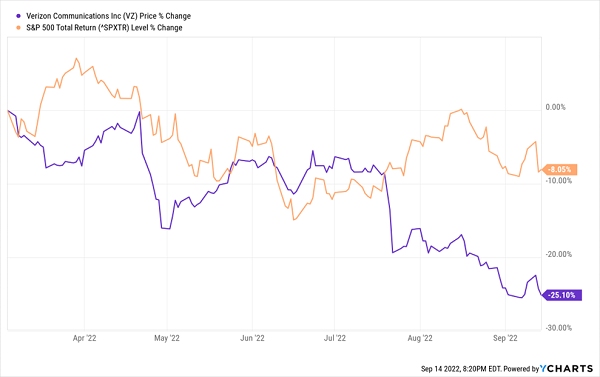 But as I said earlier, the long-term case for Verizon involves getting beyond a knee-jerk reaction to news feeds. Because when you dig deeper into the details, the facts behind this telecom giant start to tell a different story.

On the dividend front, the company yields 6.3% right now. And that’s after just boosting its payout for the 16th consecutive year running in the wake of those theoretically ugly Q2 earnings. 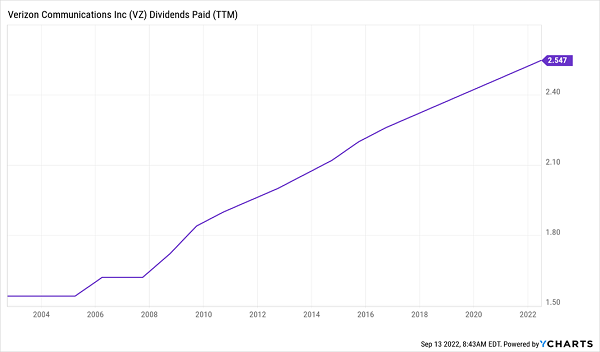 What’s more, even after its lowered guidance the consensus earnings target for Verizon is $5.18 per share this fiscal year – more than 2X its $2.56 in annual dividend payments to shareholders. That means the payouts aren’t just sustainable, but ripe for future increases even if the profits don’t budge.

Beyond payouts, the valuation picture shows that the 10-year low in shares is creating a bargain opportunity for shareholders.  Consider that Verizon stock is currently priced at 1.3 times revenue, when last summer it was trading for roughly 1.8 times revenue. And looking forward, VZ stock is valued at about 8 times next year’s earnings, while last summer it was trading with a forward P/E of about 11 – and just before the pandemic, had a P/E of almost 16. 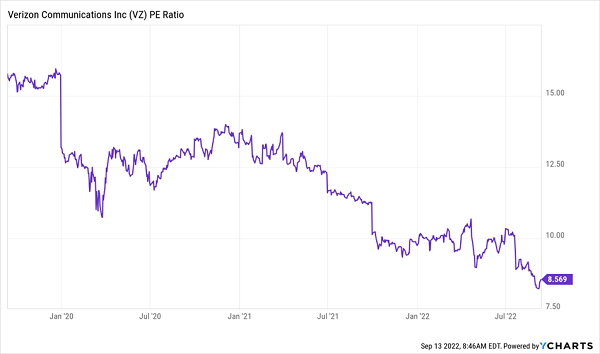 That means for every penny of profit VZ stock generates, the company as a whole is valued at half what it was just under four years ago!

And last but not least, let’s not forget that this is a company with enviable scale and entrenched customers. It is the largest wireless carrier in the U.S., and is valued at nearly $180 billion. The telecom industry is notorious for its “wide moats” preventing new competitors, given the massive expense that new entrants would have to endure just to enter similar services.

Sure, VZ has seen a bit of negativity lately because of its earnings miss. But keep in mind that’s not because it’s falling apart but rather because growth is harder to come by. Specifically, the company netted a mere 12,000 new wireless customers nationwide in Q2.

That’s admittedly not going to take Verizon to new heights, but what do you expect from the leading U.S. wireless company after two decades of dominance – 100% year-over-year growth rates?

As you can see, the short-term negativity over the stock price and recent earnings is obscuring the structural virtues and long-term opportunity in this stock.

Once you can get beyond the raw emotions of first-order thinking, that is.

Look Beyond “First Order” Thinking to Unlock Hidden Yields of 7%+!

Contrarian investing isn’t easy. You have to be skeptical about what you read, and willing to do the necessary work to validate the headlines – both good ones and bad ones alike.

It can make some investors uncomfortable, particularly when the findings are at odds with conventional wisdom.

But then again, if everyone felt the same way… it wouldn’t be contrarian in the first place!

The strange thing about contrarian investing is that it has massive historical support behind it. The iconic Warren Buffett outlined this mindset in his famous adage that he likes to be greedy when others are fearful, and fearful when others are greedy.

Another lion of the investing world, Benjamin Graham, said that intelligent investors should experience the utmost satisfaction when “his operations are exactly opposite to those of the crowd.”

More than a century before that, a member of the famous Rothschild banking family said that the time to buy is not when things are great, but rather when there is “blood in the streets.”

Of course, these quotes of support for the notion of contrarian investing are easy to agree with in a vacuum. It’s much harder to wake up and see red all over Wall Street and decide that’s the day you’re going to buy.

But that’s where we come in. At Contrarian Outlook, we offer in-depth analysis and trusted research that can help you easily cut through the noise elsewhere in financial media. We also provide regular updates and educational resources to help you understand the right moves to make – and why.

Our track record speaks for itself. Consider that while most of the usual suspects are getting whipsawed in 2022, an elite group of crash-resistant stocks has been powering our portfolios to new heights… and without aggressively taking risks to do so!

That may not seem possible to some investors who refuse to look beyond the surface. They think their only options are to lock in the losses of index funds, or to gamble away their cash on small-cap tech stocks and bitcoin.

However, our “Hidden Yield stocks” speak for themselves. They are stable companies with staying power and big yield … but uniquely value propositions thanks to their under-the-radar nature that means they can deliver 50%, 70% or even 100% upside in the years ahead!

Just take one look at our portfolio and you’ll see why. These are stocks with a strong history of growing dividends and share repurchases, but investments that have been overlooked and thus offer tremendous value right now.

What’s more, these stocks as a group pay an even BIGGER yield than Verizon!

Click here for a risk-free look at our 7 Recession-Resistant Dividend Stocks With 100% Upside, and let us show you how to find even more high-yield hidden gems!