“Awful,” I admitted. “But we’re a startup. If we can improve from awful to simply bad, it will be a big milestone for us.”

That was one economic meltdown ago, back in 2008. I had just left my “day job” to start my first company. On cue, the Great Recession descended upon us.

But the gloomy economic backdrop didn’t matter. Actually, it was a blessing. A recession is actually the best time to start companies and grow them.

As a startup with no money, we were able to cobble our limited resources together to get the company off the ground. Our pennies, nickels and hustle procured more in return than they would have in a hot economy. The Great Recession—devastating for some businesses—was a launching pad for an opportunistic, aggressive company like ours.

Thirteen years later, the software firm is serving a continually growing base of customers. (Without your income strategist these days. I sold my founding stake years ago to focus on finding dividends for us like-minded contrarians!)

In early 2009, Inc Magazine featured our fundraising story. Or lack thereof—it prominently involved my credit cards! I keep a framed copy on my wall, right next to my professionally commissioned artwork, to remind me about the importance of recession “grit” and the value of being aggressive when competitors are hunkering down. 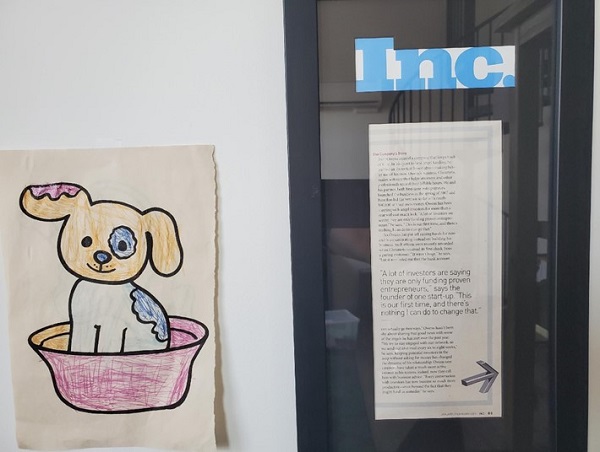 I don’t have to lecture one 8.2% yielder about grit. Throughout 2020, when most of their competitors were quietly shrinking away from deals, this “power lender” stepped up to the plate and gained market share.

“We believe that many of our competitors were not open for business during the pandemic, and market participants took notice that we were very active throughout this period.”

Kipp’s team at Ares Capital (ARCC) took market share. ARCC is a business development company (BDC). It was already the biggest BDC on the block. I’ve made the case before that ARCC is also the baddest (in that bad is good way) after displaying the audacity to be open in a year when its competitors were essentially closed.

ARCC is a “rich guy favorite” because it pays a lot, and it bullies around its competition.

That said, it’s not the only BDC that pays a lot. Are the others worth considering?

Let’s take a look at a few potential gems in this space: a blend of three small-biz portfolios yielding between 8.7% and 10.7%.

Let’s start with Golub Capital (GBDC), which provides a number of financing solutions, largely debt and minority equity investments, primarily to companies that are backed by private equity sponsors.

The vast majority of its loans are first lien: 84% “one-stop” loans, and another 10% traditional senior debt. Another 5% are equity, with a 1% splash of junior debt. And of that debt, 100% is floating-rate, helping it leverage the current rising-rate environment to its advantage.

GBDC is a well-diversified BDC, too, spanning dozens of industries, though it’s fatter in some than others. Software is the biggest chunk at 24%, but every other industry—including healthcare providers, specialty retail and insurance—is in single digits. 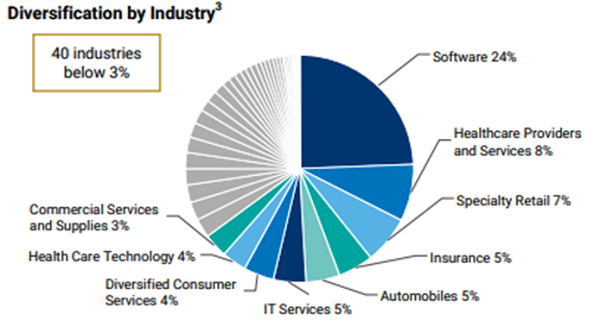 Golub Capital BDC’s most recent quarter was strong yet again—earnings were up and better than expected, credit quality remained strong, and while book value declined, it did so less than analysts expected.

Importantly, investors continue to undervalue GBDC. The stock has dropped by 12% this year—lower than the BDC average—but it now trades for just 90% of net asset value. That’s compelling, as is a nearly 9% yield at current prices.

The big question I have: When will its potential finally turn into outperformance?

GBDC Has Put Up Middling Returns for Years 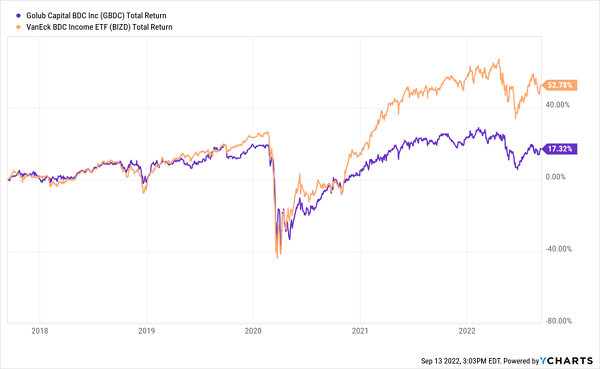 TriplePoint Venture Growth BDC (TPVG) is similar to Golub, but “younger.” That is, rather than investing in PE-backed companies, it invests in venture capital-backed companies in the venture growth stage. It does so via primarily secured, growth capital loans.

And, as the name would suggest, its portfolio is primarily focused on technology, life sciences and other high-growth industries. Indeed, its current portfolio includes some relatively well-known names among startups, including electric toothbrush maker Quip, fintech firm Revolut and shirt maker Untuckit.

This focus on growth has for years served TPVG well, resulting in clear outperformance versus the broader BDC industry.

TriplePoint Is on Point 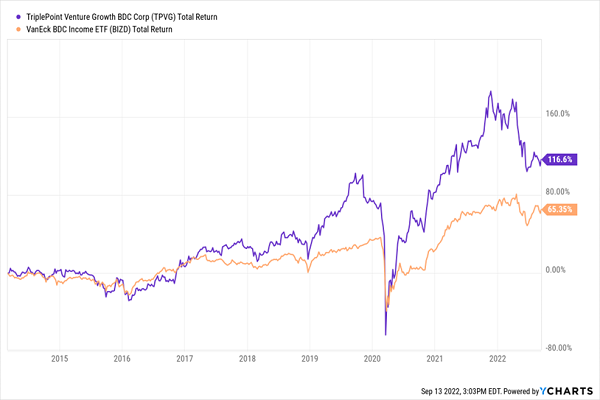 And yet, several things about TriplePoint Venture Growth make me hesitant, at least at this moment in time.

For one, TPVG isn’t nearly as well-positioned to capitalize on higher interest rates; less than 60% of its loans are currently floating-rate.

It’s also not nearly the value play that GBDC is. TriplePoint’s most recent investor presentation showed that the company has been trading at a premium to its peers for the past couple of years, on a price-to-book basis. Currently, its price/NAV is up to 1.02—fairly valued at best. 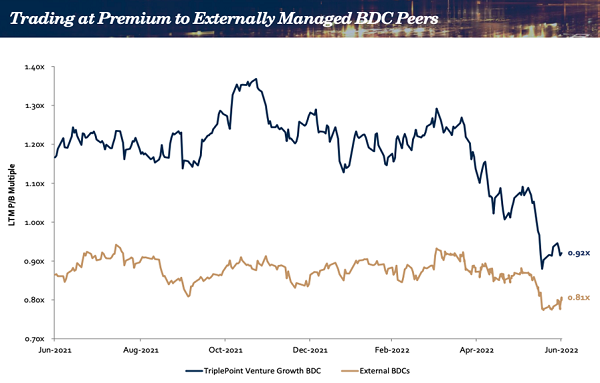 Credit quality is also an issue here. Last quarter, one of its investments, Pencil and Pixel, was placed on non-accrual and significantly written down. That raised its non-accruals to 5.1% of the portfolio at cost.

TPVG might be worth considering at a better valuation, but it’s difficult to justify in this interest-rate environment at current prices.

PFLT deals primarily in first lien senior secured debt (87%), with another 13% in preferred and common equity. And as the name suggests, every last cent of that debt portfolio is floating-rate in nature—something I suggested would serve PFLT well in 2022. (And it has!) 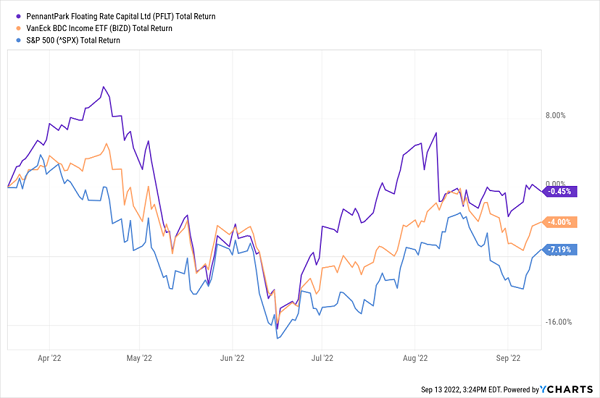 As I said back in March:

“A more aggressive PennantPark and a friendlier interest-rate environment have analysts far more optimistic about PFLT’s ability to keep writing its dividend checks. That makes it a far safer play—at least as long as the hawks are in charge at the Fed.”

I also mentioned that PFLT had upped its investment in a joint venture with a Kemper (KMPR) subsidiary—that and rising rates have helped to improve its portfolio yield.

Credit quality is also heading in the right direction thanks to a loan to Marketplace Events getting put back onto accrual status, driving its non-accrual rate down to just 0.9%.

A high 9.3% yield on its dividend—paid monthly, no less—sweetens the pot. It does trade roughly at NAV, though, so it could stand to be a little cheaper.

While PFLT might not be ripe for the buying, that’s OK. The recent downturn has nudged some of the market’s best high-yield dividend names back into “BUY NOW!” territory.

My “Perfect Income” portfolio features some of the most generous, yet stable, dividend investments I’ve found. The only problem: In normal market conditions, they tend to trade at lofty valuations thanks to their clear performance potential. But every now and again, when the market throws a fit, Wall Street throws the baby out with the bathwater and gives us a chance to buy even more on the cheap.