This “Billionaire’s Favorite” (Legally) Snubs the IRS and Yields 5.1%

If you’re like many folks, you might be looking at your stock gains this year and dreading the tax bill headed your way in 2020.

That makes now a great time to consider the only (tax-) free lunch in investing: municipal bonds. I’ll name one play on these retirement-changing investments in a moment. This unusual fund yields an outsized 5.1% today and sets us up for a “steady as she goes” triple-digit gain, too.

First, let’s talk a little more about the tax side of “muni” bonds: these investments pay a 100% tax-free dividend (so their “real” yields could be much higher for you, depending on your tax bracket).

This underestimated benefit is written right into the tax code as an incentive to get investors to pile cash into hospitals, bridges, and other badly needed infrastructure. So a selection of munis can be a boon to your retirement, amping up your income and adding much-needed ballast to your nest egg in a market storm.

Here’s a little-known fact about munis: when towns, cities and states issue them, they call a select group of customers first—and these lucky buyers get first crack at the best bonds, leaving everyone else out in the cold.

And no, those priority customers aren’t regular folks like you and me. They’re titans like PIMCO and BlackRock, who invest trillions in muni bonds. But this doesn’t mean muni bonds are an elite money-maker we’re shut out of. Far from it!

Because if we can’t beat the big guys, we’re going to join them … by buying their funds.

We’re not going to buy a muni-bond index fund like the iShares National Municipal Bond ETF (MUB), though. Because doing so is almost guaranteed to hand us inferior returns.

Instead, we’re going to get our muni fix through a special kind of fund called a closed-end fund (CEF). This automatically sets us up to outperform the passive crowd: 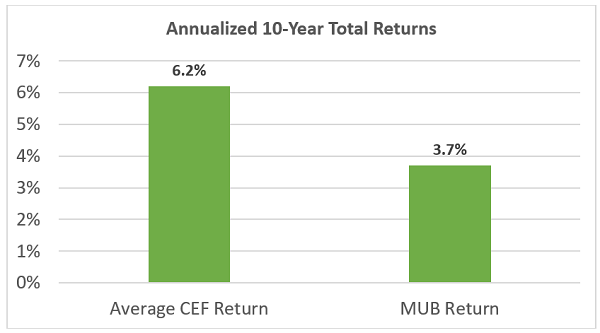 As you can see, MUB gave investors just a 3.7% annualized return over the last decade, while actively managed muni-bond CEFs delivered a much bigger 6.2%. In fact, only two of 138 muni-bond CEFs that have been around for a decade or more have underperformed MUB over that time period.

Why? Because these funds are managed by BlackRock, PIMCO and other bond giants—companies that get preferential treatment when new munis come on the scene.

It isn’t just total returns that are bigger. MUB’s 2.3% dividend yield is better than you’d get from stocks, but it’s much less than the average 4.1% yield across muni-bond CEFs. And with yields as high as 5.1%, income from muni-bond CEFs can get pretty lofty, especially when you consider that a 5.1% muni dividend is the same as an 8.4% yield if you’re in the highest tax bracket.

By the way, that 5.1% yield is from the Nuveen Municipal High Income Opportunity Fund (NMZ), which also happens to be one of the top performers over the long haul.

The Index Doesn’t Stand a Chance 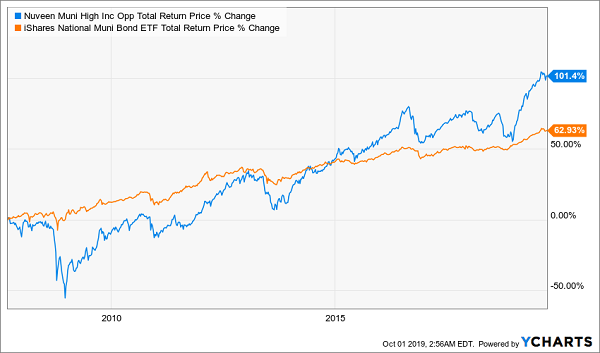 With MUB well behind NMZ and yielding less, what’s the point of even considering the index fund? Furthermore, NMZ recently raised its dividend, and more dividend increases are likely to come as the Federal Reserve cuts interest rates.

Why? Because more investors are going to be looking for yield, and as the crowd comes to muni bonds, profits from muni-bond funds will grow. Hence NMZ’s monster 2019: 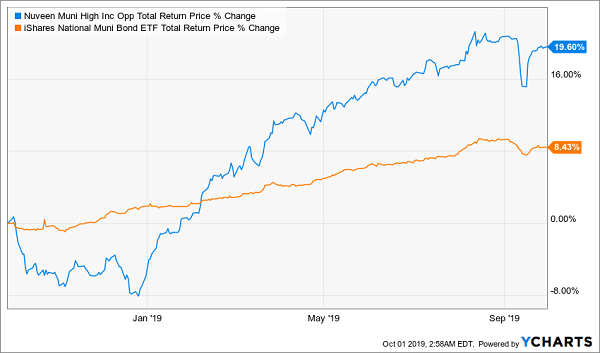 After a near 20% return in less than a year from a low-volatility investment, you might be wondering if it’s too late to get into muni bonds. But if we zoom out a bit, we can clearly see that this isn’t the case. 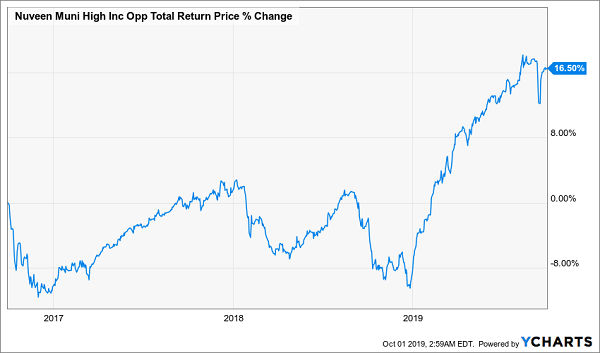 Over the last three years, NMZ has earned an annualized 5.2%, which is far below its 10-year average annual return of 7.9%. In other words, NMZ’s real profit potential isn’t yet priced in.

That’s because investors have ignored NMZ for a long time, due to the Federal Reserve.

From 2015 to late 2018, the Fed entered a period of rising interest rates, which scared muni-bond investors. The idea was that higher Treasury yields would entice investors away from munis and into Treasuries.

Furthermore, there were rumors during the 2016 election that the tax-free status munis have enjoyed for decades would be scrapped. That obviously never happened, but the resulting muni selloff resulted in a heavily discounted asset class that has taken years to recover. And now that the Fed is cutting rates, the biggest bear case for munis is gone, causing that recovery to intensify.

That rebound still isn’t over, which is why you can jump into a tax-free yielder like NMZ and expect capital gains as the market realizes just how wonderful these funds’ tax-free income can be.

These 8.8% Dividends Fit Perfectly With NMZ

NMZ is just the start: I want to give you four more funds that hand you even more dividend income—I’m talking a blockbuster 8.8% average yield.

Plus, these funds are so cheap now, they’re “spring-loaded” for 20%+ price upside in the next year.

So if, say, you invested $200K in this diversified collection of income powerhouses now, you’d be looking at a cool $17,600 in dividend cash by this time next year—and $40,000 in price upside too!

But these 4 income powerhouses won’t be cheap for long—especially with the Fed determined to keep cutting interest rates, which will drive more income-starved investors into the CEF market.

The time to buy is now! I’ve got the full story on all 4 of these funds for you when you click right here: names, tickers, buy-under prices and everything else you need to know before you buy. Don’t miss out!