This Popular Retirement Advice Will Leave You 76.2% Broke

How much money do you need to retire on dividends alone?

This is a better question to ask than the typical “magic number” formula that most “first-level” thinking firms tout. Let’s review why their approach is fatally flawed, so that we can derive a more reliable method of our own based in actual reality (and funded by actual dividend payments.)

You should aim to have 10 times your final salary in savings.

But why? I suppose they are claiming that, if you earned $100,000 in your final year working, that you’ll want to earn this much in income every year for the rest of your life.

So, Fidelity says save a million bucks and you’re in good shape.

Fidelity’s Strategic Dividend & Income Fund (FSDIX) pays 2.38% today. Which means, if you follow their advice to a tee, and buy their flagship income fund, you are earning $23,800 per year in income from your million-dollar stake.

That’s a start. But where exactly is the other 76.2% of you income supposed to come from?

Apparently this is up to us to figure out, because we’ve run out of sage advice from this respected investment firm. So let’s see if we can piece together a full retirement ourselves.

Shall We Also Withdraw 4% Annually?

We saved a million like they said, and we’re earning less than our neighborhood coffee barista. I presume we’re now supposed to sell shares to make up the difference. Most mainstream-following financial advisors say that we can sell 4% of our portfolio annually for income, so let’s try this.

FSDIX has returned 7.54% annually since inception, so a 4% yearly drawdown appears sustainable. However, we see three glaring pitfalls.

So what exactly was the point of buying a dividend fund when we were going to have to sell shares anyway? And see them appreciate less than a dumber, cheaper index fund?

More concerning than mere mediocrity, however, is the threat of “reverse dollar cost averaging.” Peak to trough in 2008, FSDIX lost 59% of its value. If you’re selling stock for income, you’re selling more and more at lower and lower levels:

You Don’t Want to Be Selling Here 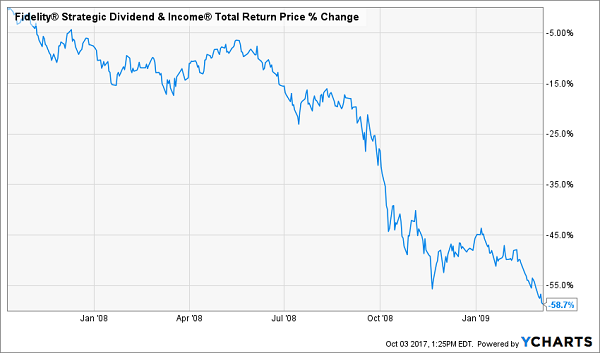 Buy who actually buys and holds? In reality, there are two types of investors:

Back to Even (But Most Did Much Better, or Much Worse) 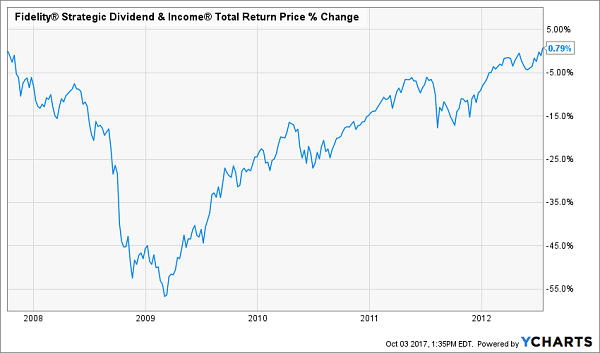 Dollar cost averaging is a powerful force. Make sure it’s working for you, rather than against you. Here’s how.

Fade the 4% Fallacy for a Smarter “Magic Dividend Number”

Our retirement approach is grounded in reality versus fantasy and false math. So, let’s begin with the value of your actual portfolio.

Back to the $1 million example. Let’s say we saved that money like Fidelity said to, and we still want $100,000 per year.

We’ll ditch the flawed notion of selling capital for income, and live on dividends alone. This means our portfolio’s “magic yield” is 10% annually.

But today, there’s only one safe 10% yield left on the board. And I wouldn’t recommend putting your entire portfolio in only one issue, no matter how sound its payout seems.

So, we’re faced with a decision. We can:

While I wouldn’t recommend an entire portfolio of double-digit payers, I do like seven stocks (and funds) yielding an average of 8.3% today.

Their dividends are safe, and believe it or not, their prices are a bit undervalued to boot. This means we should enjoy price upside as well, and achieve 10%+ annual returns on these dividend machines.

Let’s talk more about these income plays, because you should be tuning out the “first-level” pundits – those who do little or no original thinking – and replacing your underperforming payers with these meaningful (and safe) 8.3% yields.

For example, retailer Macy’s (M) pays 7.2% on paper. But its business model is toast. Next quarter’s payment may happen, but that’s a risky game I’m not willing to play.

Their relative obscurity is great news for us 8.3% dividend seekers.

Now let’s discuss how you can get a hold of my complete “8.3% No Withdrawal Portfolio” research today, along with stock names, tickers and buy prices. Click here and I’ll share the specifics – and all of my research – with you right now.