This Unloved CEF Is Built for a Crisis (and pays 7.1%)

Today we’re going to cut through the economic hype surrounding this crisis and jump on a little-noticed opportunity for double-digit upside and 7% dividends, too.

I’ll get into the raw numbers, and some specific tickers, shortly.

First, here’s a figure you may have read in the news: US households lost $6 trillion in the first quarter of 2020. That’s tough to get your head around: it equates to $57,551 per household.

Taken on its own, you might think it means we’re in for a long, dreary recovery. But there are a few facts we need to complete the picture.

The first: Americans didn’t go that deeply in debt to offset that loss. In fact, we saw consumer credit fall by $30 billion in the first quarter of 2020. Overall, total debt rose less than 1%, far less than it’s been rising for years.

This is partly to be expected. With a nationwide lockdown, there was a lot less to spend money on. But even so, this lack of debt growth is good news. And it’s not the only good news in this story.

You see, most of the decline in household assets resulted from the stock-market crash, which began in late February and resulted in a 23.5% drop in the S&P 500. That meant $7.8 trillion in total equity value disappeared.

But most of that loss has already returned. 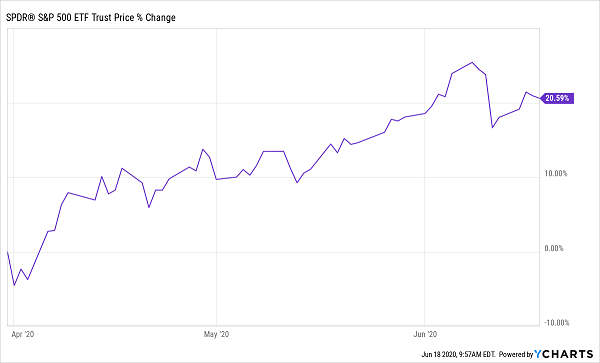 Since the end of March, stocks have seen a 20% increase in the S&P 500, which would imply a roughly $6 trillion gain in household net worth.

This is the best part of the story: American households are seeing their net worth bounce back, just as many of them are emerging from lockdown. And this is what sets us up for the unique investment opportunity we have before us now.

The “Wealth Effect” and Your Dividends

One of the important economic impacts of stock-market movements is the “wealth effect.” It simply means that the higher stocks rise, the wealthier people feel and the more willing they are to make discretionary purchases. So, with stocks back near their pre-pandemic price levels, household portfolios are encouraging people to spend. Couple that with the psychological effects of the lockdown ending and you have the ingredients for a strong recovery in American GDP.

That’s all good news, but how do we play it? Let’s get into that now.

You Could Buy These Individual Stocks …

There are two sectors most worth buying now: tech and consumer-discretionary stocks.

Let’s start with consumer discretionary. These are companies whose goods consumers choose to buy when they feel more comfortable spending money they don’t have to spend. That’s a sharp contrast to consumer-staples firms, which sell things people need no matter what.

What specific companies are we talking about? The largest ones in this sector are Amazon.com (AMZN) and Home Depot (HD), both of which are up big in 2020. But there are also some beaten-down names, like McDonald’s (MCD), Nike (NKE), Starbucks (SBUX) and TJ Maxx (TJX).

These stocks’ weak performance doesn’t make sense now, if we expect Americans to go out and shop after months of being unable to.

Then there’s tech, specifically Microsoft (MSFT), Apple (AAPL), Visa (V) and Mastercard (MA). The latter two are obviously well-positioned to benefit from increased consumer spending, as volumes ramp up on their payment networks, while Microsoft and Apple are poised to profit as the wealth effect drives consumers to buy more gadgets. Some of these profits are priced in, but not all: Mastercard, for example, is up a meager 2.8% year to date, despite the stronger spending we’re likely to see from freed-up consumers.

… But We Want Big Dividends!

Obviously, you could choose which stocks in these sectors to buy, manage a portfolio, keep track of their ups and downs and sell accordingly. But that’s a lot of work, and with many tech and consumer-discretionary firms paying low (or no) dividends, it won’t give you much income.

You’re better off to go with a closed-end fund (CEF) like the Liberty All-Star Growth Fund (ASG). Despite the “growth” in its name, ASG is a solid income play, paying an outsized 7.1% dividend. It gives you plenty of exposure to tech and consumer discretionary, which together account for almost half of its assets. Plus you’re getting a big dose of healthcare at a time when the world is more focused on healthcare than ever. 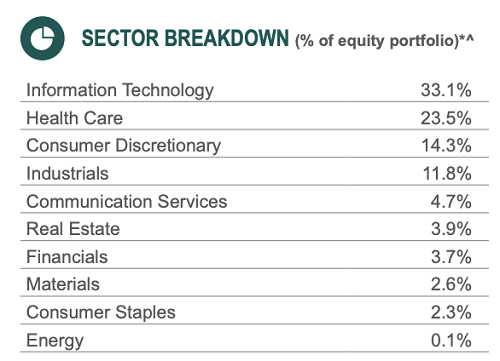 Finally, ASG trades at a 4.5% discount to its net asset value (NAV, or the value of the stocks in its portfolio) and has a history of strong performance: over the last decade, it’s risen 14.7% per year on average, besting the S&P 500.

If you’re interested in CEFs, your timing couldn’t be better, because I’ve just released my 4 top buys among these little-known income plays. These 4 stout funds throw 9.4% average payouts! PLUS they trade at even more attractive discounts than ASG.

Just how cheap are these 4 income titans?

Big enough to ignite 20%+ gains in the next 12 months, even if the market only moves slightly higher from here. And if we do get a decline, these big discounts help keep our 4 funds’ market prices stable.

And we’ll enjoy their massive 9.4% dividends the entire time!

I can’t wait to show you these 4 “crisis-proof” 9.4%-paying CEFs. Everything you need to know about them is waiting for you here: names, tickers, buy-under prices, complete dividend histories—the works!

One thing you can count on? If you pass up this opportunity now, you’ll surely be kicking yourself in 12 months. Don’t miss out on the dividends and upside on offer with these 4 incredible funds. Go right here to get everything you need to know.