Historically speaking, it’s best to avoid bonds when your central bank is printing money like crazy. More cash can lead to inflation, which can lead to higher interest rates—and put a damper on any fixed-rate holdings.

But not all bonds are bad ideas. Some have their coupons tick higher with rates. Others can even provide you with the upside of a stock! Let’s review US-centric fixed income, starting with the “outhouse” and working our way up to the “penthouse” quality bonds paying as much as 8% today.

Ten-year Treasuries pay just 0.5% or so as I write. Put a million bucks into them, and you’ve got a whopping $5,000 or so in “poverty-level” income. A sad return.

Sure, you can enjoy a bit of upside if rates keep moving lower. But that is a tough way to make a living, let alone a retirement.

The best time to buy US Treasuries was in the early 1980s, when interest rates were peaking, and your high fixed rate was destined to look good down the road:

The Time and Place to Buy Treasuries 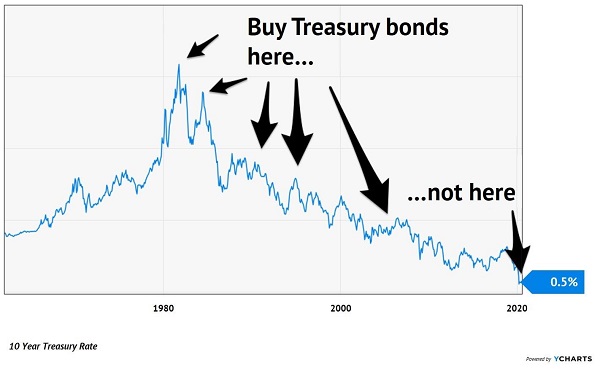 Just as there is a time and place to buy US Treasuries, the same goes for floating-rate bonds. These investments sport the nifty quality that their own yields tick higher as rates rise.

The problem buying them today? Rates aren’t rising yet. And until they take off, we’re just as well-off stuffing cash under our mattresses as we are buying floaters.

Let’s look at the most popular ETF in the space, the iShares Floating Rate Bond ETF (FLOT). It pays just 0.8% today. And the mediocrity doesn’t stop there, because the fund has delivered total returns of just 13% over the last nine years.

Plus, investors were delivered one case of serious heart palpitations earlier this year when FLOT buyers vanished:

Barely Better Than Your Mattress 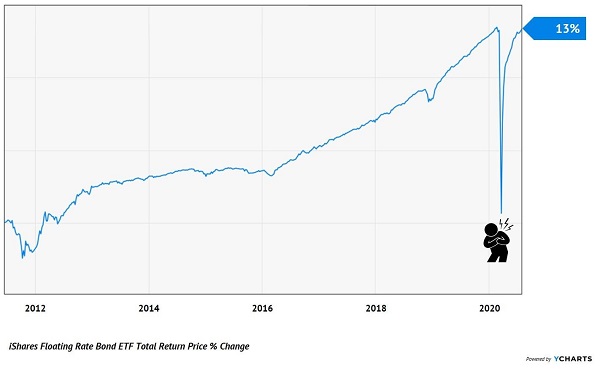 Floating rate CEFs are a better bet, but again, we want to hold them when rates are rising (or, just before they take off).

A CEF such as the Eaton Vance Floating Rate Income Fund (EFT) is a better bet. First, the fund pays 5.9%, a livable dividend wage. Second, EFT can keep your income (and NAV) protected as rates rise.

Now EFT does OK when “rangebound.” You can see its purple “total return” below versus the 10-year Treasury yield in orange. EFT returned 60% over the eight-year period beginning in 2012 and ending at the start of this year: 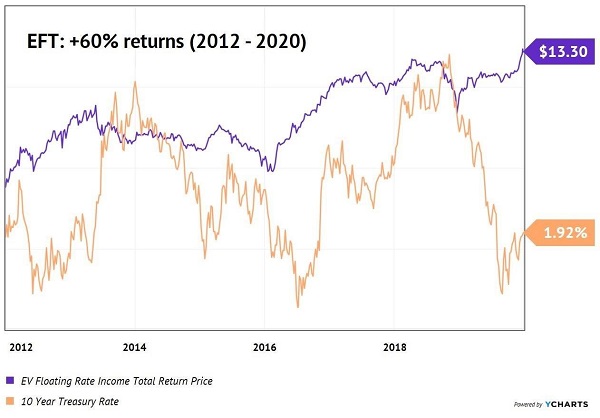 Still, it’s a bit early on EFT. We’d rather own it as rates rise, and on that note, I’ll keep you posted.

Treasuries are safe and boring, with basement yields and limited upside, and it’s too early for floaters. So where to turn for more yield and upside? Municipal bonds.

Municipal, or “muni” bonds, collect income from the funding of projects like toll roads in Denver and a convention center renovation in Chicago. Despite headline fears you may have read about muni defaults through the years (in Puerto Rico, for example), they’re actually the safest bonds you can buy other than U.S. Treasuries. Default rates are quite low—an infinitesimal 0.1% to 0.2%!

A good muni fund will return its current yield. For an ETF like the popular iShares National Muni Bond ETF (MUB) that means just 1.2% today.

We contrarians prefer to buy our munis via CEFs (closed-end funds). A CEF like the Nuveen AMT-Free Muni Credit Fund (NVG) is a better long-term way to play munis. And it’s no surprise, because Nuveen is the godfather of the muni CEF sector. Portfolio manager Paul Brennan gets the early phone call on many of the best deals.

NVG yields 5% today, but remember, that’s federal tax-exempt dough.  If you’re a joint filer in the top tax bracket, this is a tax-equivalent yield of 8.4%. Nice.

Of course, you’ll want to watch your muni holdings if rates do indeed rise. For now, the best CEFs are a fine way to stash cash.

Fed Chair Jay Powell knows where the yield is at. When Jay prints new bills, he puts them into corporate bond funds like the iShares High Yield Corporate Bond ETF (HYG). The fund pays 4.9% today, and Jay knows he doesn’t have to worry about credit risk because he can simply backstop any troubled bonds himself (with more newly printed greenbacks, of course!)

Since its 2007 inception, HYG has roughly “returned its yield” with annual returns of 5% per year. Not bad, not great, but good enough to almost double an initial $10K:

I do feel for our poor HYG investor above, who must deal with serious heart palpitations every five to seven years. Bond buyers don’t think they’re signing up for this when they grab a “safe bond yield.” However, with the Fed as HYG’s new friend, the 5% should have less drama going forward.

Look past the common stock and you’ll see the preferreds. Corporations issue them periodically to raise cash. These issues generally pay dividends that receive priority over those paid on common shares (a nice benefit during brittle economic times like these).

The dividends on preferreds are usually higher than on their common cousins, too. In this “zero interest rate” world, that’s a pretty sweet quality.

In May, my Contrarian Income Report subscribers received a 5.2% payout increase from our Flaherty & Crumrine Dynamic Preferred & Income Fund (DFP) (to $0.15 per share per month). Our June and July payments were “merely static” but, fear not, we have just received another raise from DFP. 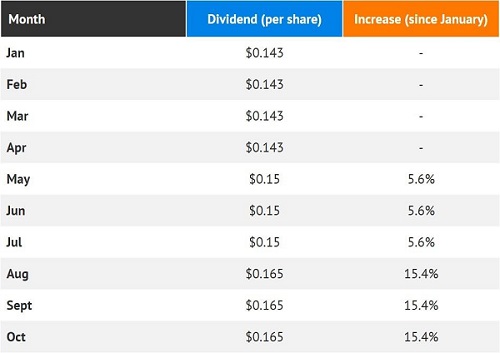 The folks at Flaherty & Crumrine have also declared higher monthly payouts for September and October. I would anticipate DFP will continue to pay the higher rate for the foreseeable future (barring another raise, of course!) which equates to a sweet 7.5% forward yield.

Convertible bonds, like preferred shares, pay regular interest. In this way, they act like bonds. You buy them and “lock in” regular coupon payments.

But convertibles are also like stock options in that they can be “converted” from a bond to a share of stock by the holder. So, you can think of them as bonds with some stock-like upside.

The SPDR Barclays Capital Convertible Bond ETF (CWB) is the most popular mainstream (read: widely marketed) vehicle to purchase convertibles. It pays just 1.3% today. A better idea is the Ellsworth Growth and Income (ECF), which pays 4.4% and trades at a 9% discount to its NAV (while its ETF cousin CWB trades at par).

Are you seeing a recurring theme in bond-land? For every ETF that many investors know quite well, there is a corresponding CEF that they should be buying instead!

Dream Retirement Investments Yielding Up to 15% Per Year

Lots of people say they are contrarians, but few actually meet the definition. Heck, most income investors don’t even know about the gamut of bonds we just discussed, let alone when to buy (and avoid) them!

Income contrarians like us buy the handful of investments that are being completely misunderstood, ignored, and shunned by almost everyone. I’m talking about safe stocks and bond funds that have big yields and secure dividends streams.

And based on the money printing I mentioned earlier, I see two major areas of opportunity for us right now.

The first area is “monthly dividend funds” that pay up to 15% per year, with dividends flowing to you every single month. These “dream retirement” investments will turn that million I mentioned earlier into $80,000, $100,000 or even $150,000 per year—much better than the $6K from Treasuries! Click here and I’ll share my favorite contrarian income investments with you, including names, tickers and buy prices.