With the epic “relief rally” finally on fumes, it’s time to consider jettisoning any dividends that (let’s be honest) should have been sold in February. Stock prices are quite disconnected from their underlying fundamentals, and the four firms we’re going to discuss today have particularly poor prospects.

Sure, these yields appear generous. But these days, we can lose this much in a few bad trading sessions.

(Low payout ratios—the percentage of cash flow being paid as dividends—are usually preferable. A negative ratio is not! More on this wreck shortly.)

As you know, I don’t provide personal financial advice. That said, if I owned any of these shares, I’d sell ’em! Let’s start with a bank whose dividend is at the whim of far too many forces that are beyond its control right now…

Publisher’s note (updated July 14, 2020): As this article was being uploaded to our site on June 30, Wells Fargo did what we expected it to do – just a bit early! – and announced a dividend cut. At that time, we wrote that we would update this article when we had further information, including the amount of the new payout. The bank has now released its second-quarter results and says it will pay $0.10 a share quarterly, down sharply from $0.51. The new annual rate of $0.40 a year yields 1.65%.

Wells Fargo (WFC), like the other big banks, suspended share buybacks in response to COVID-19, which helped protect its payout. And its dividend looks sustainable, at 56% of its last 12 months of free cash flow (FCF) and 67% of earnings.

The real risk here is political, with lawmakers pressing banks to cut dividends while COVID-19 ravages Main Street businesses. And Wells, given its fake-accounts scandal, is especially susceptible to that pressure. (Consider also that Wells recently reached a $3-billion settlement over this scandal, nearly as much as the $4 billion it set aside to cover expected bad loans due to the coronavirus in Q1.)

The bank could also be forced to cut its payout due to the Federal Reserve’s new restrictions on bank dividends. Last week, the Fed ruled out payout hikes for all the major banks, saying they can’t pay out more in dividends in the third quarter than they earned, on average, in the last four quarters.

Wells meets that benchmark now, with $3.6 billion, on average, in net income over the last four quarters. That’s much more than the $2.1 billion in dividends it paid out in the first quarter. But most of those profits came in before the coronavirus; the first quarter, when the virus started to hit the economy, was much more dire: the bank’s $653 million in net income was well short of its dividend payouts.

Dividend worries are why Wells has fallen much further than JPMorgan Chase (JPM), Bank of America (BAC) and Citigroup (C) this year. 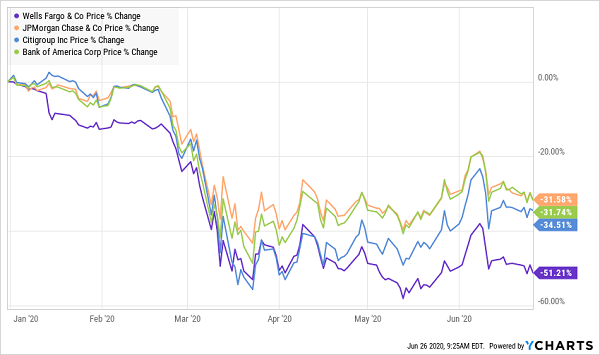 That drop has inflated Wells Fargo’s yield to 7.8%, the highest among the major banks. Don’t take the bait, especially when there are plenty of much safer 7%+ dividends out there.

Dangerous Dividend No. 2: A 7.4%-Payer Facing an Unprecedented Shift

A caveat: those dreadful numbers are likely a one-off because (as I’m sure you’re well aware) the tax deadline shifted from April 15 to July 15 due to the pandemic. That pushed a lot of business from H&R Block’s last quarter (which ended April 30) to the current one.

But don’t let that mask the other issues with the company.

The main one: H&R Block’s core business (58% of the last 12 months of revenue) still involves an in-person visit to a tax preparer—a far-from-ideal setup in a pandemic. Meanwhile, H&R Block gets just 8% of revenue from tax-filing software, which, of course, doesn’t require an office visit. What’s more, higher unemployment will likely shrink the number of overall tax filers.

To be sure, the company’s 751% FCF payout ratio is skewed by the shift in the tax deadline, but management still faces a big challenge shifting more of the company’s business online. I see no reason to bet our dividend income on their efforts.

Dangerous Dividend No. 3: On the Wrong Side of 2 Big Trends

Vornado Realty Trust (VNO) is mainly concentrated in New York City, where it has 35 office buildings and 70 retail properties in Manhattan. New York is reopening, but you and I both know that we’re looking at many months until Vornado’s retail tenants, like Sephora and Victoria’s Secret, see foot traffic anything like they saw pre-pandemic.

Meantime, management reports that it collected just 53% of rents from its retail tenants in April. Vornado hasn’t reported May numbers, but they’re likely nearly as grim.

And there are some signs the vice is tightening on the payout: Vornado’s payout ratio, as a percentage of per-share funds from operations (FFO, the best measure of REIT cash flow) came in at 77% over the last 12 months. That’s generally fine for a REIT, but if we zero in on just the first quarter, we see that adjusted per-share FFO fell 9% from a year ago, making its payout ratio for the quarter a tight 92%.

With retail tenants suffering and companies re-evaluating their office space as more employees work from home, I expect Vornado’s payout ratio to get tighter still—until the (inevitable) payout cut is announced.

Dangerous Dividend No. 4: Rolling Toward a Payout Cut

Ryder System (R) rents and sells transport trucks, hires out drivers and helps companies better manage their supply chains. It also has 56 million square feet of warehouse space across the US.

But there’s a problem: in the first quarter, COVID-19 put a dent in demand for rentals, used vehicles and Ryder’s fleet-management services. That swung the firm to a loss from continuing operations of $1.38 a share from a profit of $1.11.

Also, as we can see in this breakdown of clients of Ryder’s dedicated transportation solutions business, the company is highly exposed to cyclical parts of the economy, like industrial, metals and retail, adding to its volatility in a crisis like this: 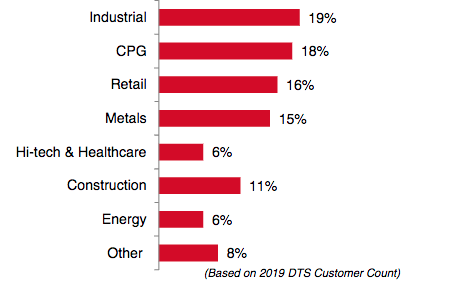 Another issue: Ryder’s FCF payout ratio is now negative—meaning it’s paying a dividend even though it’s generating negative cash flow. That will slam the brakes on payout growth, which had already been slowing in recent years: 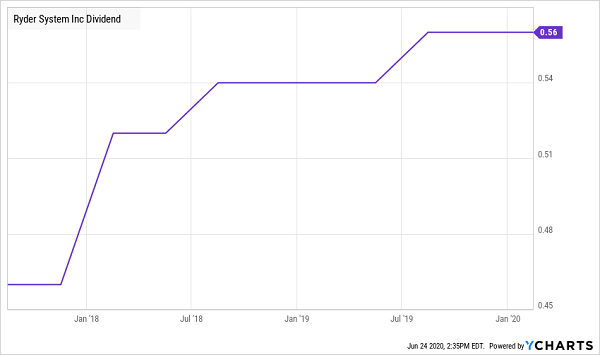 Another concern I have with Ryder is its balance sheet, with long-term debt of $8.2 billion, more than four times the value of all of its outstanding shares. And that debt continues to grow. 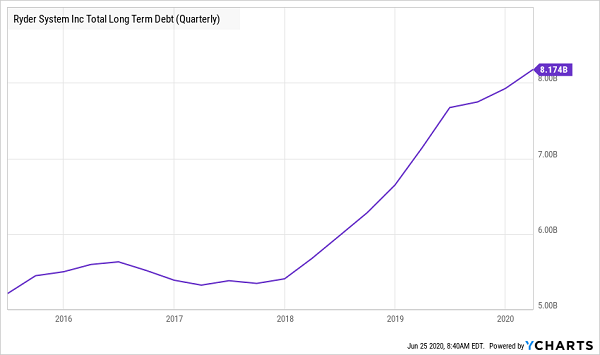 The takeaway? Give Ryder a pass. Its 6.2% payout is running on empty.

I know it’s hard to find high, safe dividends these days, but whatever you do, don’t gamble your retirement on wobbly dividends like the 4 we just discussed above!

Instead, turn your attention to the 5 reliable “recession-resistant” picks I’ll show you right here.

These NEW picks have some of the safest dividends out there right now, and the best part is, you don’t have to sacrifice a single penny in dividend income to get that safety: the lowest yielder of my 5 top picks matches Ryder’s 6.2% yield, and the highest payer yields an incredible 13%!

But that’s where the similarities end: my 5 NEW picks are much less volatile than the 4 wobbly payers above, and their dividends eat up a lot less cash flow. In fact, I fully expect these 5 “ironclad” payouts to not only to hold steady but grow in the months ahead!

The time to act is now, before other investors discover these 5 cash machines and drive their prices away from us.

Don’t miss out. Click here to get full details on each of these 5 NEW “recession-resistant” 6%+ dividend payers now. You’ll get their names, tickers, buy-under prices, complete dividend histories and everything else you need to buy with confidence.