Warning: These 66 “Dead Money” Dividends Could Crush Your Profits

Be careful with conventional “wisdom”—especially when it comes to dividend investing. Some investors are so scared of a payout cut that they chase too-popular yields and watch their money grind sideways for years on end.

This safety trap is especially tempting in 2020, with dividend cuts happening left and right. We’ve had 639 publicly traded US companies reduce or eliminate their payouts in the second quarter alone, according to S&P Dow Jones Indices.

If you’ve been burned by a payout cut this year, the small consolation is you’re far from alone. Many folks were caught off guard when big names like Ford (F), Wells Fargo (WFC) and senior-care REIT Welltower (WELL) slashed or ceased their dividends.

This is where the trap I mentioned earlier comes in. It involves the Dividend Aristocrats, the 66 stocks that have raised their payouts for 25 straight years or more. These companies might also tempt you because many are household names, with 3M (MMM), Johnson & Johnson (JNJ) and Coca-Cola (KO) all making the list.

Moreover, the Aristocrats have been an oasis of dividend calm in this crisis: according to ProShares (whose Aristocrat-focused ETF we’ll discuss in a second), just one Aristocrat cut its dividend in the second quarter.

Case in point: despite the “dividend” in their name, these stocks only pay a shade more than the typical S&P 500 stock.

That’s because NOBL trails the S&P 500 over just about every timeline you can think of, even with dividends included! Let’s start with year to date (with NOBL in orange): 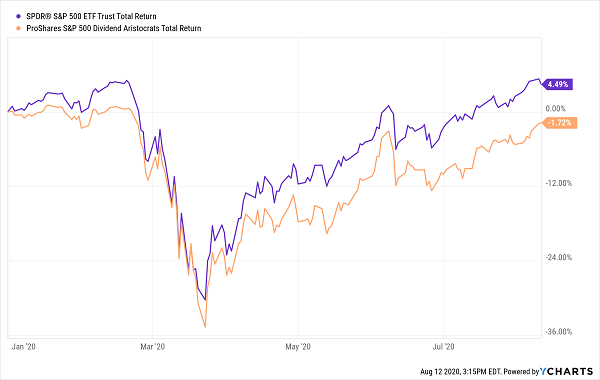 That’s a wide gap. And it gets wider as we lengthen our timespan. Look at the last full year. 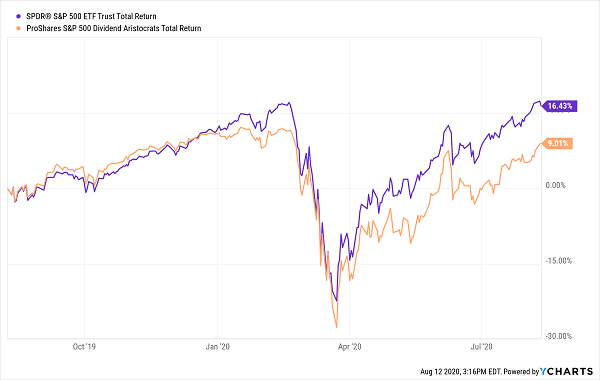 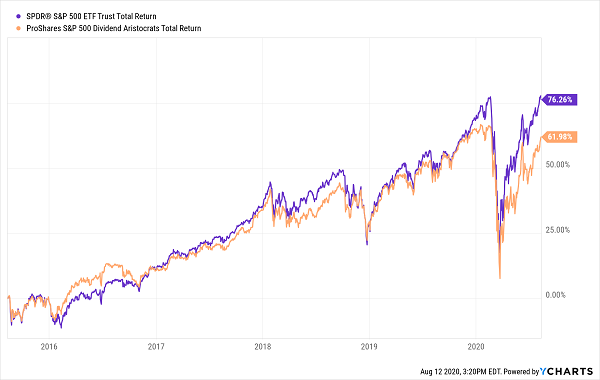 And finally, the last decade. 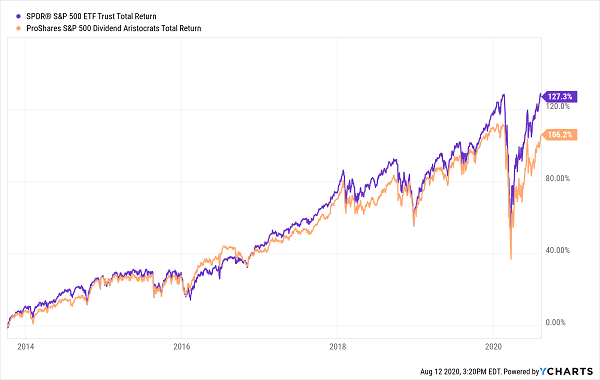 This is disappointing when you consider that these stocks should have a built-in edge due to their continuous payout growth. That’s because a rising dividend is a key catalyst for share prices, as news of a payout hike is almost certain to draw income-hungry investors in.

Few people pay attention to the connection between share-price appreciation and dividend growth, but it’s a pattern I’ve seen time and time again. That’s why it’s a key part of the strategy I use in my Hidden Yields dividend-growth service.

To see what I mean, take a look at Texas Instruments (TXN), which has soared 74% since I recommended it in June 2017, nearly double the S&P 500’s 39% gain. And look at how the share price has followed the dividend higher—point for point! The pattern is unmistakable. 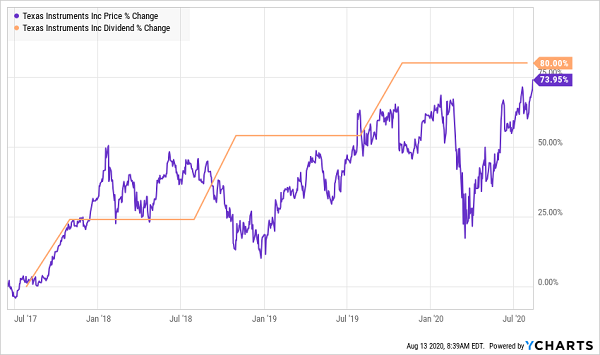 So where does this leave the Aristocrats?

The trouble with these stocks as a group is that they’re weighed down by companies that raise their dividends a tiny amount every year, just to stay in the club! That does little for their share prices. And just as a rising dividend pulls share prices up, a stagnant payout can weigh a stock down, too.

Consider AT&T (T), which gets a lot of attention due to its high current yield, which is 6.9% today. That sounds great until you see this chart: 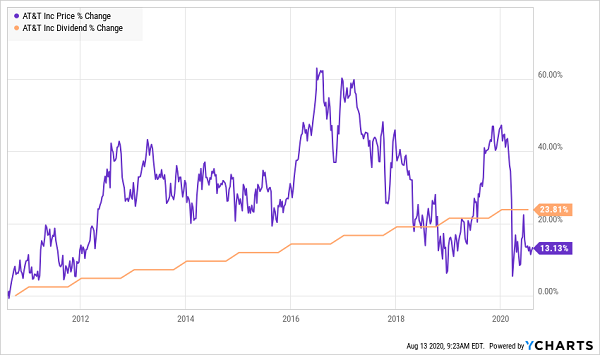 That 23.8% dividend growth is pathetic over a 10-year timespan (it’s literally a penny a year). Compare that with Texas Instruments, which inflated its payout 80% in just over three years!

It’s only a matter of time until weak payout growth like that shows up in the share price. We can see that in the chart above: when the coronavirus put AT&T’s stock to the test, it failed miserably, falling much further than the market.

And while the S&P 500 is now positive on the year, AT&T is still on the mat, even though it’s well-suited to this crisis, as we all sit at home and burn through mobile data, desperate for something to entertain us:

… and Dividend Investors Hang Up 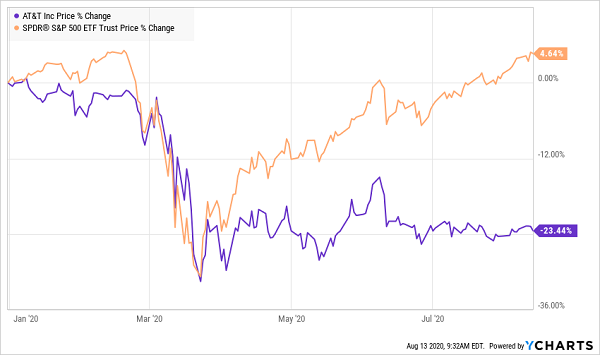 Some Aristocrats Are Strong Performers—but Everyone Knows It

One thing we shouldn’t do is take AT&T’s example to mean all Aristocrats are poor investments. Some do grow their payouts faster than average, driving strong share-price growth as they do. Trouble is, you’ll rarely get a deal on these investor darlings—and certainly not these days.

Take McDonald’s (MCD), which has boosted its payout 127% in the last decade. Its stock followed suit—a bit too much. It’s up 187%, well ahead of the company’s dividend growth. 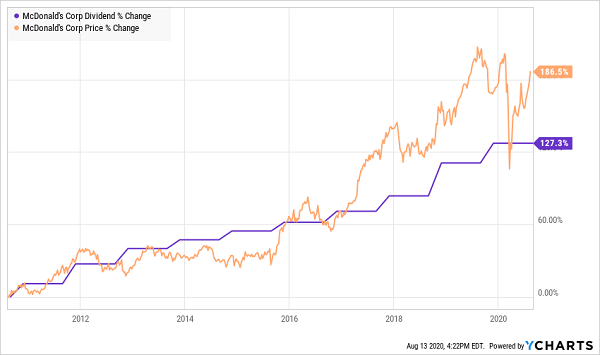 That’s a clear sign a dividend grower is overvalued. And a quick check of the company’s trailing-12-month P/E ratio confirms it: the burger flipper now trades at 33-times earnings, the highest since 2007! 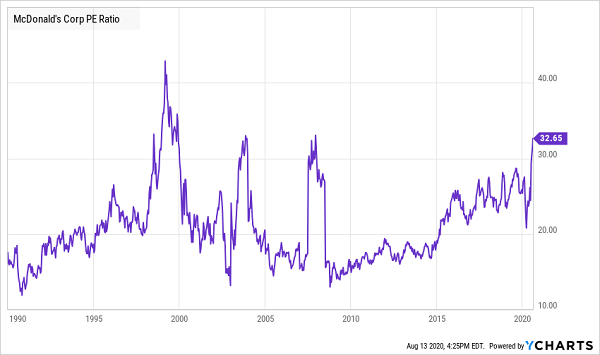 That’s as clear an indication as any that we need to look beyond the Dividend Aristocrats if we want to grow our nest egg and income stream.

And the best way to do that is with …

7 Accelerating Dividends That Crush This Crisis, Double Your Nest Egg

As I’ve just shown you, the Dividend Aristocrats mostly break out into two groups:

There are exceptions, of course, but here’s the upshot: if we want to double our nest egg—and our income stream—we need dividends that are accelerating, not merely bumping along, like AT&T’s tired payout.

That’s why I just released 7 underappreciated stocks whose payouts are set to surge for years to come, pandemic or no.

If you add them to your portfolio right now, you can look forward to double-digit gains—while enjoying steady, growing dividends—no matter how long this crisis drags on, and no matter how low the markets crash.

Normally I reserve the details on investments like these for members of my Hidden Yields service, but given the unprecedented situation we’re facing today, I’m going to share them with you now.

Click here to get everything I have on these 7 “recession-proof” dividend growers: names, tickers, complete dividend histories and just how much income (and upside) you can expect from each one.