What Every Investor Must Know About Bonds in 2018

I’ve been getting a lot of emails from readers worried about how closed-end funds (CEFs)—especially bond-oriented closed-end funds—will perform next year, when the Federal Reserve raises interest rates.

And that’s definitely a when and not an if—there is too much good economic data to suggest the Fed will back off its rate-hike plans, which both it and most US legislators desperately want to happen.

(A couple weeks ago, I gave you my outlook for the US economy in 2018 and named 5 non-bond CEFs to buy before the New Year arrives. Click here to read that article.)

The conventional wisdom on rates and bonds is simple: rising rates are bad for bonds. So bad, in fact, that pretty much every bond out there will get hit when interest rates start going up.

Not so fast. Let’s look at what the numbers say.

The first rate hike in a decade came in December 2015, when Fed Chair Janet Yellen said that a rebounding US economy meant the Fed could start to normalize interest rates. 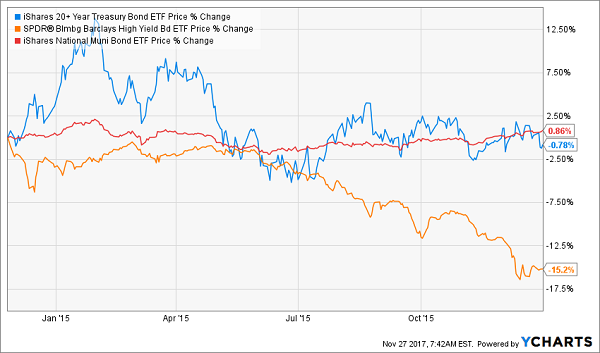 Because here’s the truth: rate hikes really aren’t that bad for bonds.

That is, they don’t have to be—especially if the market knows they’re coming and the Fed telegraphs those rate hikes, as it has been.

In fact, research from Nuveen Asset Management, one of the titans of municipal bond closed-end funds, shows that most types of bonds actually go up when rates move higher. 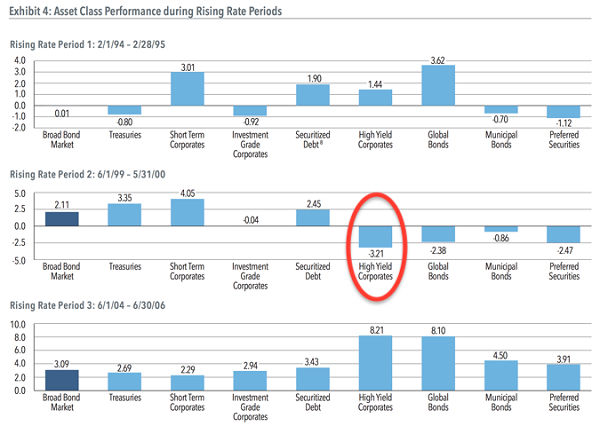 Oh, and that 3.2% loss was when the dot-com bubble burst and corporate bankruptcies spiked, so it had more to do with that than the direction of interest rates.

History repeated in the junk bond collapse of 2015, which had more to do with spiking energy-sector bankruptcies due to the oil-price crash than the 25 basis point hike Yellen enacted that year.

That also explains why junk bonds have been soaring since 2015—bankruptcy rates among these firms have fallen 50% in the last couple years: 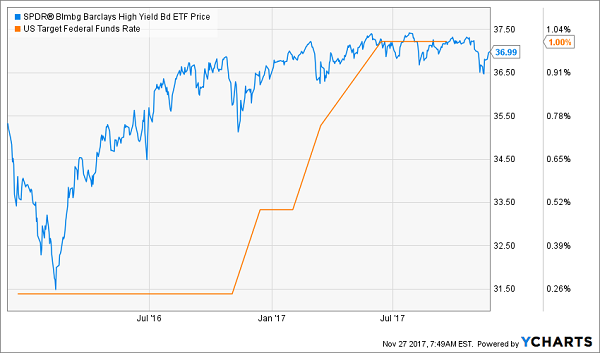 Note how that improvement happened while interest rates soared 300%. Obviously, the rate hikes themselves weren’t affecting junk bond prices as much as the bankruptcy rate. 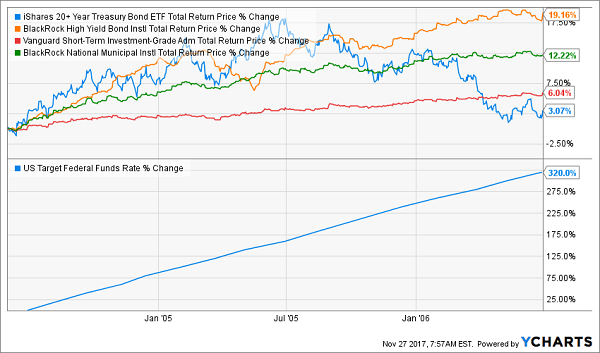 While the Fed funds rate soared 320% (similar to the pace we’ve seen in the last two years), all these funds went up at a healthy clip—in fact, they pretty much all went up at a level you’d expect for the level of risk involved (the lowest-risk Treasuries returning the least and the high-risk junk bonds returning the most).

What are we seeing here?

An important truth: finance in the lab is not the same as finance in the real world! While it’s true that interest rate hikes impact the value of bonds in theory, there are other things that impact bond value in reality.

This doesn’t mean bonds are going to be safe for the near term. After bonds did well in 2004–06, their performance deteriorated in 2008—but notice that bond returns were still positive on the whole even by the end of 2009 (and also notice that interest rates went down during this time of lower performance for bonds): 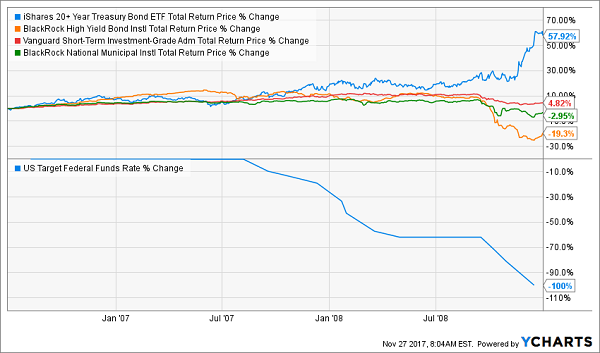 What this does mean is that interest rate risk is a theoretical risk to bond returns, but it is just one of many risks.

In reality, it is usually the least important risk for bond returns. That also means if anyone is telling you to worry about bonds because interest rates are going up, they have a one-dimensional view—and going along with that simple view could cost you a lot of money.

I’m going to go you one better here, because not only should you not worry about interest rates sideswiping bonds in 2018, you should use December 2017—the rest of this month—to buy.

Because when I say bankruptcies—the one figure that can make or break bonds’ performance—are low, I’m not kidding around. Check out the latest numbers, courtesy of Trading Economics:

Bankruptcies No Threat to Bonds in ’18 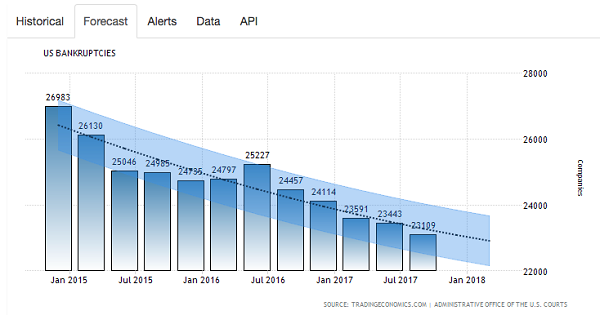 Which brings me back to why December is a great time to buy bonds, especially through my favorite (and in my view the only) way to do so, through high-yield closed end funds.

Take my favorite closed-end bond fund to buy now. As I write, this unsung CEF trades at a ridiculous 11.4% discount to its net asset value (NAV, or what the holdings in its portfolio are actually worth).

That’s way below its historical markdown—and there’s no way it can last.

So why does this deal exist?

You can thank a highly predictable year-end pattern called tax-loss harvesting, when many folks sell at the end of the year in a bid to cut their tax burden.

Check out what this overdone selloff—which has nothing to do with the fund itself—has done to the share price. 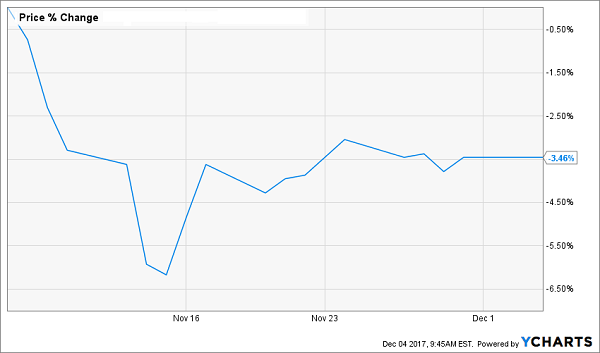 Here’s the upshot: As they do nearly every year, the herd will pile back into this one, setting this fund up for a nice rise in January—or even in late December—especially when they realize they’re missing out on a rock-solid 7.4% dividend here!

When they do, this fund’s gaping 11.5% discount will slam shut, delivering double-digit upside to folks who get in now, in addition to that reliable 7.4% cash payout.

Don’t miss this limited-time opportunity to bank serious gains and income in 2018. CLICK HERE and I’ll share the name, ticker and my complete research on this bargain fund and my 3 other top CEF buys for next year, too!