As I write this, stocks are in the process of giving back some of their “New Year’s bounce”—and I’m hearing from folks who are worried that 2023 will be another 2022.

I get it—it’s only natural to feel that way after the S&P 500 fell some 20% in a year. And those who limited themselves to the tech-focused NASDAQ took it particularly hard—off some 30%+ in ’22.

But just because the market is off to an uncertain start does not mean we’re headed for another mess like last year. In fact, the odds of that are very low.

For one, it’s rare to get two bad years in a row. To see what I mean, remember 2008. Back then, even those who held the “lower-risk” stocks of the S&P 500 underperformed those who held tech last year: 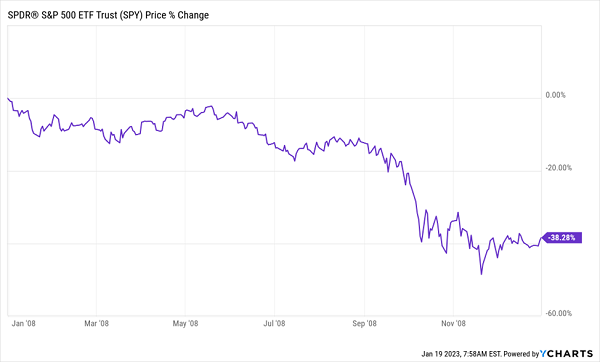 Then came 2009, in which stocks made back a big part of that loss: 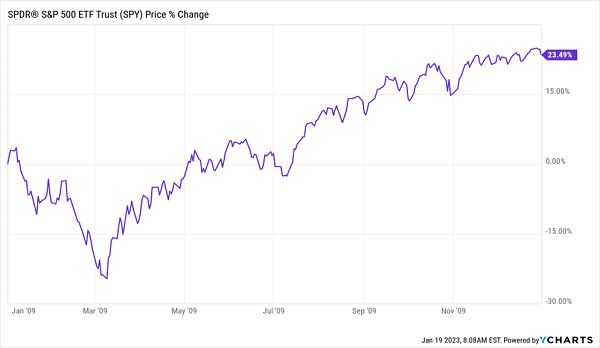 I expect a similar setup this year.

Now let’s talk strategy: we’re not market timers at Contrarian Outlook, but I can tell you that if you’re investing for the long haul, now is a good time to buy. Many CEFs are trading at attractive discounts, and I expect those discounts to disappear as the mood on Wall Street and in the press turns more positive.

That will give contrarian CEF buyers an advantage in a comeback year, which I expect 2023 to be.

To continue our analogy with 2009, consider those who bought a pretty well-known equity CEF back then—the Gabelli Dividend & Income Trust (GDV), which regularly yields 6% or more. I mention it now because it has a lot of S&P 500 stocks, like Mastercard (MA), Microsoft (MSFT), JPMorgan Chase & Co. (JPM) and Honeywell International (HON).

GDV’s discount only narrowed a bit in 2009, from about 19% to a little under 16%. That, plus the fund’s high dividend, was enough to push its overall return past that of the market in ’09:

GDV Shows How CEFs Can Outperform in a Comeback Year 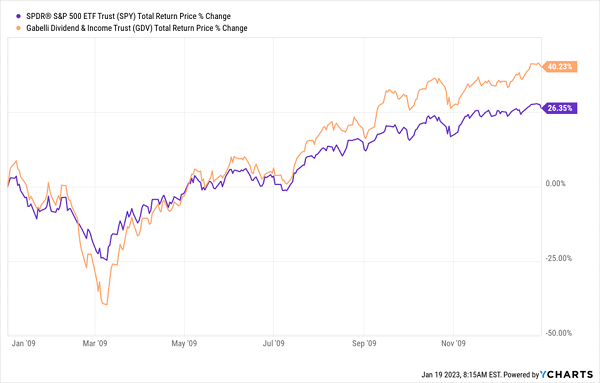 And that’s just from a popular large cap CEF like GDV. The picks in my CEF Insider service’s portfolio have smaller market caps—between $200 million and $1 billion—giving them potential for stronger gains once they’re discovered.

But how can I be sure that this will be a better year than last? Let’s parse the latest data and headlines to get to that part of the story.

Inflation Is Likely Falling Faster Than the Fed Thinks

As you no doubt know, Fed Chair Powell has been aggressively talking down the markets over the past year. Remember his early December news conference, when he seemed to contradict the FOMC’s own statement that it would be data dependent when deciding future rate hikes?

“We still have a ways to go [on rate hikes],” the Fed chief grumbled. Stocks, predictably, tumbled. And Fed member after Fed member has paraded before the press since, with similar messaging that there are more rate hikes to come.

But the data tells a different story—and the Fed will have to take note of it soon.

For one, many Wall Street economists are starting to say that inflation will actually be low by the end of the year (meaning below 3%, and possibly even less than that). In addition, former Bank of England head Adam Posen, who has close ties to Powell, has said inflation will drop to 3% by the end of 2023 and this fact is already “baked in” to the data.

Then there’s the narrative coming out of the futures markets: 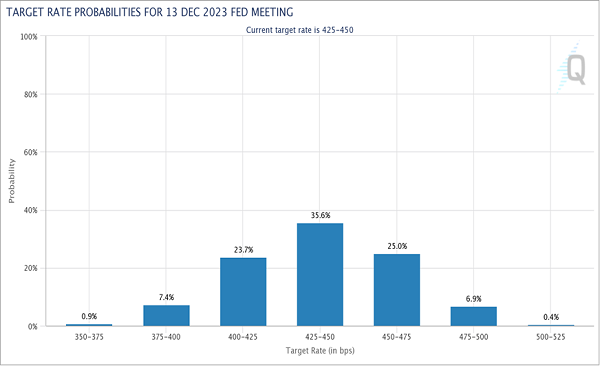 The market expects the Fed’s policy rate to be 425 to 450 basis points—the same as it is now—at the time of the December FOMC meeting. In other words, while the Fed may raise rates a bit in February and March, the market thinks they’ll cut by the end of the year.

Now that inflation has cooled significantly and signs of more cooling are becoming clearer, the Fed’s motive with regard to hike rates will be very different from last year, despite Powell’s tough talk. Last year, he was clearly sweating at the thought that he was about to be the next Arthur F. Burns, the Fed chair remembered for being slow to respond to inflation  in the 1970s.

This year, however, Powell runs the risk of going too far the other way. With inflation tempering and signs of slowing in the global economy (while the US growth story remains largely intact), worries of going too far will certainly weigh on his process soon. The net result—continued US growth and a moderation in rates—is a bullish setup for stocks and CEFs.

Everything we just discussed means that our window to buy top CEFs at bargain prices will likely close soon. As the markets find their footing, CEFs’ discounts will narrow, and their yields will shrink. It’s the price we pay for upside!

To give you a chance to nab the strongest gains and the highest yields, I’ve zeroed in on 4 CEFs I expect to lead the coming rebound. They yield a stout 9.5% on average, and they sport discounts so unusual that I expect them to disappear rapidly, catapulting these funds to 20%+ total returns in the next 12 months.

Don’t miss your chance to buy these 4 funds while they’re still cheap. Click here and I’ll give you the details on my CEF-picking strategy and the opportunity to download a Special Report naming all 4 of these overlooked (for now!) dividend-payers.