Right now, plenty of investors are quaking in their boots, wondering if they should sell their real estate investment trusts (REITs) this month.

Why? Two reasons. Let’s debunk them one at a time. (Then I’ll reveal two REITs that are screaming buys because of this situation and two you need to avoid—or sell right away if you hold them.)

The first worry has to do with an old adage that just won’t go away. Stop me if you’ve heard it before: “REITs perform poorly when interest rates rise.”

It’s true that the Federal Reserve will probably hike rates at least once before we ring in 2017—likely in December, according to traders betting via the Fed funds futures market. But tying that possibility to a looming nosedive for REITs is short-term thinking at its worst.

One thing you can usually bet on is that REITs will sell off the day Fed Chair Janet Yellen makes noises about raising rates. On August 26, for example, she said the case for a rate hike had “strengthened” … and the benchmark Vanguard REIT ETF (VNQ) responded by falling 1%, much more than the S&P 500’s 0.16% decline.

But of course, short time frames (especially a single day!) hardly point to a trend. If you take a longer view, you’ll see that REITs actually tend to outperform as rates head higher. 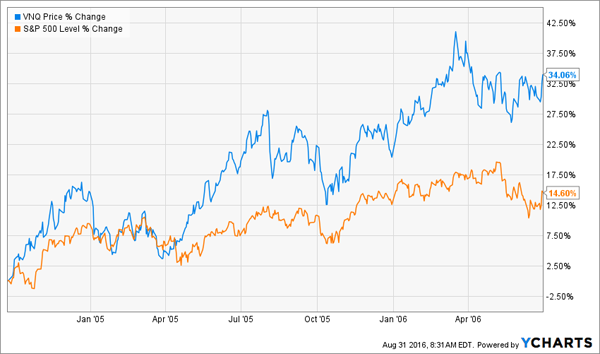 You don’t even have to go back that far to see how flawed the conventional thinking on REITs and rates is. Let’s rewind one year, to September 1, 2015. Then, like now, we were facing at least one rate hike before the year was out.

How did VNQ respond? By gaining nearly 10% over the last four months of 2015—through the actual quarter-point rate hike in December—clobbering the S&P 500 in the process! 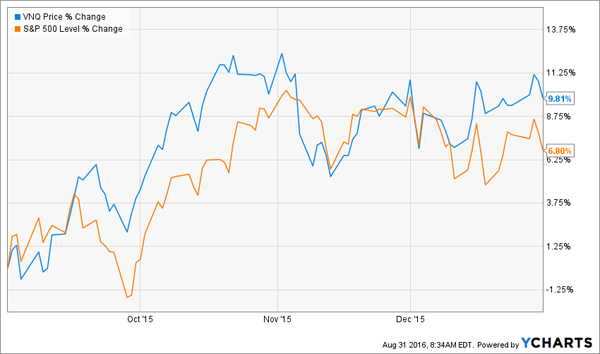 Why the outperformance? A key reason is that once investors take a breath, they realize that at the pace the Fed’s going, it will be a long time before yields on so-called “safe” investments like CDs and treasuries rival high-quality REITs and dividend stocks paying 4% or more.

So what’s the second thing that’s making investors twitchy? The calendar. Now that it’s flipped to September—historically the worst month for stocks—they think the market’s about to crater.

There’s a kernel of truth here: according to the Hulbert Financial Digest, from 1896 through 2014, the Dow fell an average of 1.06% in September, compared to an average gain of 0.75% for all the other months.

But here’s the problem: the pattern doesn’t always repeat. If you were out of the market in September 2013, for example, you missed out on a 2.6% gain.

The bottom line? It’s still a great time to buy REITs, but you need to avoid those with overstretched valuations—they’re particularly vulnerable if rate worries spook the hordes who’ve piled in after Brexit and the other brushfires we’ve seen this year.

So with that in mind, here are two big-name REITs to steer clear of … and two ignored names set to cash in on the upside of higher rates: a prospering economy.

Ventas (VTR) owns senior-housing and healthcare facilities—a great business to be in as more boomers hang it up.

The problem? The shares yield 4.0% today, which, while still attractive, is down from the 5.6% VTR was paying a year ago, due to the stock’s 33% rise since then.

That’s great if you own the shares, but it doesn’t help those of us looking to put new money to work. And the lower current yield means you’re already on the back foot when it comes to boosting the yield on your initial investment. 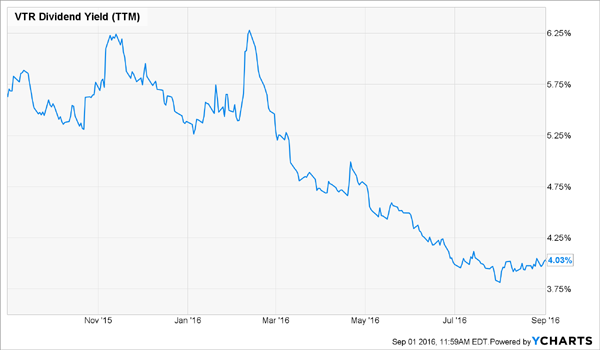 But here’s the real red flag: Ventas was a laggard in the last four months of 2015, rising just 3.3%, well behind the Vanguard REIT ETF and the S&P 500. With history about to repeat and a big run-up under its belt, this one looks set for a fall.

HCP, Inc. (HCP): With Ventas’s shares in the stratosphere, you may be tempted to look to its senior-care cousin, HCP, which has risen just 5% in the last 12 months. Another temptation? HCP’s standout 5.9% dividend yield.

The stock is still recovering after HCP reported a surprise fourth-quarter loss after a writedown at its HCR ManorCare unit, which operates skilled nursing facilities. It now plans to spin off ManorCare into a new REIT, but the terms of the split, and HCP’s dividend policy following it, are still unclear.

That’s just too much uncertainty for my taste, especially when there are better REITs to own, like the two low-key businesses below (and the three other senior-care REITs I’ll tell you about at the end of this article).

2 Buys the Herd Has Missed

ExtraSpace Storage (EXR): Self-storage is primed for growth as Americans pile up more and more stuff while downsizing their homes and moving into cities.

These opposing forces are paying off for ExtraSpace, owner of 1,400 storage facilities in 35 states. In the past five years, EXR has nearly doubled funds from operations (FFO)—the REIT equivalent of earnings per share—letting it deliver investors a dividend that’s soared 457%! 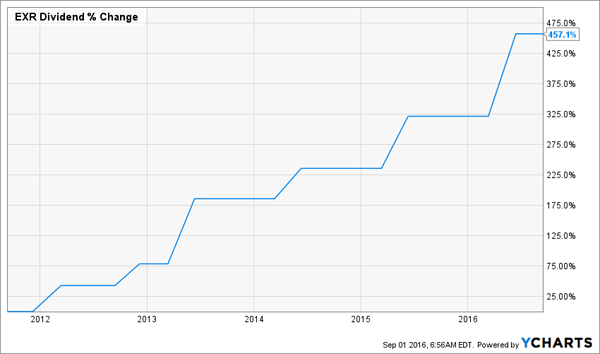 With FFO per share up 25% year-over-year in the second quarter, easily covering the dividend, I expect those hikes to continue. The REIT yields 3.8% today, but you’ll be looking at double that on your initial investment in short order thanks to EXR’s fast payout growth.

The kicker? Self-storage REITs have missed the REIT rally due to exaggerated worries about overcapacity. But EXR is a smart acquirer, buying facilities in cities where demand exceeds supply and forming joint ventures to cut its risk.

So don’t wait. Move into this one today.

Crown Castle International (CCI) has been largely overlooked in the REIT run-up, too. It’s the largest provider of shared wireless infrastructure in the U.S. Mobile data usage is doubling every two years, and CCI owns cell towers and rents antenna space to carriers, primarily in and around cities. It’s a good place to be a landlord.

The company converted to a REIT structure two years ago. Since then, it’s already increased its dividend more than 150%. CCI pays a 3.7% yield and paid out a comfortable 82% of FFO in Q2 (anything under 90% is fine for a REIT).

As current leases expire, CCI will raise the rent on its tenants. Those increases will flow directly to investors in the form of higher dividends.

Ventas looks frothy at these levels, and HCP doesn’t inspire my confidence, either. But luckily, there are still plenty of ways to profit from a trend that absolutely must have a place in your portfolio: the retirement of the baby boomers—the biggest demographic shift in US history.

I’ve zeroed in on 3 little-known senior-care REITs throwing off higher yields than the two overhyped names above: I’m talking about safe payouts of 6.6%, 7.0% … and even 8.9%!

I’m expecting big things from these three hidden gems, too, with payout hikes that will have you yielding 10%+ on your initial investment in no time, plus annual share-price gains of 10% to 15%!

I’ve just released the full surprising story on these 3 must-own investments to my paying subscribers, and now I’d like to invite you to profit from them, too. Simply click here now to get instant access to all of my latest research.