With all this talk of rising rates, it’s surprising that bond funds are doing so well. The largest bond ETF, the iShares Core Total US Bond Market (AGG), is up over 4% in 2016 and hasn’t paused its bull run throughout the year:

Investors are Hungry for Bonds 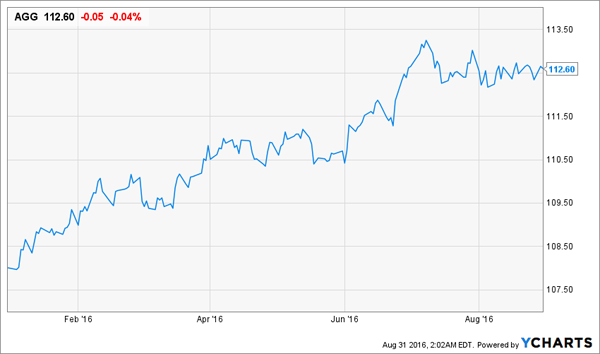 Tax-exempt bonds aren’t doing as well, but they’re still strong. The USAA Tax Exempt Intermediate-Term Bond mutual fund (USATX) is up 2% for 2016, and has not pulled back year-to-date, even during February’s market meltdown: 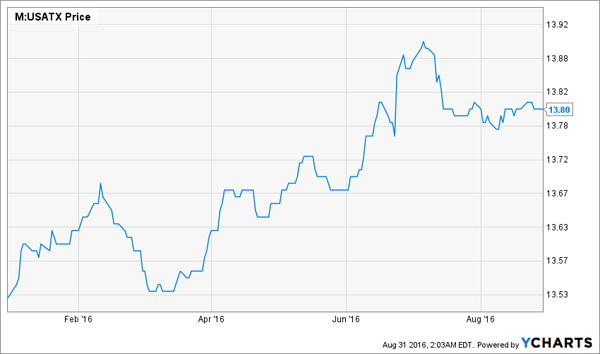 When we look at the yields of these funds, their steady performance is even more surprising. At 3.1%, AGG has a better yield than USATX, which pays just 2.3%. Both, however, are meager returns when we consider inflation averages about 3% per year historically: 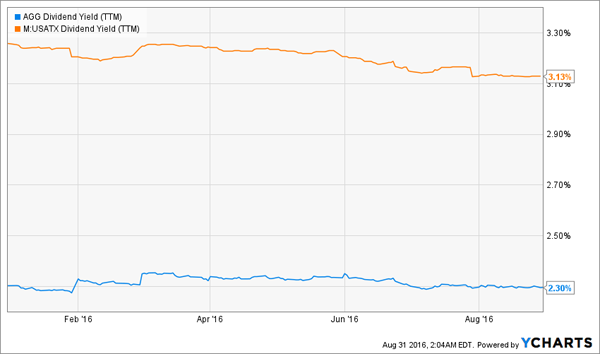 This has led many investors to seek yields elsewhere, especially in municipal bonds. But that is becoming a crowded trade. For example the Fidelity Michigan Municipal Income mutual fund (FMHTX) has seen its yield fall below 3% over the year as its price has risen over 2%:

Price Goes Up, Income Goes Down 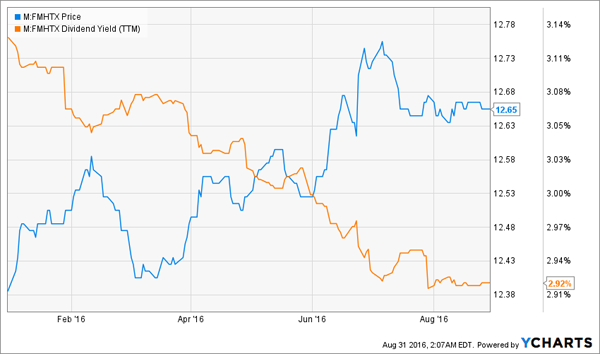 Again, we’re not getting an income stream that can beat inflation – so are we really being compensated for the risk of lending our money to the state of Michigan?

Some investors think this just isn’t worth the effort, so they look elsewhere for income. That’s led some to corporate bonds. iShares has the biggest investment-grade corporate bond ETF, the iBoxx Investment Grade Corporate Bond fund (LQD), which some find attractive because of its incredibly low expense ratio (just 0.15%, versus 0.48% for FMHTX and 0.54% for USATX).

But LQD has problems, too. Its 3.2% dividend yield sits handily  above USATX, yet its dividends are taxable income—which means much of the extra yield is taken by Uncle Sam. And that’s not the only problem with the fund.

The weighted average maturity of LQD’s holdings is over 12 years. This means that the average bond in the fund’s portfolio will mature in over a decade, which means LQD is extremely sensitive to interest rate hikes. If Yellen and the Fed raise rates, LQD’s bonds will decline in value—and so will the ETF’s stock price. That’s what we saw last year, when the fund fell nearly 5% as the Fed chattered about rates and finally raised them in December: 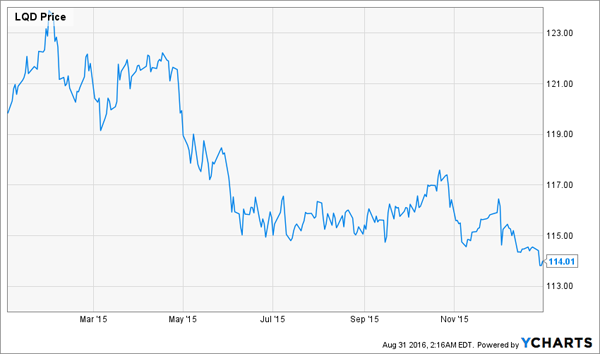 While government bond and total bond funds were a better performer, 2015 wasn’t exactly great for them either: 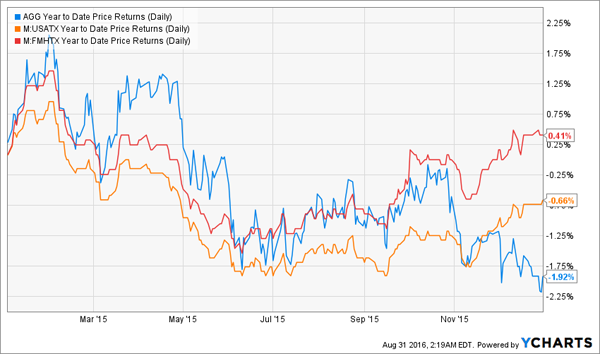 In December when the Fed raised rates, the bond market was ready. 2015 was a steady decline in bond funds as traders geared up for the inevitable. But even then, November and December were a shock. U.S. Treasury Yields rose steadily in 2015, until they skyrocketed at the end of the year as investors prepared for the Fed’s eventual decision to raise interest rates last December:

Traders Prepare for the Federal Reserve 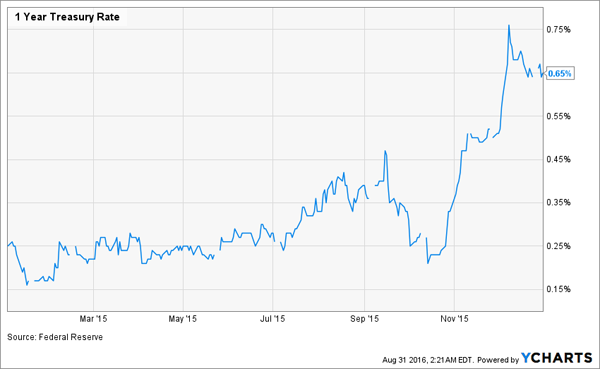 Unfortunately, traders are not preparing themselves in 2016 as they did last year. Instead, U.S. Treasuries have swung wildly between extremes as the financial markets try to figure out the increasingly cryptic and confusing statements coming out of the Federal Reserve. Add on top of that the uncertainty of Brexit and the upcoming U.S. election, and this year’s erratic activity makes a lot of sense: 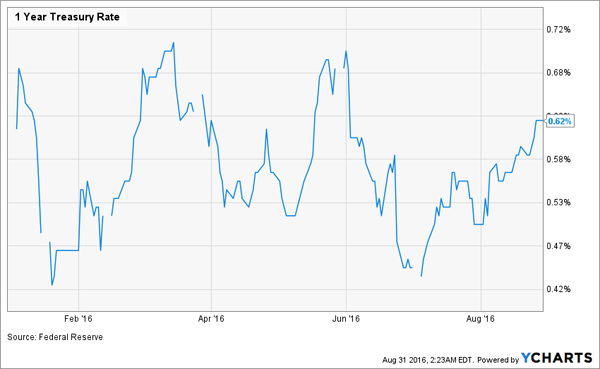 Bond funds should be pricing in this uncertainty, but they are not. The desperate reach for yield has just made these bond funds pricier and pricier, even as the risks get larger and larger.

Total bond market funds demonstrate this issue more than anything. If we look at the Vanguard Total Bond Market ETF (BND), we see just how hungry the market is for bonds—despite the risks: 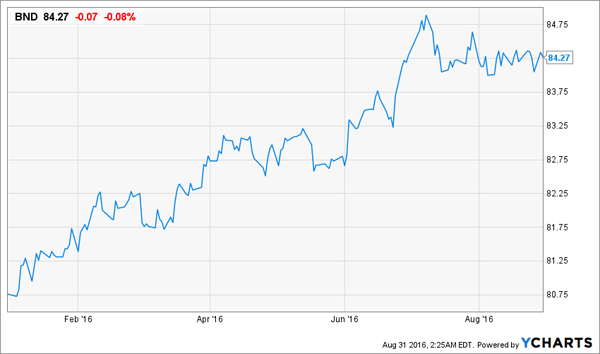 The market’s love for BND is understandable. It’s one of the cheapest funds in the world, with an expense ratio of just 0.06%. That’s so tiny it’s hardly worth thinking about, and is a third cheaper than its bigger competitor, AGG.

But investors need to think about more than just expense ratios. Because of the disconnect between bond fund performance and the real risks to bond funds in the market right now, one needs to be more cautious about buying bonds. You can’t just blindly buy the market and wait for it to go up right now—if any of the major risks from the Fed, the U.S. Government, the European Union, or elsewhere show up, bonds will crash.

This doesn’t mean we should give up on bonds. But it does mean we need to be selective about our bond purchases. We need to buy bond funds that are trading at a significant discount to the value of their holdings. That way, no matter what happens to the bond market, we are not paying full retail price for our holdings.

The other thing we want is a higher yield. Sorry, but 3% just isn’t going to cut it in a world of rising food prices. Oil prices have shot up 26% in 2016—which means gas prices will go up. So will delivery costs, food, consumer goods, and just about everything else.

Everything is Set to Get More Expensive 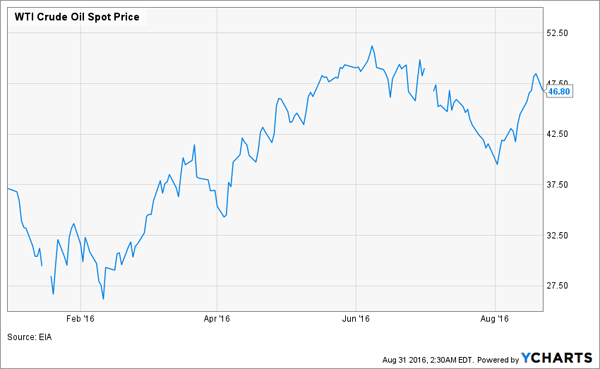 In such a world, I don’t want a 3% income stream. I want 8%. Sound impossible? It isn’t. In fact, there is a group of bond funds that are yielding 8% and are trading at a significant discount to the value of their holdings. That’s why one fund manager nicknamed the “Bond God” has been aggressively recommending these funds over the last few months. But you don’t have to be a billionaire like him to get your hands on these discounted assets paying dividends of 8% or more.

How do you do it? My new report reveals where to find these funds, how to understand their inner workings, and why they are trading at a discount. I’ll also show you how to manage the risk by choosing which funds to buy and when. If you’re interested in these bond funds, and want to learn why most retail investors don’t know they exist, click here for my top three plays right now, including recommended buy prices.