5 Risky Dividends to Dump From Your Portfolio Now

Today I want to tell you about a deadly retirement-planning mistake millions of Americans are making right now—and five stocks you need to weed out of your portfolio yesterday.

More on those in a moment. First, the miscalculation, which comes down to a single figure: 7%.

That’s the average annualized return most people expect from their stock portfolios over the long haul, and with good reason: it’s just below the 7.9% the S&P 500 returned every year, on average, from 1985 to 2015.

But even with a timeframe that long, you need to remember a disclaimer you’ll find in just about every mutual fund prospectus: “past performance does not guarantee future results.”

In April, the McKinsey Global Research Institute released a report warning that the 30-year run of near-8% annualized returns will soon be a memory. That’s because the forces that drove it—falling interest rates, strong Chinese growth and a North American workforce in its prime—are slowing, and even starting to turn on us.

The upshot: over the next 20 years, McKinsey says investors can expect gains no higher than 6.5% annualized … and as low as 4%.

To put that in context, just a two-point drop means a 30-year old today would have to work seven years longer than his or her parents to have the same quality of retirement. (For my complete report on this looming retirement crisis—and how to safeguard your portfolio—click here.)

The canary in the coal mine? Corporate earnings, which are already fading. According to FactSet, S&P 500 firms saw their bottom lines shrink 3.2% in the second quarter, marking the fifth straight quarter of year-over-year declines since—wait for it—Q3 2008 through Q3 2009. 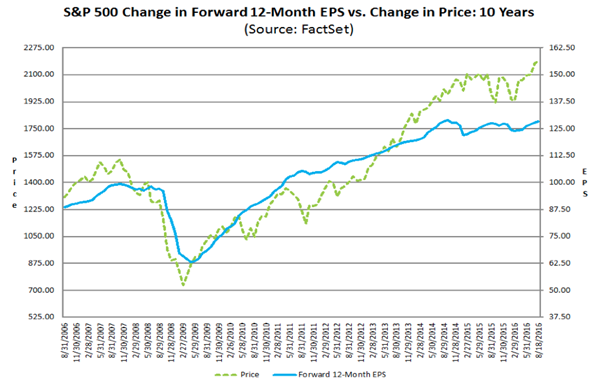 In the sub-7% era, the last companies you’ll want to be caught holding are those with meager sales growth and overstretched valuations. That’s a recipe for big drops as investors come to realize there’s little to support their lofty expectations.

Here are five stocks you’ll want to keep far away from your retirement portfolio—or dump now if you own them:

HD: A Money Pit in the Making

Home Depot (HD) has been a hot property over the past five years, soaring for a 295% gain in that time. But it’s time to flip your HD shares and look for dividend-growth stocks with brighter prospects.

Here’s why: in the company’s Q2 earnings report, it reported a 5.4% same-store sales increase in the U.S., where 87% of its outlets are located. That’s a number any retailer would kill for, but here’s the problem: it marks the slowest growth rate in nine quarters.

Throw in a forward price-to-earnings (P/E) ratio of 21.4—above HD’s five-year average, Lowe’s and the market as a whole—and this stock looks ripe for a correction.

Realty Income: A Risk Not Worth Taking

One thing investors often get wrong about real estate investment trusts (REITs) is that they perform poorly when interest rates go up. But the numbers don’t bear that out: in the last rising-rate period, from July 2004 through June 2006, the benchmark Vanguard REIT ETF (VNQ) actually gained 34%!

But of course, just because REITs generally performed well in a specific period doesn’t mean all REITs did—one laggard back then, underperforming both VNQ and the S&P 500, was current investor favorite Realty Income (O), owner of retail properties across the nation. 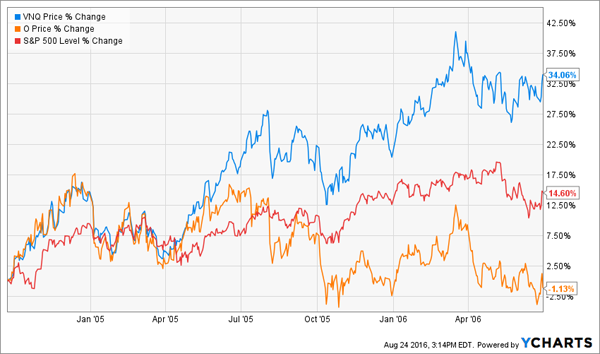 Today, the shares trade at 24 times trailing-twelve-month funds from operations (FFO)—the REIT equivalent of earnings per share (EPS)—way up from 17 times a year ago. That sets the stage for an even worse performance if the Fed starts making noises about raising rates again—which it could do as early as its next meeting on September 20–21—or if Realty Income hits another roadblock.

That might be a risk worth taking if you were getting a high yield in return. But after O’s big run-up this year, that’s not happening: the REIT’s trailing-twelve-month dividend yield is 3.5% today, within a whisker of its all-time low of 3.25%. 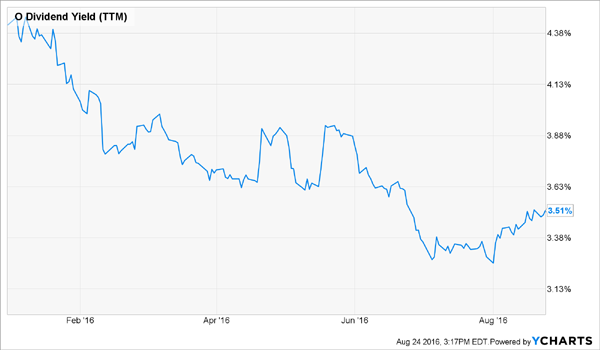 All of this tells me it’s time to take some money off the table. And if you don’t hold O, you’re better off looking elsewhere.

A Two-Pack of Brewers to Sell

That’s because investors poured into both companies’ stocks this year, thinking sales of beer, wine and spirits will keep rising, no matter what happens with the Chinese stock market or Brexit. That would keep both brewers’ earnings and dividends on the upswing, too.

The nosebleed valuations alone would keep me away from this twosome right now, particularly Anheuser-Busch, whose top and bottom lines are both shrinking. The company also faces uncertainty over its planned merger with rival SABMiller. 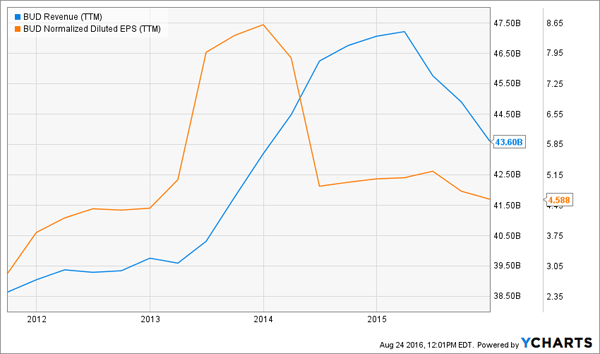 Constellation, peddler of imported brews like Corona Extra and Modelo, as well as wine and spirits, is faring better. But any bad news could send the stock falling back toward its five-year average forward P/E ratio of 18.8—and a reversion to that level would shave about 29% from the share price.

Meantime, consumers have been ordering up more rounds of craft beer and fewer of big labels like Bud in the last few years. The major brewers have responded by snapping up smaller players, such as Constellation’s $1-billion buyout of California-based Ballast Point last year.

But they could be jumping aboard at the peak: according to figures from Bernstein Research analyst Trevor Stirling, craft beer sales were up 6% year-to-date as of the end of June, but that pales next to the 16% growth the American Brewers Association says craft purveyors notched in 2015.

If that number holds up, along with the 0.2% decline in overall beer volumes we saw last year, it could mark the start of a worrying trend for STZ and BUD.

Altria Group (MO), like Realty Income, offers a historically low yield for considerable risk. Check out the diverging paths its dividend yield and forward P/E ratio have taken over the past year: 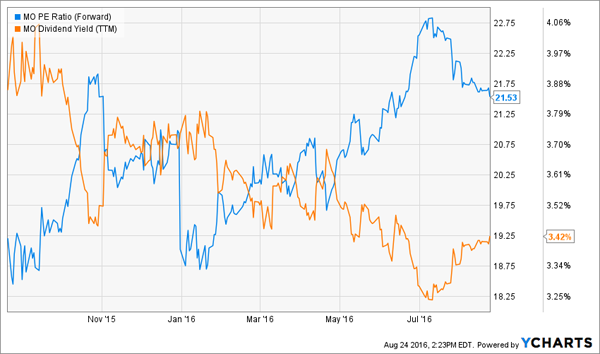 The smoking rate continues to decline in the U.S., with just 16.8% of Americans lighting up on a regular basis, according to the Centers for Disease Control. Altria, whose Marlboro brand controls 44% of the U.S. cigarette market, is trying to offset that by raising its prices.

Despite those efforts, its sales fell 1.4% in Q2 from a year earlier, while cost cuts boosted adjusted EPS by 9.5%. Altria’s strategy may work for now, but slashing costs can only take you so far, while price hikes only increase smokers’ desire to quit.

That means the company will need to find new ways to grow its sales. But so far, it has little to show for its diversification efforts: cigarettes still accounted for 89% of revenue in Q2. That’s an awfully high dependence on a single product—particularly one with high legal and regulatory risks—for a retirement stock.

3 Cheap Dividend Growers to Save You From the Retirement Crisis

In fact, my research team and I have just uncovered 3 strong dividend growers you’ll want to make sure you buy before the looming retirement crisis becomes a reality.

All three yield 3% to 4% now, but I expect you’ll be yielding 12% or more on your original investment in 6 years or less, thanks to their skyrocketing dividend payouts. Meantime, their current yields will stay about the same as growth-starved investors discover these hidden gems and bid up the shares.

The end result? In just a few short years, you’ll be looking at triple-digit share price gains and an income stream that’s quadrupled in size! Click here now to get the full story and the names of these 3 incredible growth rockets.