3 Dividends Up To 10.3% For The Coming Retirement Crisis

Utility stocks have had a great year, but it isn’t too late to get into this sector at a reasonable valuation and lock in a 7% yield. Of course, you could always just buy the Utilities SPDR ETF (XLU) and wait for the rising tide to drive this indexing fund higher.

But there are two big problems with this approach. First, the ETF is up over 15% year-to-date thanks to the run-up in utilities:

Too Great a Year for Utilities? 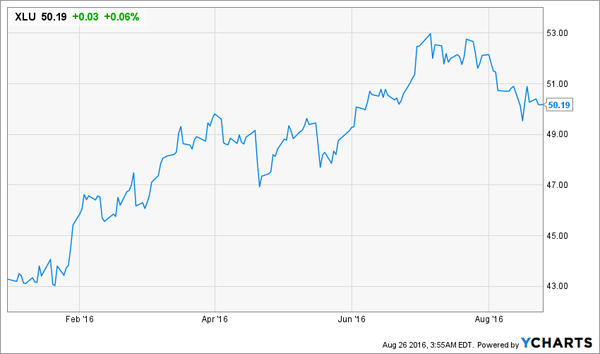 The other problem: this fund yields just 3.2%. Now that isn’t bad compared to the S&P 500, but that’s less than 1 percentage point above the more stable and lower risk SPDR S&P Dividend ETF (SDY):

Low Dividends Not Compensating for Risk 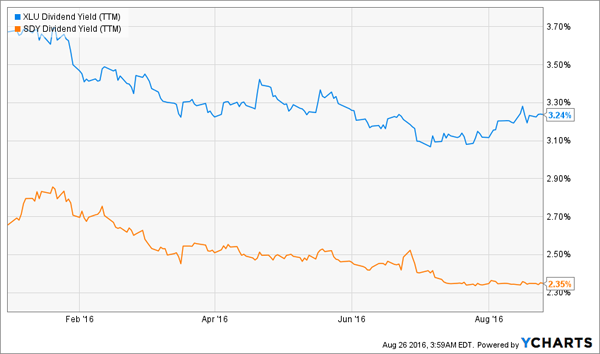 If we’re going to get into utilities after they’ve run up 15%, we’re going to have to be more selective to get a better yield and less risk. So where can we go?

We can start with the BlackRock Utility & Infrastructure Trust (BUI). This diversified fund is actively managed fund that invests in a variety of infrastructure firms such as telecommunications, water, electricity, and so on. BUI yields 7.4%, more than twice XLU, and has more or less maintained the same level of distributions over the last four years. It also is currently trading at a 4% discount to its NAV, so we’re actually getting its assets on sale, whereas XLU is trading at its NAV.

On top of BUI, I’d add CorEnergy Infrastructure Trust (CORR) and get a 10% yield. This stock has been a roller coaster. It’s up 100% year-to-date after plummeting late last year: 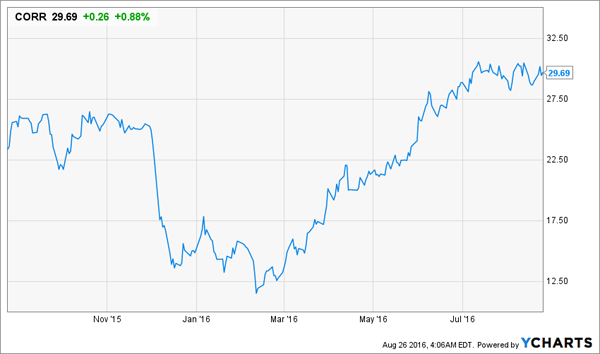 What happened? CORR is an infrastructure REIT, meaning that the company’s tenants are all in the energy sector—and we know cheap oil and natural gas has caused that sector’s bankruptcies to skyrocket. Concerns about the company’s tenants not paying as they go under, particularly Pinedale and GIGS Energy XXI. Since both of those companies are going through restructuring or bankruptcy procedures, and because they’re big tenants for CORR, the risk here is apparent.

But then something strange happened: in July, the company announced that “all tenants continue to make timely rent payments.” Despite their financial troubles, they are still paying their rents, and it seems they will continue to do so for the foreseeable future. With the risks now lower, the company has surged.

Of course there’s still risk, which is why the company is paying a 10% dividend. But the situation for CORR’s tenants is improving, meaning that dividend is likely to decline as the stock price goes up even further.

A lower risk infrastructure REIT can offset the risks with CORR while still paying a 5.5% dividend. InfraREIT (HIFR) is in the same business as CorEnergy, but its tenants are not in bankruptcy and its funds from operations are 108% of distributions, while revenues have been rising over 10% year-over-year on average. Despite this, the stock is down year-to-date, making it a particularly good value right now: 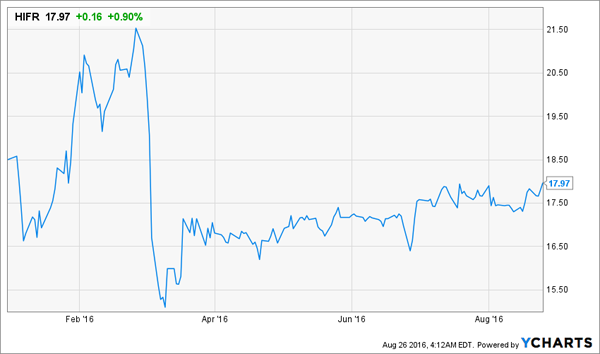 HIFR has suffered a lot since its 2015 IPO, largely because the market misunderstands its business model and because it’s so young. InfraREIT owns electric power lines in Texas, and worries about the oil market hurting that state’s economy are also partly the cause of the sell-off.

However, these fears are overblown. In less than two years, it’s boosted its dividend twice and improved its payout coverage. With that in mind, the risks behind the company seem to be behind it.

Admittedly, making a portfolio of these three stocks seems riskier than just buying and holding XLU. It also seems riskier than buying the most popular utility companies, like Southern Company (SO) and Duke Energy Corporation (DUK), which yield a bit over 4%.

There’s only one problem with these companies: they’re extremely overvalued. The market has begun to realize this, which is why they’re both off from their 52-week high and have been falling for the last month (just as we predicted):

A Little off the Top for Overpriced Utilities 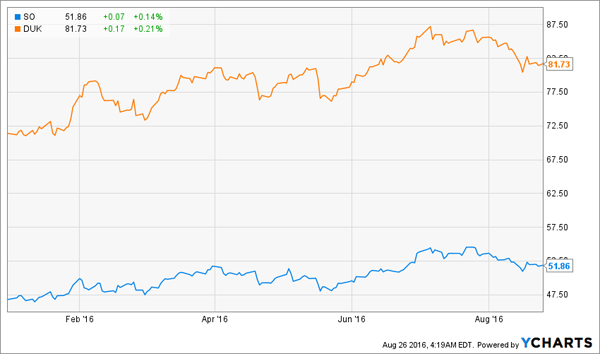 Considering the fact that these stocks’ P/E ratios exceeded 20 right before they started to fall, the recent decline is unsurprising. Who wants to pay 20X for flat earnings? 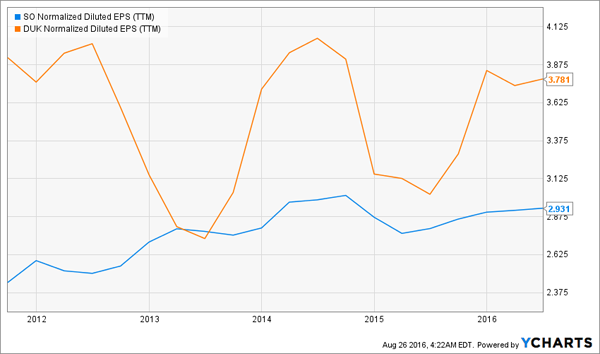 Yet the company’s P/E ratios have just gone up and up, meaning these earnings are more expensive than they were 5 years ago: 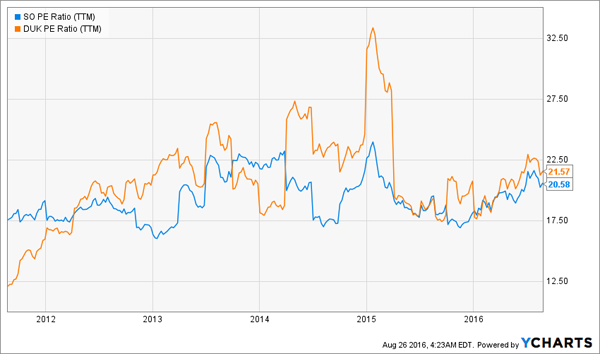 To get real high dividends and value, I’d rather look at misunderstood infrastructure REITs and discounted utility funds instead of buying the big and increasingly expensive names that are beginning to show technical weakness.

What’s driven the monstrous increase in utility stocks in 2016? Just like REITs, which have soared in 2016, we’re seeing symptoms of a broader problem: retirees need income, and there are few options out there to get a real and reliable income stream. This is leading many retirees to reach for yield and buy higher yielding stocks, which in turn is making them overpriced and overvalued.

What’s the solution to this retirement crisis? There are still many dividend growth stocks flying under the radar that provide great value and great growth potential. HIFR is one of them, but there are many more.

You can get a strong and growing dividend by buying these stocks, while also building a diversified portfolio that will withstand the shocks of a future financial crisis.

Buying these stocks in addition to some secure 8% paying stocks and funds can create a high and growing income stream. Let me show you how to find these stocks with specifics on my favorite names including tickers and best buy prices.