2016 has been a crazy year—so it’s no surprise closed-end funds (CEFs) have been offering crazy returns.

As we’ll see in a moment, the best fund is up over 50%, which crushes just about every unleveraged ETF and mutual fund out there. Plus, that fund pays a whopping 7.6% yield—which is pretty typical for CEFs. If you bought in when it was at its 52-week low, you would have been getting an unbelievable 14.7% yield throughout 2016, while also seeing your portfolio’s market value go up and up.

This is the power of getting into the right CEF at the right time, and it shouldn’t be ignored.

But even after its huge run-up, buying this fund, and funds like it, would give you over $76,000 in annual income on a million-dollar nest egg, compared to a depressing $26,000 if you put that money in US Treasuries instead.

Of course, there have been plenty of losers this year, too, and those losers scare off many investors. The worst CEF fell 28%. Fortunately, its dividend payouts still helped offset the price declines, so holders of the fund are really down just 22% for 2016. Still, that’s awful in a year when the S&P 500 rose by double digits.

So the key question for 2017 is: how do you avoid drops like these while getting into the winners before they take off?

It may sound difficult, but it’s not impossible.

At our Contrarian Income Report service, we’ve been recommending a basket of CEFs in diversified asset groups, including bonds, stocks and real estate across various sectors.

For 2016, our CEF picks have returned 12.7%, and if you bought all of them right now, your average dividend yield would be 8.4%. Of course, that means the yield was even higher for many of the funds when we first picked them.

How did we get such high returns and a high income stream, too?

It boils down to selectively picking funds with proven track records when they’re priced right, then diving into factors like past performance, management quality, the characteristics of the portfolio and our future market outlook.

This isn’t as easy as simply reinvesting dividends from stocks like AT&T (T) or Verizon (VZ), but it also means getting an income stream that’s 87% higher than those telco stocks from a portfolio that’s diversified across hundreds of companies and a dozen sectors.

And if we take a look at both the best and worst CEFs of 2016, we see one common theme: highly concentrated funds were the biggest winners and losers, again teaching us that diversification is key if you want to build a portfolio that outperforms the market and minimizes volatility.

Looking back on 2016, a collapse in healthcare funds almost seems preordained. During the presidential election, Hillary Clinton put pharma companies in the crosshairs, making them a high-risk asset for most of the year.

Investors who expected relief from Obamacare critic and now president-elect Donald Trump have been disappointed, as Trump has publicly vowed to tackle drug prices and has backtracked from his earlier commitment to eradicate Obamacare completely. Healthcare stocks have taken a dive ever since.

When we look at ETFs, however, the carnage isn’t so terrible. The iShares Dow Jones US Healthcare ETF (IYH) is down 4% for 2016; Vanguard’s Health Care ETF (VHT) is down a little more. 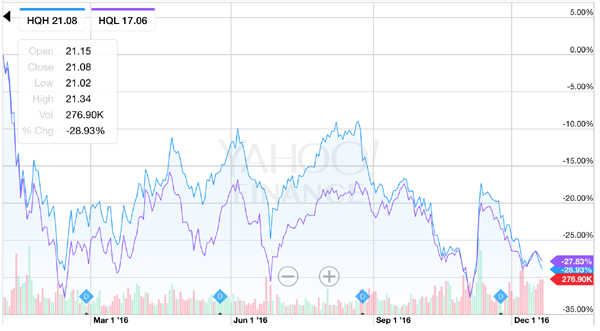 Not only have these funds plummeted in price, but their net asset value (NAV) has fallen by about the same amount. In fact, 2016 has been the only year that these funds have gone down in value since 2008.

This all seems horrifying … which is why I’m a lot more interested in these funds than I’ve been at any point since the global financial crisis. With their pullback, they’re now paying 9.4% in dividends, which excludes special distributions—and both funds paid specials in 2016.

For specialist funds, the 1.2% fees are not very high, and both funds have impressive track records. HQH has had a total return of 256% since its inception, and HQL has returned 236% over the same period. Their NAVs are higher than they were when the funds were launched—which is rare for the CEF universe.

What does all of this tell us? HQH and HQL are good funds that have had a bad year.

The outperformers of 2016 are exactly what you’d expect them to be: energy funds. 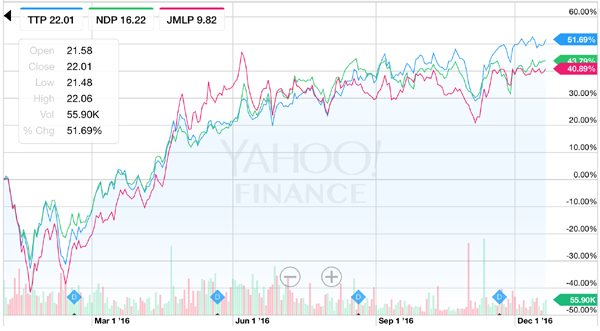 This chart is every investor’s dream: up and to the right, sustaining double-digit gains for months. The Tortoise Pipeline & Energy Fund (TTP) is this year’s clear winner, with a year-to-date price return of over 51% on top of its 7.6% dividend yield as I write this. The fund’s NAV has gone up 44% in the same period, and it’s now on offer at a 9.4% discount.

Similarly, Tortoise Energy Independence (NDP) is up 43.8%, and the Nuveen All Cap Energy MLP Opportunities Fund (JMLP) is up 40.9%.

If you held these funds this year, congratulations. But if you’re thinking of buying right now, I’d recommend caution. These funds have historically been closely correlated with the price of oil, which is notoriously volatile and unpredictable. And oil has only gone up 17% in 2016, while these funds have shot up way higher.

Their short-term run-up masks a longer-term weakness. Going back a few years, we see that each of these funds has declined in value since their inception: This also means the NAV of each of these funds is much less than it was when they launched—and they’re all much newer than the Tekla funds, which have been around since the ’90s.

Also, these funds don’t pay special dividends, and their distributions are at risk. NDP and TTP have kept the same payouts since their IPOs in 2011 and 2012, but those steady dividends have come at a loss of capital. A disturbing 97% of TTP’s payouts are return of capital, which means the fund is literally returning shareholder’s cash in the form of dividends, creating the illusion of a real return while the fund’s NAV goes down further. And JMLP’s dividend is down 24.8% since its IPO just two years ago!

The bottom line? Even though these two funds had a great 2016, I’m not interested unless they can start delivering real growth to their net assets and stop cutting their dividends.

The Healthcare Investors Fund and the Life Science Investors fund look set to bounce back in 2017, and their 9.4% yields are tough to beat.

But if you have all of your eggs in one basket, you’re running the risk of getting slaughtered next time the market turns on the sector—and it easily could, if Donald Trump throws us another curveball on health policy.

Instead of putting your hard-earned cash at risk by piling it into a single sector, this powerful strategy safeguards your money by spreading it out over 6 safe high-yielding investments. They come from a wide range of sectors and asset classes, including CEFs, real estate investment trusts (REITs), preferred stocks and more.

And thanks to its 8.0% dividend yield, it will kick-start a $40,000 income stream on an investment as modest as $500,000—and you’ll never have to sell a share to keep that cash rolling in, no matter what the broader market does.

Not only that, when you check out this powerful portfolio today, I’ll also give you access to the diversified basket of CEFs I mentioned earlier—the one that returned 12.7% for us in 2016 and pays an 8.4% yield to boot.

Simply click here to get instant access to these portfolios and learn how easy it is to kick-start your own safe 8.0% income stream today.