Looking for cheap stocks throwing off double-digit dividend hikes in 2017?

Bad news: it’s getting tougher to dig up these hallowed companies—and easier to fall victim to a dividend cut.

Consider the S&P 500, the be-all-and-end-all for most people when it comes to stock picking.

According to FactSet, 44 of the index’s constituents had payout ratios (or the percentage of earnings headed out the door as dividends) that were above 100% in Q3. That’s nearly 9% of the index, the second-highest total in a decade.

Meantime, the S&P 500’s average payout ratio hit 40.2% during the quarter, the highest level in seven years. And to say valuations are stretched is an understatement, with the index now boasting a nosebleed P/E ratio of 26.2.

But don’t worry. All is not lost. Far from it.

For one, FactSet sees the payout ratio pulling back to 36.9% in the next 12 months, thanks to stronger earnings growth.

And don’t forget Donald Trump’s tax proposals, which include slashing the corporate tax rate and giving US companies a “tax holiday” so they can shuttle overseas cash home. Unless Trump imposes restrictions, a good chunk of that windfall will wind up in investors’ pockets.

With all this in mind, I’ve sifted out 4 undervalued stocks set to deliver double-digit dividend growth next year and beyond. Let’s dive into them, starting with an airline few investors see as a dividend star.

DAL: The Next Great Dividend Stock?

Don’t look now, but airlines are slowly becoming terrific income investments, with Delta Air Lines (DAL), leading the way on the yield front among the four major US carriers.

That’s not much to brag about that yield is just 1.6%. But Delta’s payout has soared 238% since the company started paying dividends in September 2013. 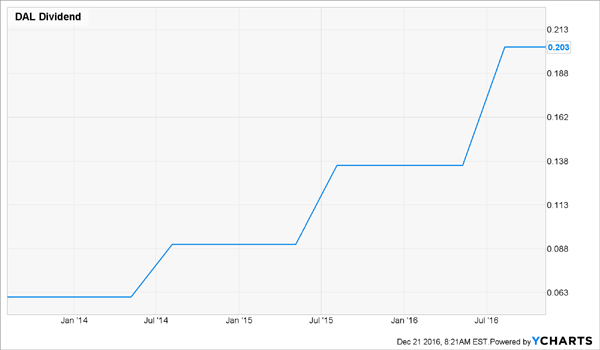 In other words, if you bought back then, you can forget about a 1.6% yield. You’re already collecting a nice 3.9% on your initial buy.

Is another big hike likely in 2017? All signs point to yes. The company is a free-cash-flow machine, generating $4.1 billion worth in the last 12 months alone, and just 9.8% of that went to dividend payments.

DAL has missed out on the rally this year, trading roughly flat amid concerns over rising oil prices and a new labor contract that will give the company’s pilots a 30% raise by 2019.

But that overlooks an uptick in business travel post-election, which is already lifting DAL’s revenue per available seat mile, and consolidation in the airline industry, which has put an end to the grinding price wars of the 1990s and 2000s.

Two other benefits? The stock is cheap, trading at just 8.3-times trailing-twelve-month earnings, and management’s taking advantage of that by repurchasing shares, which supports earnings per share (EPS) and helps throw a floor under the share price. 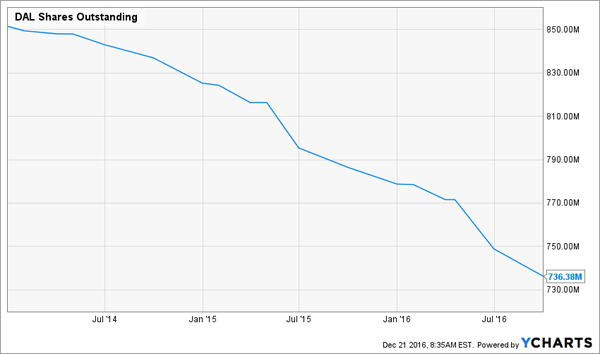 Hormel: Buy Along With the Boss

Hormel Foods (HRL): Share repurchases and dividend hikes are two signs that management’s confident, but there’s another sign I like even more: when those who know the company best buy in.

That’s what’s happening at Hormel, whose just-retired CEO, Jeffrey Ettinger, snapped up $9.7 million worth of shares on November 30. Ettinger is one of HRL’s biggest insider investors, with 2,152,210 of the meatpacker’s shares in his personal account.

It’s a canny move, because it gets him in ahead of a 17% increase in HRL’s quarterly dividend, to $0.17, with the first installment going out in February. The stock currently yields 2.0%.

You can tick the “value” box, too. HRL’s trailing-twelve-month price-to-earnings (P/E) ratio is 21.3, near levels it hasn’t seen since August 2014. And investors who bought then have scored a nearly 60% total return in a little more than two years. 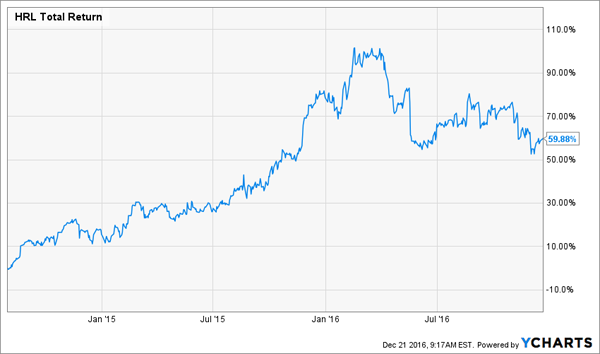 SHW: A Bargain in Disguise

Sherwin-Williams (SHW) is almost never cheap, at least compared to the benchmark legendary investor Peter Lynch gave us (a P/E ratio of 15 or less), but with a P/E of 22.9, it’s well below its five-year average of 26.9. 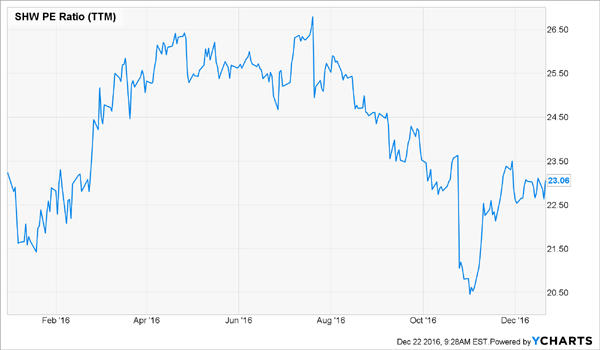 That’s a solid entry point for the paint maker, which is set to close its $11.3-billion merger with Valspar (VAL) in the first quarter. That will make it the world’s biggest paint company, with revenue of $15.6 billion.

It’s a big buy for Sherwin, whose market cap is $25.0 billion, but VAL will start chipping in to EPS right away (it earned $4.35 a share in the last 12 months), and Sherwin expects to wring $280 million in savings out of the combined firm in the first two years, rising to $320 million a year thereafter.

Sherwin should also cash in on US construction spending, which jumped 3.4% in October, and Donald Trump’s infrastructure plans; the new firm will get about 75% of its revenue from North America.

And don’t worry, none of this should drag on Sherwin’s soaring dividend, which has more than doubled in the last five years: SHW’s payout ratio (or the percentage of earnings paid out as dividends) is just 26.7%, well below the 50% I like to see in dividend growers.

ESS: A Housing REIT With a Tech Edge

Investors have thrown Essex overboard as they fret about the impact of rising interest rates on REITs. As a result, the stock is down about 5% year-to-date and trades at 19.7-times trailing-twelve-month funds from operations (FFO), a better measure of REIT performance than earnings, down from 25.0-times a year ago.

It’s a classic case of first-level investors overreacting to the headlines. Because rising rates—and the strong economy they signal—will be actually be bullish for Essex. The REIT is focused on tech hubs like the San Francisco Bay Area, Los Angeles and Seattle, home to a potent combo: pricey homeownership and throngs of millennials, many of whom would rather rent anyway.

FFO has risen at an 8% annualized rate since the REIT’s IPO, driving 22 straight years of dividend hikes for shareholders. The stock currently yields 2.8%.

The dividend accounts for just 58% of that estimate, which is easily manageable; REITs typically boast ratios of 85% or even 90%. The last double-digit payout hike (an 11% increase) came last February, and I’m looking for a bigger hike this February—so the time to buy is now.

Revealed: My 3 Best Dividend-Growth Stocks for 2017

Sure, Delta, Hormel, Essex and Sherwin look like great buys now, but they still don’t compare to my top 3 dividend-growth ideas today.

My first is a lesser-known Midwest bank that’s still an incredibly cheap growth stock. It’s delivered 240% payout gains since 2010, with no sign of slowing down.

Its executives know this—which is why, like Mr. Ettinger at Hormel, they’re loading up on the stock, purchasing 96,322 shares for their personal accounts over the past 12 months.

Then there’s my favorite industrial stock, which couldn’t be more boring: it focuses on containerboard, so it’s being totally overlooked as investors scramble to cash in on the “Trump bump” we’ve seen since November 8.

That’s perfect for us, because this cash cow is also a growth machine. Its dividend is likely to double again over the next few years, which means you’ll see 100%+ returns as its stock price follows its payout higher.

And as much as I like Essex Property Trust, there’s another growth REIT I like even better. It’s a “pick and shovel” play on the e-commerce boom, renting out warehouses to companies that sell products online.

Thanks to the ongoing e-commerce boom, this firm is growing its FFO and dividends by 20%+ annually. This means you’ll see returns of 100%+ in three or four years—and you’ll be paid a growing 3% yield while you wait.

I just wrapped up a special report highlighting these 3 companies. It includes their names, tickers and my full analysis. Click here to access your copy of my “dividend windfall” report today.