The mainstream media and the market go into panic mode when they fear rates are going up. I’m hearing more worries about a major stock correction coming in 2017. Since Janet Yellen’s interest rate hike, the market has taken a dip—and the trend is worrying: 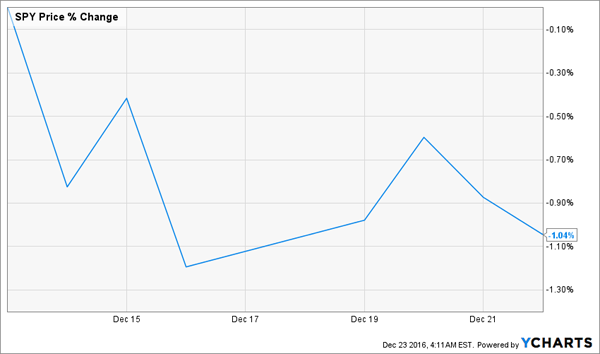 The Rally Is Over

Investors are losing faith in the Trump rally, and many people are anticipating more declines to come. The Fed said it’s going to raise rates three times next year—and each rate hike is expected to drive more investors out of the stock market and into safer and better-yielding US Treasuries.

I’ve seen this before. Many times, in fact. The last time was in December 2015, when Yellen raised rates and more people worried that the S&P 500 would collapse. The SPDR S&P 500 ETF (SPY) tanked in short order: 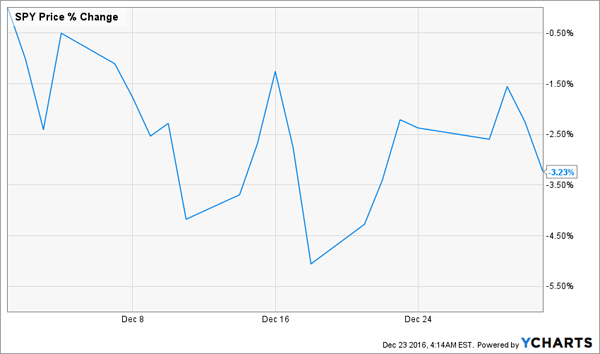 And that selloff just got worse at the beginning of the new year: 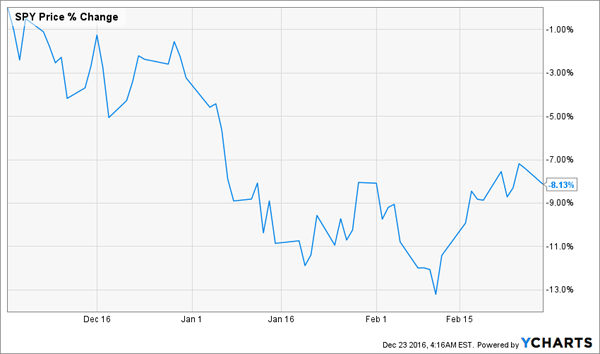 Of course, the market was overreacting, and stocks quickly recovered: 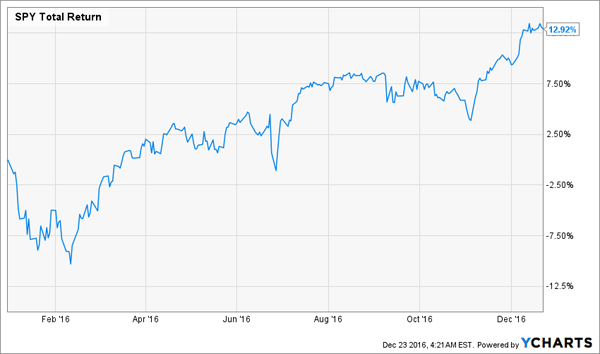 The rise in the stock market, despite fears of an interest rate hike, proves that selling stocks when you’re expecting rates to go up is a silly, money-losing strategy. We can prove this over and over again by looking at different moments in history. Over the past decade, stocks have gone up three times when Treasury rates rose: 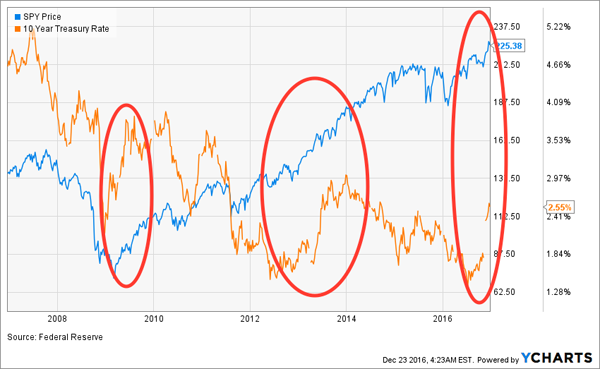 If we go back even further in history, we see the same thing: 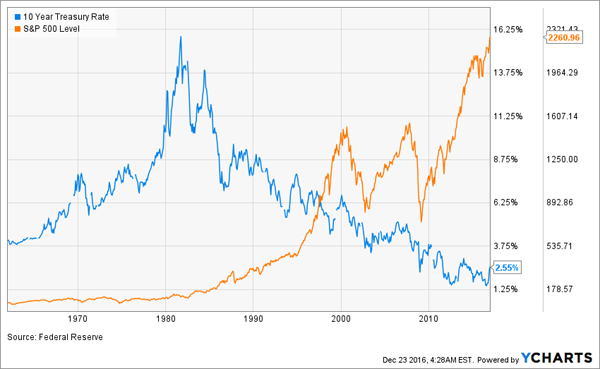 In the early 1980s, interest rates doubled from their 1978 levels over a few years—and the stock market rose 50% at the same time:

Higher Rates? So What! 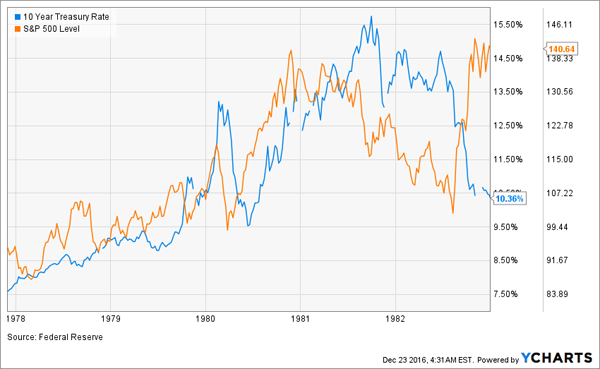 Then in the late 1980s, rates rose swiftly, and the market stayed roughly flat: 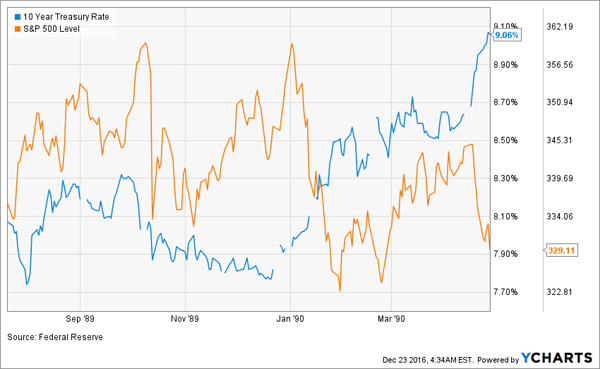 What makes this even more fascinating is that America suffered a recession at this time because of the Federal Reserve’s restrictive monetary policy. By the time the recession ended, stocks were over 20% higher: 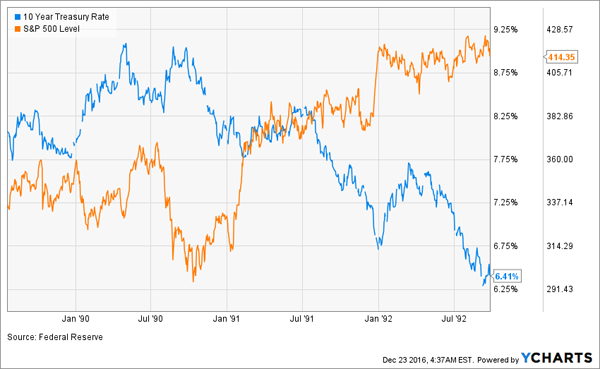 In fact, we should worry about falling interest rates more than anything else. The biggest bear markets in the last two decades happened at times when interest rates were going down. Look at 2008–2009:

Rates and Stocks in Lockstep 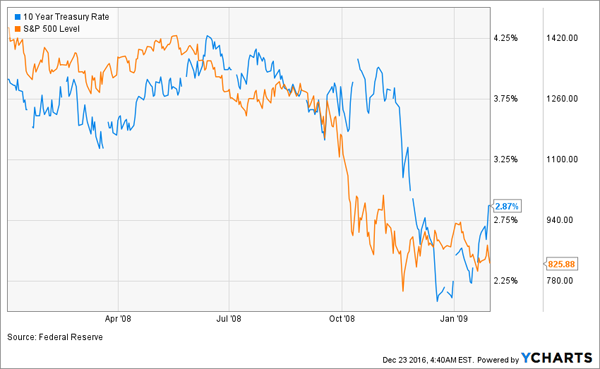 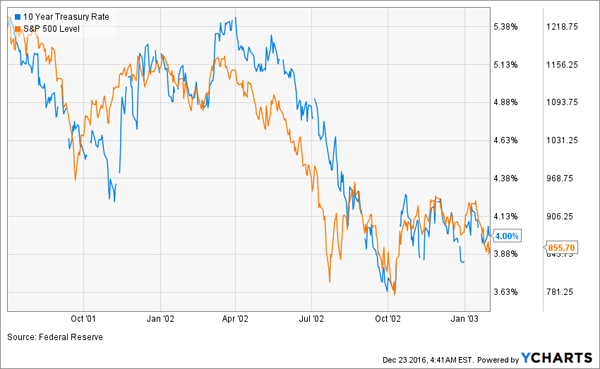 The lesson is clear: don’t sell your stocks if you think rates are going to go up.

What to Buy Instead

So what should you buy? You could just buy the S&P 500 and hope to ride the rising market tide. But with a price-to-earnings ratio of 26 and tons of overvalued, highly volatile companies, I like to be more selective when I buy stocks.

The S&P 500 is paying about 2% in dividends right now. You can try to get bigger payouts by just buying the biggest dividend payers in the index, like Frontier Communications (FTR), CenturyLink (CTL) and HCP Inc. (HCP). But if you did that, here’s how your portfolio would look after 2016: 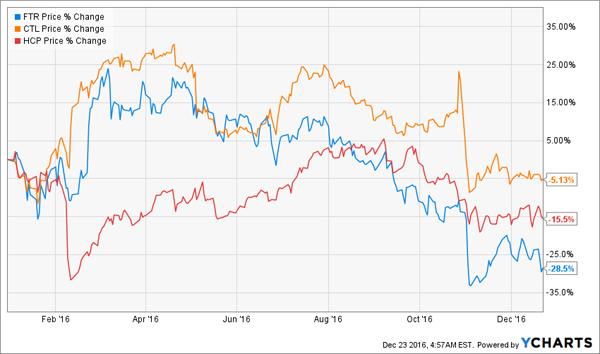 Instead of “yield traps” like these—Frontier pays 12.6% today while losing money at the same time—I recommend investing in 6 other, far safer high yielders now. We’ve combined all 6 into a diversified portfolio that yields a safe—and growing—8.0%.

That means you can immediately generate $40,000 in income on a $500,000 nest egg. And you’ll still have exposure to high-quality S&P 500 companies, while avoiding riskier stocks like Frontier.

Here’s what I like best about this potent new portfolio: it lets you live on dividends alone—without having to sell a single share—and you don’t have to be a millionaire to do it. With a modest nest egg, you can generate enough income to easily maintain a very comfortable lifestyle.

Better yet, you can do it without having to be glued to the market’s daily gyrations. Because who cares what stock prices are doing when you know your income is safe?

This is precisely the right way to approach retirement investing. But most dividend payers don’t pay enough on their own to get you there … and dangerous high yielders like Frontier threaten to ruin your golden years completely.

I want to show you a better way. Go right here to get all the details on my brand-new 8.0% “No-Withdrawal” retirement portfolio now.