I’m sure you noticed that when America decided on a Republican-majority Senate and Democrat-majority House, the markets jumped.

The best news: it’s just the beginning of what’s likely to be a long-term uptrend in stocks. So if you sold during the recent market panic, you’re going to miss out on that upswing—that is, unless you buy now.

But what to buy? While the SPDR S&P 500 ETF (SPY) is already up 3.6% since the end of October, it still has gains ahead because of slower investors who haven’t come back into the market  after last month’s panic selling. If you buy now, you might beat a lot of them to the punch.

But I have a better idea.

Instead of getting SPY, you could buy the Nuveen S&P 500 Dynamic Overwrite Fund (SPXX), a closed-end fund (CEF) that owns the same stocks as SPY but pays a whopping 7.1% dividend, which is obviously a lot better than the 1.8% payout SPY gives you.

There’s another nice thing about SPXX: it’s not trading at a big premium for the first time in a while .

Granted, it’s technically still at a small (0.2%) premium—but keep in mind that this is a CEF that’s often traded at a much bigger premium to its net asset value, or NAV (the real mark-to-market value of its portfolio) over the last couple years. As a result, its current market price sits near levels we haven’t seen since the middle of 2017, in relation to its NAV:

A Premium Fund Goes on Sale 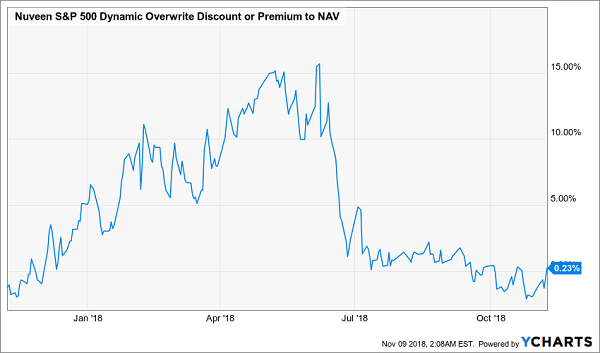 Why has this premium all-but disappeared all of a sudden? It’s simple: with the market panic, the recent heavy investment in SPXX went with it—but that investment is about to come back.

The reason why? Volatility.

You see, SPXX not only buys S&P 500 stocks, but it also sells call options (a type of derivative used by professionals as a kind of insurance on their portfolios), which are the main source of that 7.1% income stream.

The income it gets from selling these options rises with volatility. Below, you can see the market jumping into SPXX, driving up its premium to NAV, when the VIX, a measure of how much volatility investors expect, rose at the start of 2018: 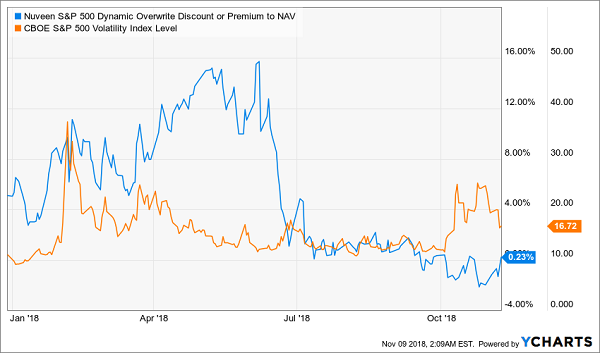 Notice how the fund’s premium has evaporated but volatility has recently spiked? That’s a market inefficiency—investors haven’t realized that this fund has an extremely safe income stream because of recent volatility, in addition to capital gains potential from its portfolio of stocks rising with the broader market.

SPXX isn’t the only fund you should consider now.

There’s also the PIMCO Dynamic Income Fund (PDI), which has given investors a shocking return since inception—a whopping 188.2% in just 6 years! 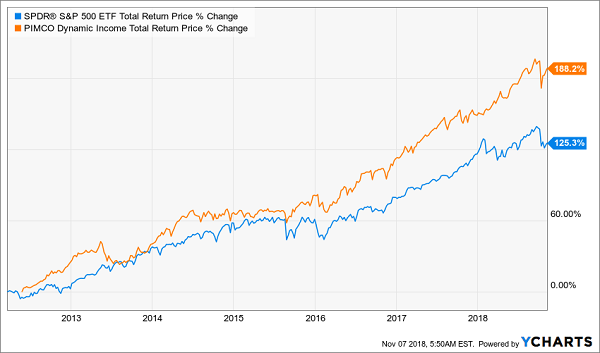 Not only is that much bigger than the S&P 500’s still-impressive 125.3% return over the same time period, but PDI has also thrown off an 8.2% dividend yield that has been increasing in recent years.

A high yielder that’s beating the market and growing payouts? What’s the catch?

I’ll be honest with you: the catch is fear. PDI doesn’t invest in stocks; it taps PIMCO’s crack team of analysts to invest in the most oversold mortgage-backed securities (MBS’s). If you saw The Big Short, you know that MBS’s were the derivatives behind the Great Recession.

Because of that, the much safer MBS’s that survive today have been undersold by a market suffering from recency bias—that is, the tendency for investors to think the next crisis will look like the last one, even though that’s never the case. Because of a stronger economy, tougher banking regulations and much better lending standards, the MBS apocalypse of last decade is unlikely to happen again.

But few investors are thinking rationally enough to pick up MBS’s, which has been an opportunity PIMCO has been exploiting for years—and PDI shareholders have been reaping the benefits.

These are nowhere near the only 2 funds out there for investors to pick up for a massive income stream and strong returns. Because of the market’s recent panic, there are literally dozens of funds likely to provide double-digit capital gains in a matter of weeks.

If you’re wondering why I’ve zeroed in on these two funds out of those dozens, it’s because I’ve picked these funds before, and now is a great time to loop back on them.

In fact, I most recently recommended SPXX on November 1st, at the end of the October selloff, and I recommended PDI on October 22nd, when the market was still in the middle of its hysterical panic.

And since I recommended both funds, they’ve begun to recover. PDI, for example, dipped shortly after my October 22nd call but has recovered to gain 1%. Since it’s clear that this fund has a lot more room to go before the market rebound has played itself out, now is just as good a time as last month to get into this misunderstood quality dividend grower.

As for SPXX, it’s already up a nice 6.3% since my recommendation—a massive return for just about a week! 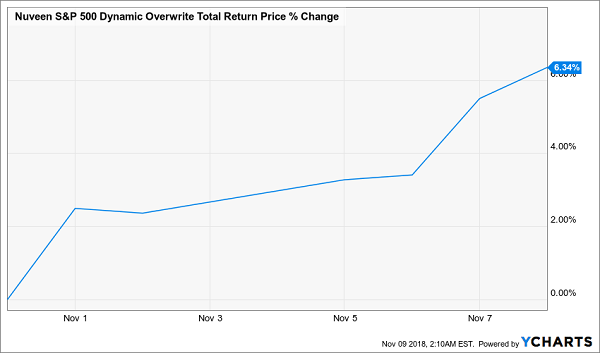 Fortunately it’s not too late here, either. But you may not have much time left on either of these funds; markets tend to rally after an election when they were correcting before the results were known, which sets us up for strong returns, starting now.

The truth is, with the midterms out of the way, all the pieces are in place for a strong market rise in 2019.

If you don’t believe me, consider the latest from Yardeni Research, which tells us that Year 3 of a presidential term (which starts in January) is by far the most profitable, with an average 12.8% gain on the year. 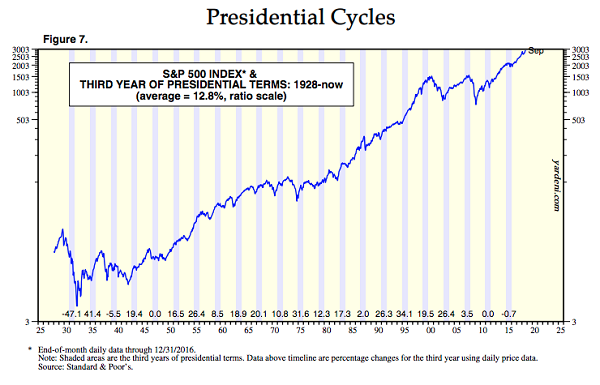 The best way to tap into these gains? CEFs, of course! And you know me: I’ve got 5 hand-picked buys for you, throwing off an average 8% dividend yield now.

That incredible 8% dividend is more than just an income stream—it’s a critical safety cushion for your nest egg.

Because you and I both know that even if markets do bag a double-digit gain next year, as our Year 3 trend suggests, there will be plenty of ups and downs along the way. But because you’ll get a big slice of your gain in cash dividends, you won’t have to worry about any of that.

You can simply pocket your dividend checks while you wait for tranquility to return!

And these funds’ massive payouts aren’t your only safety valve. Each one also boasts an outrageous discount to NAV that just can’t last. As these markdowns slam shut, I’m expecting 20%+ price upside from each and every one of these 5 funds.

Add in their outsized 8%+ dividends, and you’re looking at a 28%+ windfall here!

But you must act now. With the midterms in the rear-view, these 5 buys are already starting to tick higher, and I don’t want you to miss your chance.

Click here to get full details on all 5 of these cash machines—names, tickers, buy-under prices and everything you need to know to kick-start your 8% cash stream today.