If you’ve been holding cash and waiting for the perfect buying opportunity, your time to strike is now.

Because a very predictable market pattern has been repeating itself in the last few months—and is about to do so again.

First, there was the euphoria of January, followed by the panic selling of February and March, followed by renewed confidence in April, May and early June. But then, just a couple weeks ago, the market went back to panic mode. The reason is familiar: the looming trade war.

Back in February and March, President Trump threatened tariffs on goods from China, the EU and even Canada. But then these tensions eased in April and May, so investors went back to focusing on earnings—only to again go back to the fear of a damaging trade war.

This pattern has become predictable enough to become a profit-making opportunity for us. Because whether there is a trade war or not, its impact on the S&P 500 is much less than the fear-mongers would have you believe.

Better yet, this fear has handed us 2 deeply discounted funds that are terrific buys now. Before I show them to you, let’s dig into why now is the time to pick them up.

The S&P’s Dirty Secret: Overseas Sales Are Already a Non-Factor

The idea that a trade war would hurt US companies, and therefore US stock prices, makes sense on the surface: it would raise the prices—and cut the sales—of American goods abroad. 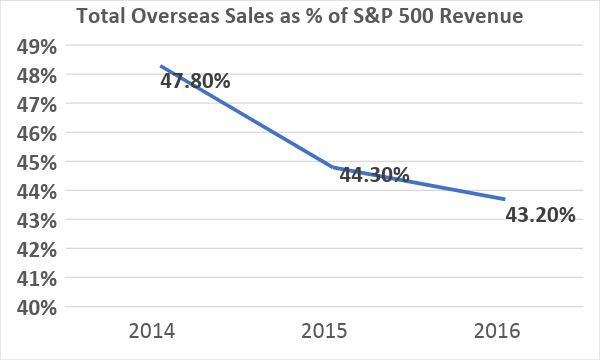 Although sales abroad fell during this time, stocks rose solidly, reaching their highest point in the three-year period when overseas sales were at their lowest point. 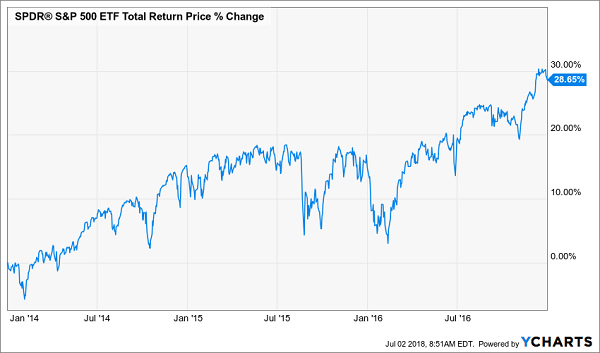 This amounts to a 9.5% annualized return, far above the 7.5%-ish average return the stock market usually gives investors. And don’t forget that this happened when foreign sales were falling for American companies.

The reason why this happened is simple, and often overlooked: domestic US sales were rising enough to compensate for the fall in foreign sales, and earnings growth was soaring thanks to improved productivity in the US.

These trends have improved in the last two years—and, in fact, 2018 is on track to see the highest revenue growth in over a decade for S&P 500 companies, even when accounting for any potential loss of foreign sales. Meantime, the US dollar is getting stronger, US employment and wage growth are on the rise and consumers are more confident—and thus willing to spend more.

Which means every selloff in light of trade war fears is a big buying opportunity.

2 Trade War Winners—From the CUBA to the USA

So what are the funds to consider in this counter-intuitive trade-war game of chicken?

The first one will shock you: the Herzfeld Caribbean Basin Fund (CUBA), a fund that is designed to give investors exposure to Cuba.

I’ve been critical of this fund in the past, because it simply does not do what it claims. But that’s a virtue now. CUBA’s largest holdings are actually American companies that theoretically would benefit the most from Cuba opening up to capitalism, stocks like Royal Caribbean Cruise Lines (RCL), Seaboard Corp. (SEB) and Lennar Corp. (LEN).

Since these firms are well positioned to benefit from the rising dollar, which will give domestic Americans more purchasing power (and Americans are these companies’ biggest customers), CUBA is actually chock full of companies poised to benefit from America’s fundamentally strong economy.

But investors have overlooked that and discounted CUBA based solely on its name. That’s why its discount to net asset value (NAV) has dropped to its widest point in three years and is far below its 11.3% average discount in the last decade:

A Cheap Fund Gets a Lot Cheaper 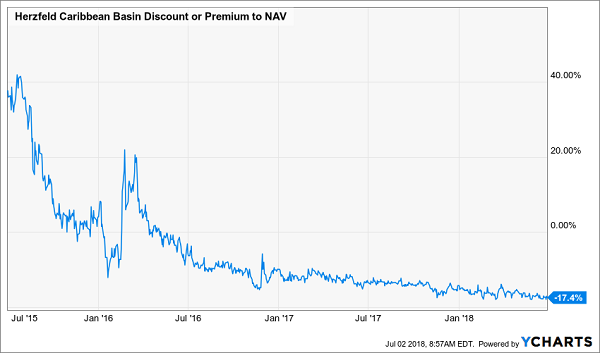 There’s just one snag with CUBA—its dividend is irregular and tiny (its current yield is less than 2%).

So if you want a similar play but with a bigger income stream, you might want to consider the Liberty All-Star Equity Fund (USA) instead.

From its name and ticker, you can tell that USA is very different from CUBA—at least when it comes to how the fund’s managers market it to potential investors.

In reality, though, both are heavily invested in companies that profit from a stronger American consumer. USA’s top holdings include Visa (V), Bank of America (BAC), PayPal (PYPL), Home Depot (HD) and Capital One Financial (COF)—in other words, firms heavily exposed to the American economy that won’t suffer big losses if the rest of the world buys fewer American products.

And, unlike CUBA, USA has a regular and high-yielding dividend, at 10.6% currently.

There’s another nice thing about USA: although it has a huge yield versus the benchmark SPDR S&P 500 ETF (SPY), which pays out a measly 1.8%, USA has beaten the index by a wide margin—proving that its managers are making wise and profitable stock picks. 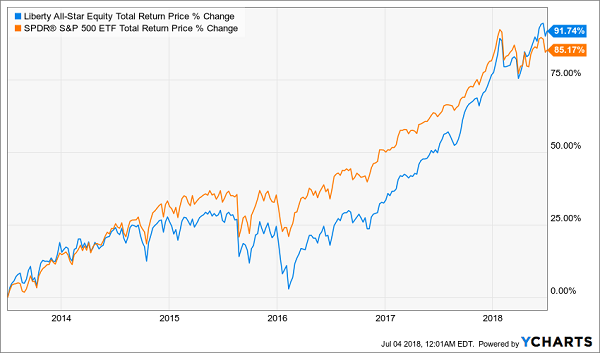 This market outperformance (which has only shown up in the last few months, when a trade war has become a very real possibility) is very possibly the result of USA’s focus on, well, the USA—and that may mean it will continue to outperform if a trade war is unavoidable.

CUBA and USA are both worthy of places on your watch list, but keep in mind that CUBA, in particular, is highly speculative. Investors pay little attention to this fund beyond its stock symbol, and if President Trump takes a harder line on the island nation—which could happen at any moment—the fund’s discount (and price) could go lower.

That may be no problem if you have some “play money” to put on the table, but it’s no way to build your retirement nest egg.

For that, I encourage you to snap up the 4 funds I just rolled out to members of my CEF Insider service. I’m ready to give you full details on all 4 now.

Taken together, these 4 income dynamos throw off a 7.1% average dividend. But all 4 also trade at unprecedented discounts to NAV—so bizarre, in fact, that my team and I have them pegged for easy 20%+ price upside in the next year.

So when you tack on their 7.1% average CASH payout, you get a blockbuster 27.1% total return here—by as soon as next summer!

Because you get some nice downside insurance here, too, thanks to these 4 funds’ incredible diversification across a huge number of investments—US stocks, foreign stocks, corporate bonds, preferred stocks and real estate investment trusts, to name a few. And many of these investments have little, if any, correlation to the stock market.

PLUS, each and every one of these “fantastic 4” is run by a proven Wall Street vet who’s shown their chops in good markets and bad.

These 4 fund picks are perfect for the tariff- and interest rate–obsessed times we live in. Their 7.1% average dividend is attractive enough on its own, so you can consider their 20%+ price upside a nice “finder’s fee” for getting in now!

Don’t miss out on this unique opportunity. CLICK HERE and I’ll give you everything I have on these 4 funds: names, ticker symbols, buy-under prices, my complete analysis of management and much more.