Today I need to warn you about a common mistake I’ve seen burn investors over and over. I’ll also show you 3 bargain dividend growth stocks that are great buys for your retirement portfolio now; more on those in a moment.

It’s called “reaching for yield” and its latest victims are investors who bought SeaWorld Entertainment (SEAS) based solely on the stock’s 6.5% dividend yield.

Too bad that high yield was because everyone else saw the company’s problems—falling revenue and shrinking operating margins as the public soured on SeaWorld’s killer-whale shows—coming from a mile away … and jumped overboard. In the 6 months prior to the announcement, the stock sunk 39%!

That drove its dividend yield way up (because you calculate yield by dividing the annual dividend by the current share price)—setting up a dangerous “yield trap” ready to spring on the unwary: 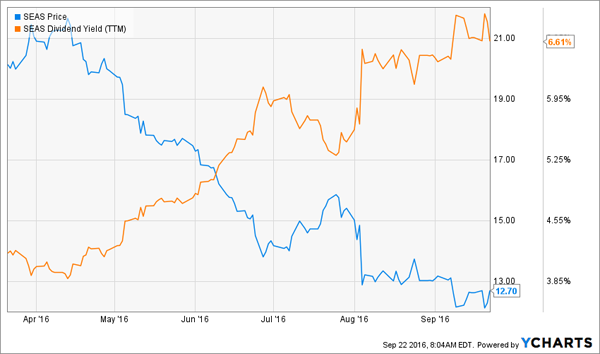 And spring it did on September 19, when management announced it would slash the payout by 52% this quarter, then eliminate it altogether. The move robbed SEAS investors of income and poured saltwater on the wound by knocking another 5% off the stock price following the announcement.

Let’s be honest, most people managed to avoid the SeaWorld fiasco, but I have bad news for you: there will be plenty more SeaWorlds in the years ahead—and it will take a keen eye to make sure you don’t end up holding any.

That’s because the profits backstopping today’s dividends are slowly drying up.

According to just-released numbers from FactSet, S&P 500 companies will report a 2.1% year-over-year earnings decline in the third quarter. If that prediction holds up, this will be the sixth straight quarter of declines. That’s even longer than the five-quarter streak we saw during the financial crisis!

And get this: right now, 44 S&P 500 companies have payout ratios (or the percentage of earnings going out the door as dividends) above 100%. That’s the largest number in at least a decade. Unless these 44 laggards find a way to turn the ship around, their shareholders will end up with a nasty chop to their income—and a shriveled share price, too.

Here are three blue-chip dividends I’d be worried about if I held them:

Caterpillar (CAT): As I wrote last week, I’d stay clear of CAT right now, due to its exploding 164% payout ratio and falling earnings, two things you’d never guess just by looking at the above-average 3.7% yield. If resource prices (and equipment demand) don’t turn soon, this payout could get buried.

Western Digital (WDC) yields 3.6% today, up from 2.5% a year ago. Too bad it pays out 192% of its earnings as dividends, and the payout’s been frozen for a year and a half. I’m betting its next direction is down, and soon.

Frontier Communications (FTR): I hope you unloaded Frontier when I recommended doing so back in March. Since then, the stock has dropped 20%, pushing its already-high 7.9% yield all the way up to  9.9% today. And the trap could be about to spring: FTR now has a negative payout ratio, meaning it’s losing money while still paying out a dividend. If you’re still holding onto this one, dump it right away.

That brings me back to the undervalued dividend growers I mentioned earlier. All three have a high current yield and/or a record of fast dividend growth, backed by healthy businesses and, yes, ultra-safe payout ratios.

General Motors (GM) boasts a 4.7% yield and has hiked its payout by 27% over the past two years. The yield has also risen due to a 5% year-to-date drop in the share price, but that’s the result of overblown worries that the auto boom will stall.

Why do I say overblown? Because even when interest rates do move up, it won’t be nearly fast enough to derail car sales. A sub-5% unemployment rate and higher consumer spending will also keep sales rolling.

Meantime, GM’s earnings have streaked higher in recent years, pushing the payout ratio down to 18.8%, so this dividend is safe no matter what. 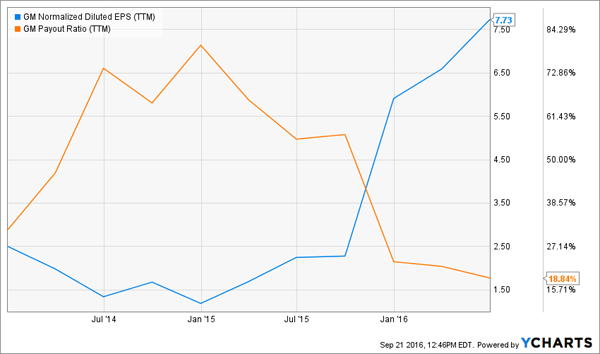 And even if sales do level off, management is setting itself up for higher profits down the road regardless, through smart moves like cutting sales to rental fleets, which buy cars at a discount then sell them a year later, when they compete with new models.

The kicker? GM sports a ridiculously low forward price-to-earnings (P/E) ratio of 5.6. You won’t find many deals like that in today’s market.

Comcast Corp. (CMCSA) has been dealing with a similar dark cloud as GM—in this case, worries about cord cutting, or customers ditching cable for streaming services like Netflix (NFLX).

In the second quarter, the cable provider did shed 4,000 video customers, but that’s typical as students disconnect and head home. The real surprise was that this was the best second-quarter result since 10 years ago, when cord cutting didn’t even exist.

The company is holding on to the cord cutters through discount bundles of home phone, cable and Internet. And that package is about to get stickier: Comcast now plans to enter the wireless game, using its own Wi-Fi hotspots and rented network space from Verizon (VZ).

The stock yields just 1.6%, but the dividend has more than doubled in the last five years—so if you’d bought back then, you’d be yielding a tidy 4.8% on your original investment today. 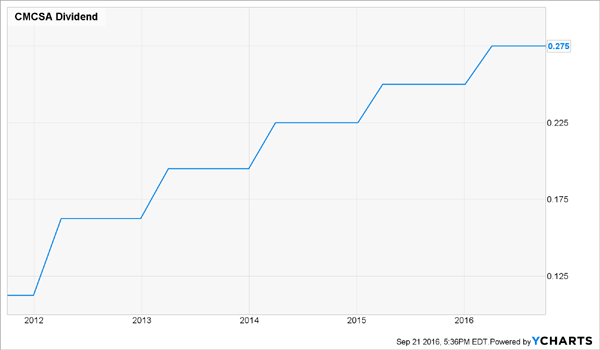 With earnings, revenue and operating cash flow all headed higher—not to mention a payout ratio of just 31%—there will be plenty more dividend hikes ahead. That makes Comcast more than worth its forward P/E ratio of 17.4.

Delta Air Lines (DAL) isn’t usually seen as an income play, but management’s working on changing that, having tripled the quarterly payout in the past two years. That’s helped drive the trailing-twelve-month yield up to 1.6% from 0.7%, yet Delta still pays out just 9% of its earnings as dividends.

The yield has also risen because the stock has dropped 25% this year, plagued by fears of terrorist attacks, fallout from the Brexit vote and concern about overcapacity in the airline industry.

But here’s what most investors have missed: in the last 12 years, the airline business has seen massive consolidation that’s slashed the number of domestic carriers from 12 to just four.

That’s put an end to crippling price wars and lets the industry better control the ratio of passengers to available seats. Just a couple weeks ago, for example, Southwest Airlines (LUV) said it would hold its capacity expansion to less than 4% next year, down from 6% in 2016.

These Yields Are 5 Times Bigger Than Delta’s

Delta, GM and Comcast are great buys now, but even with their strong dividend growth, it will still be years before an investment today would match the 7.6% and 7.7% yields you’ll pocket from two investments I’ve just uncovered.

Like the three stocks above, they get far less attention than they deserve—right now, they’re trading at 10% to 15% discounts to their true value.

That makes them great picks for your retirement portfolio because, as I just showed you when we discussed Delta’s unbelievably low valuation, it limits your downside risk … and gives you plenty of upside as more bargain-hunters snap up the shares.

This is why I’ve made these two under-the-radar income plays the cornerstones of my “no-withdrawal” retirement-portfolio strategy. Why rely on stock price appreciation in an inflated market when there are secure, high-paying dividends you can simply live off of and keep your capital intact?

Most investors know this is the right approach to retirement. Problem is, they don’t know how to find 7% and 8% yields to fund their lives.

That’s why I specialize in finding safe, under-the-radar high-income opportunities. Click here and I’ll explain more about my no withdrawal approach—plus I’ll share the names and tickers of my two favorite investments for 7.6% and 7.7% yields.