Most investors think it’s a good thing to be long alongside the “Big Money.” But professionals’ favorites are actually the riskiest stocks you could own. Let me explain why – and share three beloved names you should sell today.

Ten days ago, Barron’s published its latest Big Money poll, where money managers shared their top stocks for the next 12 months. Three “digital utilities” were particularly popular, and why not? All three had reasonable valuations, strong cash flows and of course healthy dividends.

Last week, two reported earnings – and both got clobbered. Here’s how they’ve performed since their Barron’s love letter: 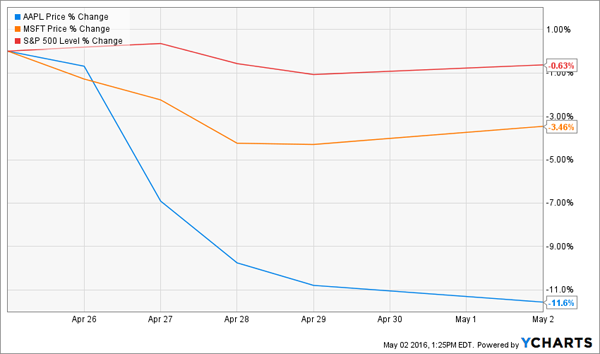 The beauty of an earnings report – and really any “news” a company reports – is in the eye of the beholder. The Big Money types universally loved Apple (AAPL), with 80% of respondents voting bullish. Wall Street’s analysts were big fans too, with 28 of the 37 that cover Apple rating its stock a Buy.

Unfortunately for them, Chinese consumers didn’t feel the same level of affection. So these expert managers and analysts found themselves reexamining their own fondness at the same moment. And their #1 favorite position dropped 11.6% in just six trading days.

Last week we talked about analyst ratings as a reliable contrarian indicator. Apple had the double whammy of analyst AND manager love, and it led to double-digit losses!

Microsoft (MSFT), one of only two companies left with a credit rating of AAA from S&P, was another Big Money favorite. The software giant lowered its revenue guidance and lost 3.5% last week.

Who’s next on the chopping block? Cisco (CSCO) has quietly become a cult favorite with income fans by tripling its dividend over the last five years. The Big Money likes its healthy 3.8% yield.

Problem is, Cisco’s sales are flattening out. And with a 41% payout ratio, its days of big dividend growth are probably behind it. The company reports earnings on May 18 – and I wouldn’t want to hold it going into this date.

Use the News… To Gauge the Second-Level Reaction

Billionaire Howard Marks – the smartest money manager most investors have never heard of – swears by “second-level thinking.” He says that first-level types stop at musing, “It’s a good company let’s buy the stock…”

But second-level thinkers then reason, “It’s a good company, but everyone thinks it’s a great company, and it’s not. So the stock’s overrated and overpriced; let’s sell.”

Apple and Microsoft were overrated and overpriced, and probably still are. Investors were attracted by their dividends, but a “two-something” yield isn’t  enough to protect a share price.

Their stocks reacted poorly to bad news, and it takes time for sentiment to swing all the way in the opposite direction. These two should be sold and avoided until at least 2017, and the same will go for Cisco if it behaves poorly post-earnings.

Of course not all expert favorites are sells. A couple of other Big Money favorites made it to the other side of their earnings reports intact.

Exxon Mobil (XOM) climbed 1.8% in a span that included its first credit downgrade since 1949. (But then again, analysts don’t like Exxon).

Chemical maker Huntsman (HUN) was perhaps the most impressive – it traded flat through last Thursday’s announcement that the company’s revenues were short of analyst expectations. It helps to have one-third the analyst coverage of the mega-caps.

Fade is Good, But “Off Radar” is Even Better

Fading the Big Money and analyst crowd is a good strategy, but you’ll do even better buying issues that are off Wall Street’s collective radar screens. It’s the Huntsman effect on steroids – when only a handful of analysts cover a stock, it’s more likely to be mispriced. Which means you can buy these issues cheaper, collect higher yields and wait for price appreciation as new analysts come knocking.

These are, without a doubt, the best deals on the board today. Overall, the stock market is relatively expensive. But some reliable dividend stocks are so cheap thanks to their relative obscurity that you can actually bank payouts that are double the tech yields that professionals are fawning over.

Using Marks’ second-level methodology, I found three second-level stocks paying 7.5% dividends or better that are all poised to double in the years ahead. They have limited analyst coverage right now, which makes right now the best time to buy them. Click here and I’ll share the details on these companies, including their names and tickers.