Don’t Sell in May: Buy These 4 Dividend Growers Instead

If you “sell in May and go away” this year, you could be putting a whole year’s worth of returns at risk.

Now is the time to be adding top-notch dividend stocks to your portfolio. I’ll give you four my “second-level analysis” has uncovered in a moment.

First, here’s why “sell in May” is a flawed strategy that could cost you money.

True, stocks typically struggle in the summer months: since 1950, the Dow Jones Industrial Average has gained an average of 0.4% from May through October, according to the Stock Trader’s Almanac, compared to a 7.5% rise from November through April.

But jumping out of the market only to jump back in six months later is still a terrible idea. For one, you’ll miss out on dividends, which make up a big part of most investors’ long-term returns. And even at a 0.4% gain, you’d still be doing better than sitting in cash.

4 Dividends About to Get Bigger

You’re better off using the summer months to fine-tune your portfolio, swapping out second-rate stocks (especially if they don’t pay dividends) for top-notch dividend-growers like the four below.

Even better, all four are poised to announce big dividend hikes, which should give their share prices a nice boost—seasonality or not.

American Express (AXP) may have a fan in Warren Buffett—Berkshire Hathaway (BRK.A) is the credit-card giant’s biggest investor—but other partners have been happy to leave home without it, including Costco Wholesale (COST) and JetBlue Airways (JBLU), which have both ended their exclusive deals with AmEx.

But a funny thing happened on the way to AmEx’s funeral: despite its very bad year, the company reported first-quarter earnings per share (EPS) just 2% lower than a year ago on a 2% rise in revenue. Both numbers were well ahead of forecasts.

And even if it takes longer than expected to replace the Costco business, you can bank on the $0.29 quarterly dividend, which yields 1.8% and is up 61% in the past five years. Barron’s recently predicted a 17% hike, likely to be announced in early- to mid-May, and that looks like a slam-dunk, thanks to AmEx’s low 23% payout ratio (or the percentage of earnings paid out as dividends). 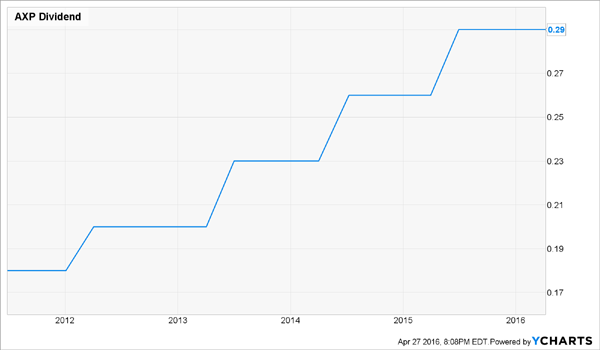 Meantime, pessimism following the Costco debacle has put AXP on sale: shares trade at 12.2 times forecast earnings in the next 12 months, below their five-year average of 14.1. That gives them 17% upside if they simply revert back to their regular level.

FedEx Corp. (FDX) yields just 0.6% but has finally upped its dividend-growth game: after years of $0.01 annual increases, the shipper boosted its quarterly payout by 33% in 2014, followed by a 25% jump last year.

As I wrote recently, I see the company announcing at least a 20% dividend hike in June. A low 35% payout ratio and higher profits will drive that truck: FedEx is calling for a 20% to 22% earnings increase this year, thanks in part to its cost-cutting program. A weaker greenback and more online shopping will provide further tailwinds.

Now for the third act: a big dividend hike that’s all but certain in late May. How big? Last May’s boost came in at 14%, and I expect a similar rise this time around. The defense contractor certainly has the room, thanks to its 29.4% payout ratio and soaring earnings. The stock yields 1.6%. 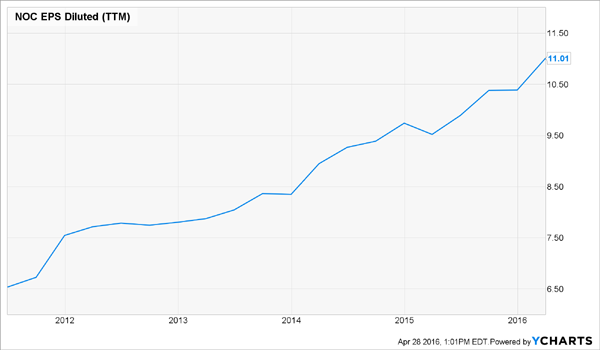 Shares are pushing the envelope at 19.7 times forward earnings, but consider this: whether Hillary Clinton or a Republican wins the election, they’ll be more hawkish than Barack Obama, and that means higher defense spending ahead.

Target Corp. (TGT) yields a tidy 2.7% and announced its last dividend hike in June of last year, when it boosted the payout by 7.7%. As with Northrop, I expect a similar rise this June—but I see bigger dividend growth ahead.

Why? Because Target’s making big investments in two key areas: e-commerce and its employees. It recently said it would boost salaries to a minimum of $10 an hour, after raising them to $9 from the federal minimum wage of $7.25 in April 2015. That will take a bite out of its earnings, but it will pay off in the long run by cutting costly turnover and attracting better workers.

Meantime, online sales are booming, soaring 34% in the latest quarter and topping $1 billion for the first time ever. The company’s plan to spend $1.8 billion on upgrades this year, mainly in e-commerce, and at least $2 billion next year, will keep that growth coming. The shares are also reasonably valued at 15.9 times forward earnings.

This “Billionaire’s Secret” Is Flashing 3 Buys This May

Forget trying to play the calendar for profits. Instead, let me show you the simple system I’ve used to find stocks delivering 6%, 7%, even 8% dividends and plenty of double-digit gains, too.

It comes from a little-known billionaire money manager who’s one of the brightest minds on Wall Street. If you haven’t heard of him, don’t worry. Few investors have.

But his track record speaks for itself: his firm has averaged 19.9% annualized gains over the past 20 years, and his approach has won plaudits from Joel Greenblatt, Seth Klarman—and even Warren Buffett himself.

Make no mistake, this “billionaire’s secret” can double your dividend income overnight. And before you ask, no, it doesn’t involve options trading, and there are no tricky tax issues to deal with. It’s simply a methodology for buying and holding the right stocks at the right time.

It recently turned up three stocks paying 7.5% dividends or better, and they’re all poised to rack up 15%+ gains before the year is out. Just a few analysts cover them, which makes now the best time to buy.

Click here and I’ll give you these companies’ names and ticker symbols and show you exactly how I found them.