There are reasons to feel confident about this hypothesis. Mortgage delinquency rates are falling significantly, according to data from the Federal Reserve. Back in the first quarter of 2010, delinquencies on single-family mortgages peaked at 11.26% – they’ve declined steadily since, and are quickly approaching 5%. 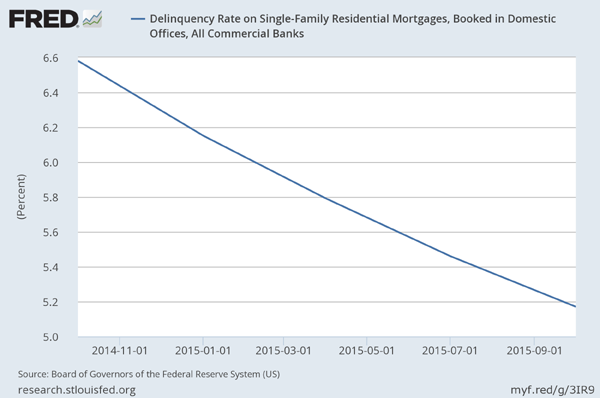 Several analysts believe that on-time mortgage payments will continue to improve. Delinquencies are still high by historic standards – throughout most of the 1990s and in the 2000s, defaults stayed below 3%.

And according to the S&P/Experian First Mortgage Default index, mortgage delinquencies have fallen another 8.3% in the first-quarter of 2016. Banks simply don’t give out subprime mortgages like they used to, and as a result, more and more loans are getting paid on time.

Investors plagued with recency bias are still scared of the mortgage-backed securities (MBS) that had the star role in “The Big Short.” But savvier investors know that there are significant headwinds for the mortgage market and enough political will behind making sure nothing like 2008 will ever happen again. Plus, banks are still strict in demanding income verification, big down payments, and high credit scores for applicants, meaning mortgage risks are likely to keep falling.

So, how can we profit on this trend?

Buying Mortgages at Scale for Income

There are two ways of doing this. One is to buy bond funds that buy MBS, collect the interest payments, and distribute those to shareholders. Two Pimco funds focus mostly on these assets. The first is Pimco Dynamic Credit Income Fund (PCI), one of the largest closed-end funds (CEFs) on the market. The other, Pimco Dynamic Income Fund (PDI), is a little newer, a little smaller, but also has a killer dividend history.  These funds also buy some corporate bonds for further diversification.

Or you can buy mREITs—Real Estate Investment Trusts that buy mortgages from originating banks and collect interest payments from debtors. Investors in mREITs receive most of this interest in the form of dividends.

The counterparts to PCI and PDI worth your attention are: Annaly Capital Management (NLY), American Capital Agency Corp (AGNC) and American Capital Mortgage Investment (MTGE). AGNC and MTGE share management teams, but that doesn’t mean their performance, or their value to buyers today, is similar.

One of the nice things about these funds is their juicy, double-digit dividend yields. Because of their big yields, just looking at their stock price returns is misleading. We need to look at total returns, which includes dividend payouts.

The rap on mortgage stocks and funds is that you don’t want to own them as rates rise, because their portfolios lose value with each uptick. However over the past year, this group has performed pretty well as a class:

Shrugging Off the Fed’s First Hike 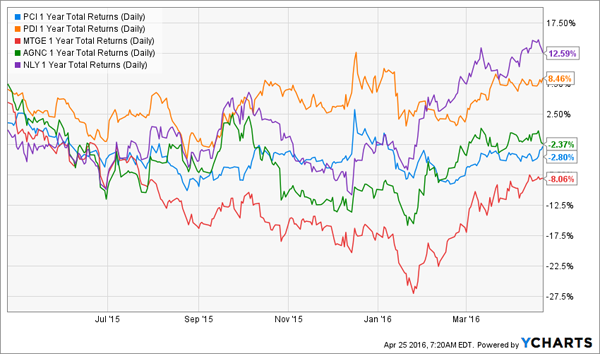 NLY and PDI are up over the past year –both handily beat the S&P 500’s 1.4% total return. AGNC and PCI are slightly behind the market, but the surprising takeaway from this is that mREITs have held their own despite expectations that interest rate hikes are not over. In reality, the rate hike cycle remains a gentle one, meaning mREITs should continue to perform fine.

The real standout is MTGE, whose stock price is down 20% since inception and whose dividends have shrunk 55% from their peak in 2012.

Does this mean we should avoid MTGE and buy the others? Actually, no – I’m worried about dividend funding for one of the other issues.

Let’s look underneath the hood on these funds by focusing on one key metric: dividend coverage. Each issue earns a certain amount of income from its investments, which will vary over time. Meanwhile, management also pays out dividends that are usually fixed at a certain amount and cadence.

The problem here is that sometimes funds will establish a dividend yield that is greater than the yield they are getting from their investments. When that happens, their dividend coverage falls below 100% and usually means the fund will be forced to cut its dividend soon, or start returning capital to shareholders that will inevitably shrink the fund until it’s gone.

On this front, every one of our mortgage plays is doing quite well, except for AGNC.

MTGE had the best dividend coverage over the last 12 months, with investment income in the last year accounting for 124% of dividends to be paid over the next 12 months. This is partly thanks to a 20% dividend cut in July—the fifth time the fund has cut dividends, and probably not the last. Close behind and with no dividend cuts to date is PDI, while PCI also has positive dividend coverage and no history of cuts.

Looking at these funds, it’s clear that PDI and PCI offer great yields and sustainable payouts, making them clear buys to bet on housing. Additionally, NLY’s strong historical performance and high dividend coverage make it a great mREIT option for a high yield portfolio—but don’t prepare to hold it for a long time, as inevitable dividend cuts will force the fund to fall at some point.

What will cause that dividend cut? Because mREITs borrow money to buy the mortgage bonds that they invest in, raising rates cut their margins and inevitably cause income to fall. Additionally, falling rates mean the fund’s income from mortgages will go down, as they earn income at a lower interest rate than they used to. Since both hurt mREITs, you cannot expect today’s mREIT dividend rate to last forever.

Investors should be compensated for this eventuality with higher yields, but MTGE’s yield is actually lower than PCI’s and only marginally above PDI’s (although, since PDI has a strong track record of paying dividends, its yield will probably end up being lower by the end of the year). While AGNC does compensate this with a higher yield near 13%, it’s absurd lack of dividend coverage means steep cuts are likely in the short term.

Rather than sweating out mortgage-related dividend payments one Fed meeting at a time, I prefer to invest in surer income plays that will keep paying no matter what Yellen & Co. decide to do.

There’s a billionaire investor who you probably have never heard of – he employs a “second-level investing” approach that I’ve adopted to identify contrarian income opportunities of my own. Right now I have three favorites that are paying 7.5% yields and higher. These payouts are secure no matter what the Fed does, plus each stock has 15% upside.

One was mentioned in Barron’s last weekend, so the best time to buy them is now – before Wall Street comes running and bids their prices up. Click here and for details on this little-known strategy, along with the names and tickers of my very best income plays.