The buy-the-headline crowd is at it again. This time, they’re dumping real estate investment trusts (REITs) based on a small uptick in 10-year bond yields.

As is often the case, the jump had the opposite effect on REITs. Here’s how the Vanguard REIT Index ETF (VNQ), my favorite REIT ETF and a good proxy for the sector, has performed in the past week: 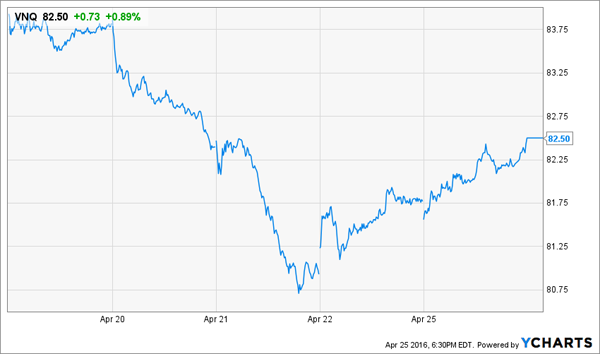 Why the decline? Investors are worried rising rates will make REITs less attractive, as yields on so-called “safe” investments like Treasuries shoot higher. But even if the Fed does as most traders expect and hikes rates one to two times this year (I think it will be more like once or not at all), it will still be a long time before Treasuries rival REITs yielding 4% and up.

A Second Chance to Profit

This selloff reminds me of the panic we saw last November, when Treasury yields went as high as 2.34% and REITs also took a hit. That’s when I pounded the table on Medical Properties Trust (MPW), a REIT that loans money to hospital operators, because of its smart business model, 7.6% dividend yield and rising funds from operations (FFO), a better measure of REIT performance than earnings.

Since then, my Contrarian Income Report readers are sitting on a 23% return, including dividends. Medical Properties is now above my buy price, so I’d wait for a further pullback before jumping in. Meantime, here are three more strong REITs trading at attractive levels.

Let the Boomers’ Retirement Fund Yours …

The REIT’s assets are well-positioned to profit as baby boomers age (more on that in a moment): 61% of its 1,282 properties are seniors’ housing communities, while another 67 are skilled nursing facilities, which provide the highest level of care a person can get while still living independently.

Meantime, shares yield 4.8%, or more than double the S&P 500 average, and Ventas has boosted its payout at an average annual rate of 8.4% in the past decade—a pace few REITs can match.

… While You Profit From Millennials

The trust recently finished selling $6 billion of non-core assets, leaving it with 316 properties in some of the country’s tightest rental markets, including Boston, New York, Seattle and San Francisco. In New York, average monthly rent for a one-bedroom apartment hit $3,932 in February, up 6% from February 2015.

In addition to its regular payout, Equity Residential has a history of special dividends, including an $8 payout in February, plus it’s hiked its quarterly dividend by 49% in the last five years. With many millennials putting off home ownership, you can expect those payouts to keep rising.

It’s true that Amazon.com (AMZN) is battering brick-and-mortar retailers, but that’s not slowing growth at DDR Corp. (DDR). The REIT owns 352 open-air shopping centers, with a total of 113 million square feet in 37 states.

DDR’s units have seesawed in the last week: they currently trade at 14.3 times trailing-twelve-month FFO, which is actually up slightly from 13.6 at the start of the year. But that’s still fair in light of the REIT’s broad geographic base and conservative business model: 74% of its square footage is in malls anchored by grocery stores, a business the Internet has yet to severely disrupt.

Food retailers, in turn, draw in steady foot traffic, which is part of the secret behind the REIT’s 95.6% occupancy rate and the fact that it’s boosted rent per square foot at a compound annual rate of 4.3% since 2011. Higher rents have helped drive the payout up nearly fivefold since then. The units yield a tidy 4.3%. 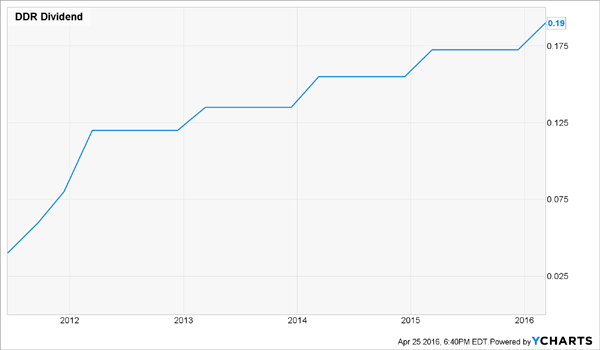 And even if results do hit a rough patch, you’ve got an extra margin of safety thanks to the firm’s payout ratio of 62% of FFO (quite low for a REIT).

Residential and retail REITs have great potential, but if you want the fastest dividend growth and capital appreciation, healthcare REITs are where you want to be.

That’s because 77 million baby boomers are poised to tip over into retirement age, causing the 65+ population to double in the coming years.

This America-is-getting-older trend is nothing less than the biggest demographic shift in our country’s history, and it’s pushing healthcare spending through the roof—to an expected $5.4 trillion in 2024.

Best of all, all three have been pulled down in the recent interest-rate-hike-panic, making now a perfect time to buy. But they won’t be available at these bargain levels for long.

Don’t miss out. Click here to get the names and tickers of all three of these companies, along with my complete analysis of each one.