The 2 Best Dividend Stocks For Your Retirement Portfolio

Investors, spooked by the massacre of 2008 and the market’s latest gyrations, are making the same mistake again. They’re running scared into so-called “safe” fixed-income investments like CDs and treasuries—and ignoring stocks altogether.

A recent survey by Franklin Templeton found that 37% of long-term investors thought they’d be just fine leaving stocks out of their retirement portfolios. For investors in their 20s and 30s, that number jumps to 56%.

That’s a big mistake—unless these folks are incredibly wealthy, they’re not going to be able to enjoy retirement in financial comfort. If your nest egg doesn’t have a big allocation to equities, read on and I’ll break down the best dividend stocks for you to consider today.

Because You Need to Beat Inflation

Sure, fixed-income investments do preserve your capital. But they’re far from safe. That’s because the returns they generate are so pitiful that leaning too heavily on them invites another risk: that you’ll outlive your money in retirement.

Just look at the typical return on a one-year CD—1.25%. Inflation may be low today, but even at 2% or so, your so-called “safe” return is actually a loss. And that’s without any extra interest to pay your living expenses!

Meantime we’re living longer than ever, with today’s 65-year-olds having roughly 50/50 odds of making it to 85, while married couples stand a 75% chance of at least one spouse living that long.

To generate the income you need to stay ahead of inflation over a 20+ year span like that, there’s really only one option: stocks that not only pay dividends but grow them—and I’m not talking about wimpy $0.01-a-year hikes like AT&T (T) offers.

Dodging the Next Kinder Morgan

Above all, you need to avoid stagnant payouts, or worse, surprise dividend cuts. On that note, I hope you weren’t holding Kinder Morgan (KMI) in December, when it gave investors a nasty Christmas present: a 75% slash to its payout. Not only that, the chop came just two months after the company announced a 4% hike and projected its dividend would rise 6% to 10% this year.

Below are three other supposedly safe dividends that could easily go the way of Kinder. If you hold them in your retirement portfolio, I suggest dumping them immediately. Further on, I’ll show you two more income plays that are far better options for funding your golden years.

Sysco (SYY) yields 2.7%, which is only slightly higher than the average S&P 500 stock. But plenty of investors are pulled in by another figure: 45, the number of consecutive years the foodservice supplier has hiked its payout.

But here’s the problem: in the past five years, Sysco’s earnings per share (EPS) have fallen 41.8%, and its payout ratio, or the percentage of profits it’s shoveling out the door as dividends, has climbed to 92%. What’s more, Sysco has only been raising the quarterly payout by $0.01 a year since 2009—just enough to keep the streak alive.

Investors are betting that Sysco’s latest cost cuts and acquisitions will turn the ship around, paying 22 times forward earnings, well above the company’s five-year average of 18.1. That implies an 18% drop from here if Sysco fails to meet those expectations and simply reverts to its average five-year forward P/E. 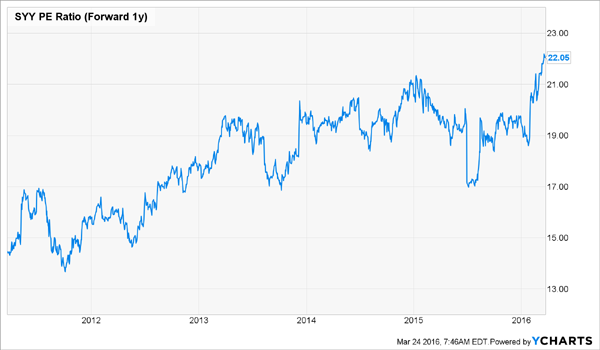 Kimberly-Clark (KMB) is another retirement-portfolio favorite whose payout I’d be worried about if I held the stock. It has a lot in common with Sysco, including a similar current yield (2.8%) and a long history of dividend hikes: 43 straight years.

So what’s the worry? KMB’s payout ratio is even worse than Sysco’s: 126%! You read that right: Kimberly-Clark is paying out more in dividends than it earns.

KMB will need a big earnings pickup to reel in that payout ratio, a tall order in the slow-growing personal-care-products business. In fact, the company’s own outlook calls for a 3% sales decline this year, and just a 3% to 7% rise in adjusted earnings.

HCP, Inc. (HCP) is a healthcare real estate investment trust (REIT). It boasts a 7.3% dividend yield and seems to have everything going for it: HCP operates skilled nursing facilities, and right now there are 77 million baby boomers just starting to retire. (More on my favorite way to play this massive trend in a moment.)

HCP rents out space to various tenants, but in 2015, just two operators supplied 33% of its revenue, and they’re both struggling. HCP cut the rent it charges one of these firms, HCR ManorCare, in April 2015, raising the possibility that another chop could be in the cards.

The REIT is working on diversifying its business, but the fact that management let itself get into such a situation, in part by purchasing a share of HCR ManorCare in 2011, doesn’t inspire my confidence.

Apple Inc. (AAPL)—a tech stock with just a 2.0% yield—may seem an odd choice for a retirement portfolio, but hear me out.

For one, as I’ve written before, it’s dividend growth, not current yield, that counts, and here, the iPhone maker is tough to top. Since it started paying dividends less than four years ago, it’s hiked its payout by an inflation-busting 37% (adjusted for a 7-for-1 stock split in June 2014). 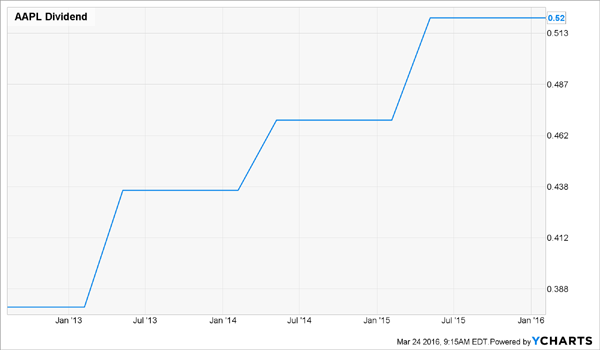 And don’t forget Apple’s share buybacks, which have cut its share count by 15.5% in the same time period. Apple can easily afford to keep rewarding shareholders, thanks to its microscopic 22% payout ratio and legendary $216-billion cash hoard. Meantime, the stock trades at just 10.6 times forward earnings.

Whether you’re planning for retirement or well into your golden years, you’ll love my top pick now. It yields a gaudy 6.8% and benefits from the same ironclad demographic shift HCP does—but carries none of the risks.

In fact, its share price is cheap right now—trading for less than 10-times cash flow —thanks to HCP’s recent blunders.

Best thing is, this firm, my favorite dividend grower, raises its payout not just every year, but every single quarter. If you buy shares today, you’ll be earning a 10%+ cash yield on your initial investment in no time.

This firm provides direct nursing care to an elderly population that’s exploding. And that trend is set in stone, no matter what happens to the price of oil, the outcome of this year’s election, or even China or the Fed.

The greying of America is fueling skyrocketing demand for healthcare services: by 2024, national healthcare expenditures will climb to $5.43 trillion, or about 20% of GDP.

This firm is capitalizing on this trend, and it’s growing its already-big 6.8% dividend literally every 3 months. Plus, thanks to its bargain valuation, the stock has easy 20% upside from here, or better.