As we approach tax time, many investors open their brokerages statements for the first time in a year. Those that “outsourced” their investing decisions to fund managers are often disappointed. On the whole, these vehicles tend to underperform the broader market.

Of course there are exceptions. For example, the Vanguard High Dividend Yield ETF (VYM) has outperformed the S&P 500 over the past five years (83.4% cumulatively versus 81.6%). It pays a 3.4% yield today, which is certainly better than the S&P’s paltry 2.1% payout.

But VYM can leave you holding an unexpected tax bill this time of year. Even if you didn’t sell your shares of the fund in 2015, its realized gains can be passed onto you. The IRS doesn’t care if you yourself sold shares in the fund – it watches to see if the portfolio managers sold their holdings for profits during the year.

To control your tax situation, avoid management fees, collect your own dividend checks, AND beat the market, here’s a better idea – cherry pick and buy the best issues yourself. After all, it’s easy for you to beat VYM and S&P with a little bit of stock curation.

In fact, we can do this simply by shopping from VYM’s top six holdings. We’ll buy five, and pass on the sixth.

Five Blue Chip Dividends to Buy, One to Sell

Microsoft Corporation (MSFT) is still the undisputed champion of business software. Apple gets all the attention for its sexy products and FBI privacy fights, but Microsoft a “boring” tech utility that just prints money.

Investors have enjoyed 151% gains over the past five years. During that time the company has raised its dividend five times for a total increase of 125%. 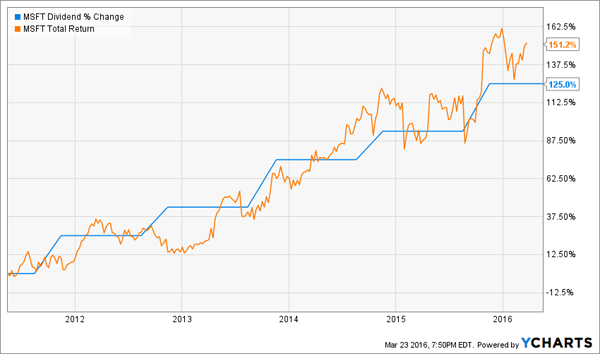 Microsoft is aggressively rolling out Windows 10 to great reviews. This keeps the cash machine running and gives Microsoft time to figure out its next big product line outside the Xbox.

Exxon Mobil Corporation (XOM) is the world’s largest oil and gas company. Despite the recent plunge in oil profits, XOM has maintained its dividend and is financial stability.

The advantage of a mega-cap like Exxon – worth almost $350 billion – is that it has the financial resources and lines of credit to ride out almost any storm. Even better, its position of financial strength means that management can bargain shop and buy out underfunded competition.

But as I’ve written many times, the oil industry is a mess with today’s cheap crude. If you insist on buying one, buy Exxon. Personally, I’d wait – you’ll have an opportunity to buy this stock for cheaper later on.

General Electric Company (GE) is a multifaceted conglomerate broken down into eight divisions: Power & Water, Oil & Gas, Energy Management, Aviation, Healthcare, Transportation, Appliances & Lighting and GE Capital. Each is huge – if any of the eight were spun out, they would all be listed on the S&P 500.

General Electric has been deleveraging itself since the financial crisis. Its GE Capital division got into trouble along with the other big financials. Less finance will help its stock price because industrial companies are awarded higher stock multiples.

GE pays 3% today and holds $7.59 in cash per share – almost a third of its share price. That’s seven years worth of dividends in the bank today.

Wells Fargo & Co. (WFC): Warren Buffett’s favorite bank has been on the top of my “hold forever” list. Since the financial crisis, it’s hiked its payout by 650%. It also boasts a payout ratio of just 35.3%, so there’s lots of room for growth from current 3% levels.

Wells will profit from rising interest rates – it has more loans on the books than any other bank. As it earns more interest than it pays out, this widening spread will drop right to the bottom line. 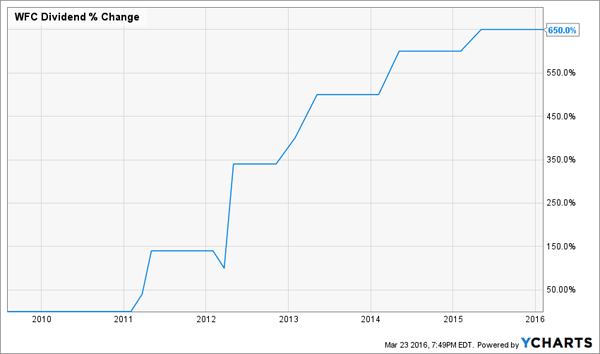 Any growth is very bullish for the stock because management loves to reward shareholders. Over the past five years, the company has returned 100% of its free cash flow to shareholders. The stock pays the highest dividend of our group at 5%.

Finally Johnson & Johnson (JNJ) is a healthcare company with a ton of products. Its diverse operations consist of three segments: consumer (about 20% of revenue), pharmaceutical (45%) and medical devices (35%).

Shares currently pay 2.8%.  JNJ is as close to dividend royalty as there is. The company has raised its payout for 53 straight years, or more than twice what it needed to snag a spot on the S&P 500 Dividend Aristocrats list. Over the past decade the company has hiked dividends 270%.

As much as I like JNJ, it’s stock is a bit expensive trading at nearly 20-times earnings. I prefer another healthcare dividend machine that’s trading for less than 10-times annual cash flow.

Why so cheap? Because it doesn’t have the brand name recognition of JNJ, so it doesn’t get the Wall Street analyst attention. This “hidden gem” status is a great thing for shareholders – the firm’s dividend is 6.6%, more than triple JNJ’s!

Plus, this company actually raises its dividend four-times as often as JNJ. Management literally bumps its payout every quarter. Over the last decade, it’s more than doubled its dividend – which means, in just a few years, you’ll be earning a 10% cash yield or better on your initial capital.

I’d love to share the details on this stock with you, along with two more undercover healthcare gems that have even higher payouts. Click here and I’ll explain more.