Real estate investment trusts (REITs) are a more reliable source of income than many comparable high yielding stocks in volatile sectors like energy. That’s because REITs are legally required to hand over the bulk of their income to investors. This unique structure, which is the result of legislature from the 1960s, makes REITs an attractive addition to an income-producing portfolio.

The five biggest REITs pay an average yield of nearly 3%. These dividends are secure, and growing thanks to expanded operations and improving profitability. Some of them have lost favor in recent months, and although they have recovered a bit from recent 52-week lows, they still remain affordable buys today.

Each firm has increased its dividends in the past year, and EQR even paid a large special dividend of $8 in February after selling off $6 billion in assets.

These large cap, diversified companies own hundreds of properties each. The can quickly pivot to more profitable operations and move away from operations that have less growth potential.

A good example of this is EQR’s recent sale of non-core assets. The company’s $6 billion liquidation was a strategic move to sell off assets at a high price thanks to rising real estate prices and still maintain company’s main income stream. EQR President and CEO David J. Neithercut explains:

“We had a tremendously successful execution on the sale of more than $6 billion of non-core assets, which produced an unlevered internal rate of return of 11.3%, and are pleased to deliver much of the proceeds from these sales to our shareholders on a leverage neutral basis. We can now focus solely on our strategy of owning, building and operating assets in coastal gateway cities in higher density urban locations with close proximity to public transportation, job centers and other amenities that these cities have to offer.”

In a world where 10-year Treasuries pay less than 2% and bond king Bill Gross warns that junk bond yields are too low to offer an attractive return, an 11.3% rate of return is incredible.

Similarly, AMT’s 40,000+ wireless towers generate big profits. The company’s gross profit has remained around 73% of revenues for the last four years, and the company’s expanding operations are locking in sales and income growth for the foreseeable future.

This month, the company announced it’s investing $2 billion in towers in India, a country of 1.25 billion people where 80% are using a mobile phone. With 5% GDP growth, that number is likely to grow as the country’s middle class expands.

Investors have slowly begun to realize they’ve been underpricing AMT’s steady dividend growth. It’s trounced the S&P 500 without even taking its ever-rising dividends into consideration.

AMT Boosts Its Payout Every Quarter 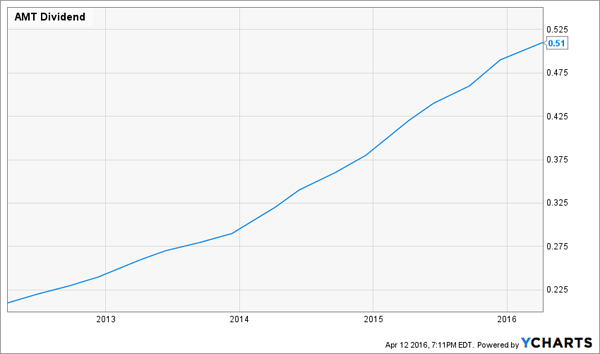 Competitor CCI likewise trades for 20-times funds from operations (FFO) and has a history of aggressively boosting its dividend as well. 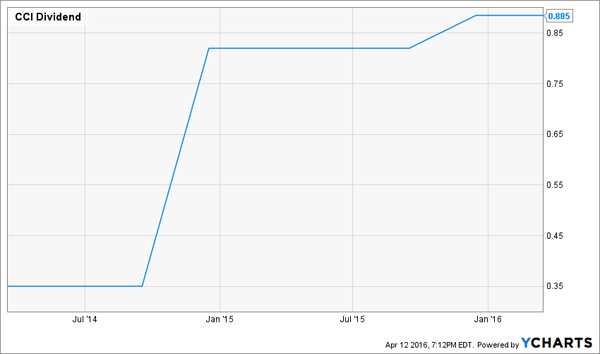 EQR is down 9% year-to-date because of its asset sale. That’s brought the company’s yield up to 2.7%. And rents keep going up in America, driving ever-higher dividend payments for EQR.

For example, Seattle rents went up 5.4% on a year-over-year basis, according to the National Apartment List Rent Report. EQR has 33 properties in Seattle.

Turning to SPG, its stock price has rallied this year thanks to a couple of good pieces of news. Firstly, SPG expects its funds from operations (FFO) to rise 9% with base rents up over 4% on a year-over-year basis. The company is also making strategic moves into high-traffic areas, thanks to a deal to buy a mall from MGM Resorts in Las Vegas worth over $1 billion. 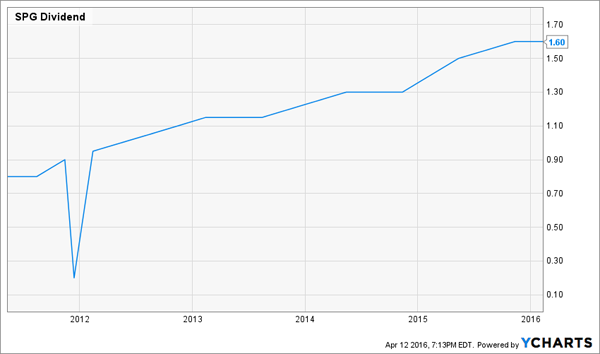 And our best performer for this year thus far is Public Storage. This company has soared in 2016 thanks to an earnings beat and a microscopic debt load (just 3% of its market cap, far behind its peers in the storage REIT business at 40% or higher).

PSA is also much bigger than all other storage REITs, with a portfolio of nearly 2,500 properties that is still growing. On top of that, storage is non-cyclical. These companies don’t generally see a decline in demand when the economy is booming or tanking, making it a low-volatility stock that also pays a nice and reliable dividend.

PSA Benefits From the Storage of More and More “Stuff” 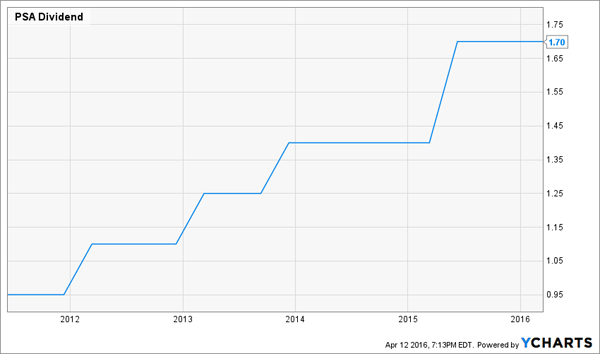 Performance Outlook and A Bonus Pick

A blended portfolio of these five stocks would have handily beaten the S&P 500 with less volatility. Thanks to a higher dividend stream that is set to rise for years, this outperformance should continue. The portfolio also offers appealing diversification and exposure to several growth areas in both cyclical and non-cyclical sectors.

As good as these stocks are, there is one class of REITs that I like even better. With years (actually, decades) of dividend growth ahead, and aggressive expansion plans – thanks to a booming mega trend – these three stocks are set to beat even these five stalwarts.

They’re a bit more “under the radar” than these large cap plays, and as such, they pay higher yields – up to 8.7% to be specific. With annual dividend growth – even quarterly in one firm’s case – you’ll be collecting 10% on your initial capital in no time. Click here for all the details on this trend along with my three favorite REIT plays.