Benjamin Graham, the father of value investing, liked bargains. In The Intelligent Investor, he told investors to look for stock prices at or below 15-times earnings (specifically less than 15X their three year average), and at or below 1.5-times book value.

And like us, he liked dividends. He’d only buy companies that paid dividends for each of the last 20 years prior.

His stringent formula should still outperform the broader market, and keep you out of trouble today. Problem is, it was outlined in 1949. And 67 years later, it’s challenging to find stocks that meet his stringent criteria because equity valuations have been high for the better part of 30 years now.

But Graham Would “Back Up His Truck” For One Sector Today

Thanks to a decade of underperformance, Graham would slam his value truck into reverse – and load it up with high quality bank stocks. 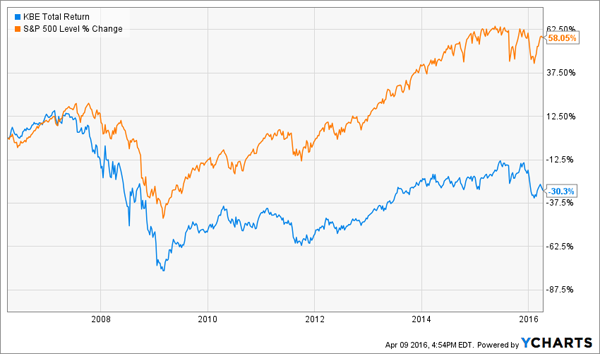 Book value is a particularly accurate valuation metric for banks because most of their assets and liabilities are market to market. It’s often thought of as the bank’s liquidation value. When you buy a bank for book value, it means you’re getting its underlying assets for fair value with the actual businesses tossed in for free. This is the closest thing to a free lunch we’ll ever see on Wall Street.

But even free lunches need to be cashed in, and there’s no guarantee that a stock trading at a discount to “fair value” is going to rise in price anytime soon. A bargain buy is not enough to net a profit – we also need a catalyst to boost shares.

Here, a modified version of Graham’s payout requirement can help. We can strengthen his criterion by adding payout growth to consistency. A cheap stock with a rising dividend stream will rise in price sooner rather than later. Even better if management is buying back its own discounted shares.

4 Firms as Cheap as 70 Cents on the Dollar

Morgan Stanley (MS) trades at just 70% of book value. It’s only been this cheap twice in its 30-year history as a public company – after the financial crisis, and late 2011 into early 2012. You’d have netted returns of roughly 50% and 85% respectively buying those dips.

MS has tripled its dividend over the last two years. Shares pay 2.5% today, and have room to double again thanks to a low 24% payout ratio.

MS is Rarely This Cheap – With Rising Dividend Catalyst 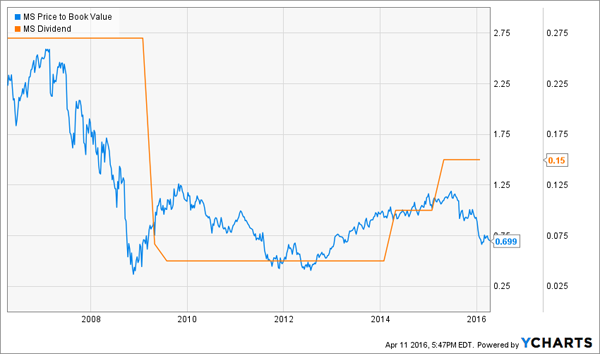 Investors are concerned profit growth will be sluggish for investment banks if rates remain low. But these worries, plus some, are already baked into this bargain share price. Not only is the stock cheaper than book, but it sells for less than 10-times earnings (which analysts believe will keep growing, by the way).

JPMorgan (JPM) traditionally would only sell below book during panics and bear markets. But today, CEO Jamie Dimon finds his stock trading for just 97% of book.

For the last 20 years, buying JPM on dips in price-to-book has been a profitable strategy. Dimon believes it still is – he just bought $26 million in stock with his own money.

A Winning Strategy: Buying JPM on Dips in Price-To-Book 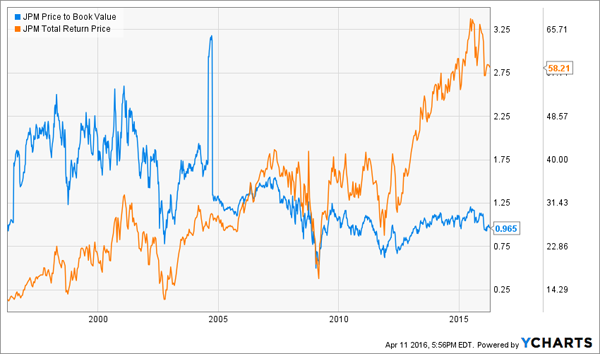 Between its 3% dividend and generous share buybacks, JPM has returned 7.8% of its market cap directly back to shareholders over the past 12 months. And the board just authorized another $1.9 billion share buyback on top of its existing $6.4 billion current plan.

SunTrust Banks (STI) trades for just 82% of book value, but management is actively working to narrow that discount. The firm raised its payout 140% over the past three years while repurchasing 6% of its shares outstanding. 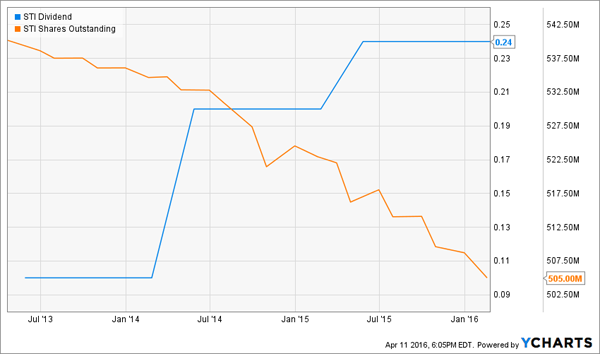 Earnings have been flat over this time period, however, and the stock has returned just 18% including dividends. But analysts are forecasting growth ahead, with earnings 10% higher next year. That puts the stock at just 10-times forward estimates.

The bank is rolling out and expanded services package for mid-sized companies, including M&A advisory. If these initiatives pan out and add incremental profits, STI will roll higher. 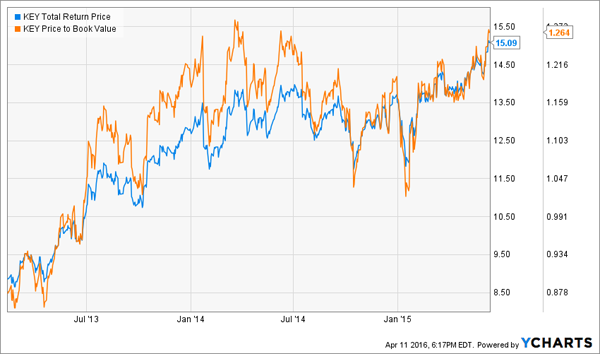 As with our other names, investors are concerned about KEY’s earnings growth with low interest rates. But the “smart money” is betting there will be at least one rate hike this year.

As rates grind higher, that will help the profitability of every firm mentioned here. But their share prices (and valuations relative to book) will likely be higher as we get closer to the next hike. So the time to buy them is sooner rather than later.

Cheap banks are the best buys on the board today. As much as I like these four, I like an undercover trio of small banks even more. Reason being, they raised too much money in 2015 – $794 million to be exact – and they’re returning it hand over fist to investors this year.

See, these firms minted their own pile of money by taking advantage of a financial phenomenon known as a mutual-to-stock conversion. If you’re not familiar with conversions, you can think of them like initial public offerings, or IPOs. In these events, companies put their shares up for sale to the public and get cash back in return.

But smaller banks tend to have capital-efficient business models. It means management may not need most or even all of the cash it raises in these sales. The result is an “overcapitalized bank” – literally a bank with too much money.

When an overcapitalized bank has a share price selling at or under book value, shareholders can make a killing. Management can aggressively deploy its extra cash to buy up shares boost the stock price. It’s perfectly legal, provided that the company waits one year post-conversion to start buying its own shares.

These three banks have waited the year, and they’re already starting to buy their own shares. Click here, and I’ll explain more and share the stock names and tickers.