A couple weeks ago, I showed you how to zero in on something every investor longs for: growth at a reasonable price.

These days, it’s a tall order. With the S&P 500 back near breakeven after this winter’s flame-out, valuations are again ticking higher.

But no matter where the broader market’s headed, there are always top-quality dividend payers on sale. The key is to comb through unloved sectors and tease out strong businesses that have been tossed out with the laggards.

Here are two examples of companies investors have (unfairly) punished. Their stocks won’t be long in detention, however—these businesses are too good, with management teams that are too shareholder friendly, to stay down for much longer.

JPMorgan Chase: Profit Alongside the CEO

If you read my March 30 article, you’ll recall that I mentioned one of Peter Lynch’s famous axioms on insider trading: “Insiders might sell their shares for any number of reasons, but they buy them for only one: they think the price will rise.”

It’s certainly worked out that way for JPMorgan Chase & Co. (JPM) CEO Jamie Dimon, who bought $26 million of the bank’s stock on February 11, after it started the year with a 20% dive. Since then, he’s up 6.5%, netting himself a nice $1.7-million gain. 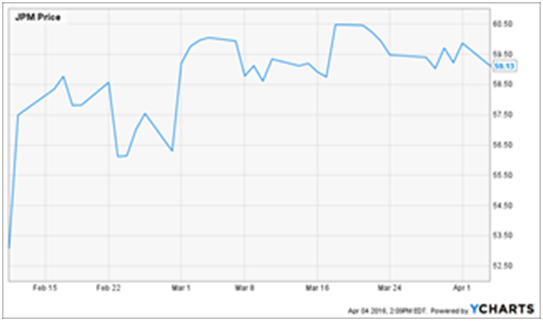 Sure, banks face big challenges—like stubbornly low interest rates, an economic rebound stuck in the weeds and energy firms that are having a tough time repaying their loans. But Wall Street’s pessimism reflects all that: analysts expect JPMorgan to report first-quarter earnings per share (EPS) of $1.27 on April 13, down from $1.45 a year ago.

Dimon’s putting his own money in a bank that knows how to hang tight in tough times. Even though the stock took a big hit at the start of the year (like all banks), it’s only slipped 2.1% in the past 12 months, while Morgan Stanley (MS), Goldman Sachs Group (GS) and Bank of America (BAC) have fared far worse.

JPMorgan Fends Off the Bears… 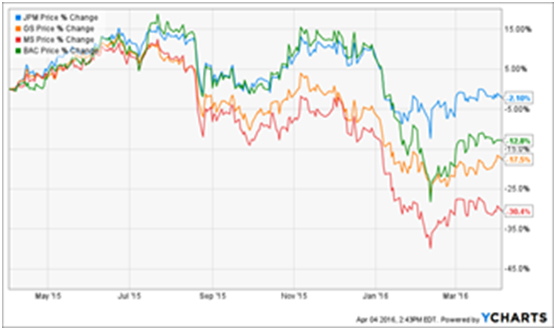 Meantime, the stock boasts a 3.0% dividend yield and the highest shareholder yield (a combination of dividends and buybacks) of the bunch, handing investors back a tidy 7.8% in the past year. 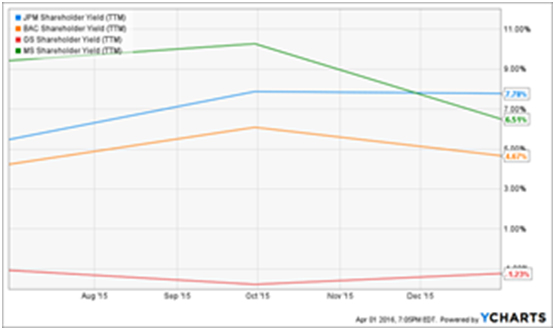 While JPMorgan does have $44 billion of oil and gas exposure, exploration and production firms, which have been hardest hit by crude’s collapse, account for just 39% of that total, or only about 2% of Morgan’s overall loan portfolio.

And even a small upside surprise in Q1 earnings could send the stock soaring. But either way, the long run looks brighter: while the bank’s profits are expected to take a step back this year—down to $5.65 a share from $6.00—the Street sees them jumping to $6.39 in 2017.

The bottom line? Now is a great time to start building a position, with JPMorgan’s forward P/E ratio clocking in at just 9.1. It also trades at 97% of book value, or less than what it would be worth if it were broken up and sold today.

Dimon’s fellow execs agree: two weeks ago, the bank’s board authorized a $1.9-billion share buyback, on top of the $6.4 billion remaining on its current plan. That vote of confidence, plus a payout ratio at a low—and steady—32.2%, makes another dividend hike this spring a near lead-pipe certainty. 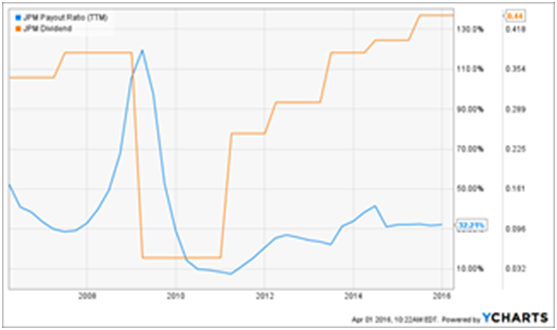 Railroad stocks have taken a beating in the last couple years, squeezed by plunging coal demand and oil’s nosedive. The result has been fewer tank cars rolling out of America’s shale regions.

Union Pacific (UNP), with more than 30,000 miles of track across the western US, saw its coal shipments slide 31% in Q4, while chemicals (including oil) dropped 7%.

In the background is a railroad that’s laser-focused on slashing costs and boosting efficiency—nicely setting itself up for the next upswing.

Last year, for example, Union Pacific cut its operating ratio (which measures operating costs vs. revenue, the lower the ratio, the better) to 63.1%, topping CSX Corp. (CSX), at 69.7%, and Kansas City Southern (KSU), at 63.4%, but trailing leader Canadian National Railway (CNI), which I analyzed on April 4, at 57.2%.

And while the direction of commodity prices is anyone’s guess, the Fed’s cautious approach on interest rates should take some steam out of the greenback, helping boost exports, while last Friday’s strong jobs report bodes well for consumer spending. Gains in either area would be a tonic for Union Pacific’s intermodal, industrial products and automotive shipments.

Meantime, the company remains one of the most shareholder-friendly outfits out there: the stock yields 2.8%, which is just a touch above the S&P 500 average, but Union Pacific has boosted the payout by 132% over the past five years. And it bought back $3.5 billion of its stock in 2015, up from $3.2 billion in 2014. That’s put a big dent in its share count and helps support EPS—and the share price.

Union Pacific Invests in Itself 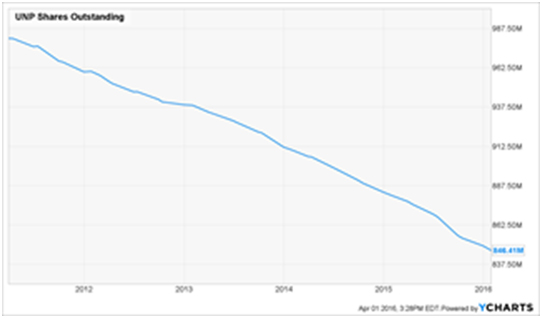 Finally, the stock’s forward P/E ratio clocks in at 13.1, suggesting a 14% rise from here if it simply reverts back to its five-year average of 14.9.

Union Pacific and JPMorgan are both great buys for high, safe dividends and big gains, but why mess around with 3.0% yields (or less) when you can more than double that straight out of the gate with my top buy now?

It throws off a sky-high 6.8% and hikes its payout every single quarter like clockwork.

With regular increases like those, you’ll be earning a 10%+ cash yield on your initial investment in just a few short years.

And unlike investors in JPMorgan and Union Pacific, you won’t have to worry about the next downturn sideswiping your investment, because this company is locked in on a trend that’s carved in stone no matter what: the graying of America.

My favorite pick provides direct nursing care to older Americans—and that population is exploding, fueling skyrocketing demand for healthcare services. By 2024, national healthcare expenditures will hit $5.43 trillion, or about 20% of GDP.

This firm is cashing in on this trend and it’s growing its already-big 6.8% dividend literally every 3 months. Plus, thanks to its bargain valuation, the stock has easy 20% upside from here, or better.