A couple of weeks ago, I discussed the value of investing in the S&P 500 Dividend Aristocrats, the 50 companies in the index that have hiked their dividends for at least 25 consecutive years.

It boils down to performance: in the last decade, this vaunted group has returned an average of 10.3% a year (including dividends), compared to just 6.3% for the S&P 500 as a whole.

It’s also a list that doesn’t change much. Last year, there was just one adjustment, and it was a removal, after Family Dollar Stores was taken over by Dollar Tree (DLTR).

But in the next 14 months, four companies will punch their tickets to this elite club. Should you invest in them? Here, from worst to first, is my take on the Dividend Aristocrats “class of 2016.”

Analog chipmaker Linear Technology (LLTC) raised its dividend for the 24th straight year in February, making it eligible to enter the pantheon of Dividend Aristocrats in early 2017. The stock currently yields 2.9%.

That’s the good news. The bad? The market for analog chips, which are used in everything from cars to digital cameras, is highly competitive and fragmented. The largest player, Texas Instruments (TXN), controls 18%, compared to just 3% for Linear.

That means the company will have to spend heavily just to hold its own, though it does improve the odds of a takeover by TI or another competitor.

Linear can only hope, because its profits are caught between tough competition and the sluggish economy: in its fiscal 2016 second quarter, earnings per share (EPS) slipped to $0.50 from $0.51 a year earlier, and the company is only expected to report EPS of $1.99 for the full year, down from $2.12 in fiscal 2015.

And if you thought a slow grower like Linear would at least be cheap, you’d be wrong. Its forward P/E ratio clocks in at 22.8, well above Texas Instruments (19.3) and its five-year average (20.5).

Praxair Inc. (PX) also marked its 24th straight dividend hike earlier this year. The stock yields 2.7%, and a 25th increase next spring looks like a slam-dunk, thanks to its reasonable 52.9% payout ratio (or the percentage of earnings paid out as dividends).

The company supplies industrial gases, like acetylene (for welding), helium and krypton (used to make windows and semiconductors).

But like Linear, Praxair operates a cyclical business. It also gets 45% of its sales from outside North America, so it’s being hit by the stronger greenback: in the fourth quarter, foreign exchange cut its sales by 10%. 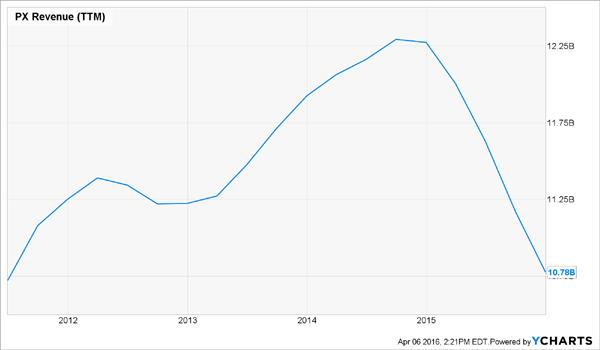 Praxair offset that with cost cuts, which helped it grow adjusted EPS by a penny, to $1.47 from $1.46. But that only goes so far: what it really needs is a manufacturing rebound—particularly in China and Brazil—and I don’t see that happening anytime soon.

General Dynamics (GD) became a Dividend Aristocrat with gusto in early March, marking its 25th year of dividend hikes by announcing a 10% increase, payable in May.

Hikes like that are par for the course for the defense giant, which has raised its payout by 230% since 2006. Keeping its membership in the Dividend Aristocrat club will be a cinch: its payout ratio sits at just 29%.

The knock on General Dynamics is its reliance on the US government (57% of 2015 revenue) to buy its tanks, ships and computer systems. That’s a risk, to be sure, but with terrorist threats on the rise, I don’t see that spending slowing down anytime soon.

That hasn’t been lost on General Dynamics’ board, which authorized a 10-million-share buyback in December. That’s a big plus, because fewer shares translate directly into higher EPS and share prices. 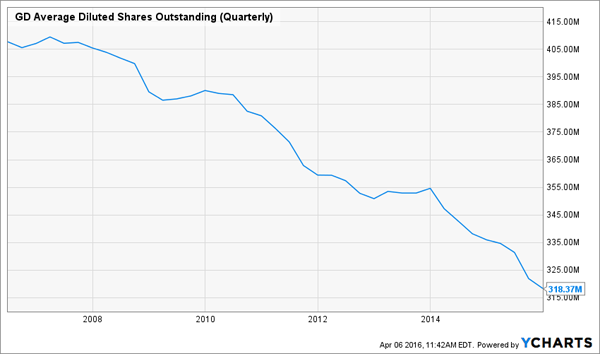 Roper Technologies Inc. (ROP), my top pick among these four, has the one ingredient General Dynamics lacks: diversification.

Roper is a Florida-based industrial firm that increased its payout for the 24th consecutive time in January. Look for it to hit the magic number in January 2017.

It’s a good thing companies don’t need a high dividend yield to become Dividend Aristocrats, or Roper’s 0.68% would surely disqualify it. But that low yield masks an incredible growth story: in the past decade, the payout has jumped 410%. 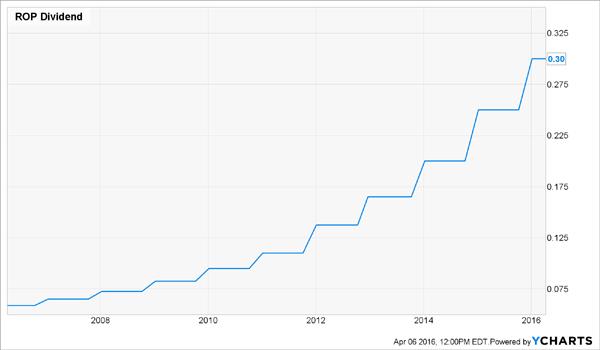 The stock’s down 6.5% this year on worries weak oil prices will keep weighing on energy firms’ spending.

But energy is Roper’s smallest business, chipping in just 16% of its total revenue in 2015. When you strip out energy and industrial products—the two most volatile divisions—you’ll see that the others (representing 63% of total revenue between them) are going gangbusters, notching a combined 14.6% sales increase in Q4, and an 18.8% rise in operating profits.

Meantime, Roper trades at 24 times its forecast earnings over the next 12 months and just 20 times free cash flow. That’s a reasonable price in light of its growth potential, both organically and through acquisitions.

Roper and General Dynamics are strong picks from this year’s crop of Dividend Aristocrats, but why settle for annual dividend hikes when you can watch your payouts rise every single quarter like clockwork?

That’s what you get when you invest in the stock I’m urging my readers to buy now. It yields a sky-high 6.8% and, thanks to its regular quarterly increases, it takes just six years—not 25—to rack up 25 straight hikes.

This steady cash generator has been doing this since 2012, so it will become an unofficial Dividend Aristocrat in 2018—just two short years from now. Plus, the shares have easy 20% upside from here or better, as they’re trading for just 10 times cash flow.

And you won’t have to worry about the next downturn sideswiping your investment, because this company is locked into a trend that’s carved in stone no matter what: the graying of America.

It provides direct nursing care to older Americans—and that population is exploding, fueling skyrocketing demand for healthcare services. By 2024, national healthcare expenditures will hit $5.43 trillion, or about 20% of GDP.

This firm is cashing in on this trend and it’s growing its already-big 6.8% dividend literally every 3 months. But it will only be a matter of time before income-starved investors pick up on this reliable payer and pile in. That’s why you need to make your move now, while it’s still cheap.