Looking for an easy way to boost your portfolio’s long-term returns? Here’s one: buy and hold top-quality dividend stocks—especially those that raise their payouts every single year.

Analysis from Ned Davis Research backs that up: from 1974 through 2014, non-dividend-payers eked out just a 2.6% average annual return. That’s barely enough to stay ahead of inflation!

Dividend-payers returned 7.7%, which isn’t bad—but why settle for that when you could’ve held stocks that regularly hike their payouts and pocketed a tidy 10.1% a year, on average?

5 Growing Payouts That Go Great Together

Here’s a five-stock portfolio packed with some of my favorite dividend growers now. Each one hails from a different sector: technology, utilities, railroads, finance and telecom. (I’ll also give you a bonus healthcare pick a little further on.)

Qualcomm, Inc. (QCOM), the world’s largest chipmaker for mobile devices, has tumbled 26% in the past year as investors fretted about a maturing smartphone market and a rising tide of cheap Chinese chips.

That has left Qualcomm trading at just 11.9 times what it will likely earn in the next 12 months—a bargain multiple that totally ignores the company’s huge potential in other areas.

For example, its recently released Snapdragon 820 chipset supports virtual reality, which Goldman Sachs (GS) says will explode into an $80-billion business by 2025. The company is also investing in technology for civilian drones—a market that’s expected to grow at a 19% compound annual clip between 2015 and 2020.

The best part? You’ll be well paid while you wait for these markets to take off: QCOM yields 3.8% and has hiked its dividend by 123% in the last five years. Plus, its strong free cash flow—$2.6 billion in Q4, or 3.6 times what it paid out in dividends—and $16.5-billion cash hoard mean it can easily afford to develop new chips and keep its shareholders happy, too.

Duke Energy Corp. (DUK) yields a tidy 4.1% today and has paid a dividend for 90 straight years.

At first blush, the utility’s payout ratio (or the percentage of earnings it pays out as dividends) seems high, at 80.4%, but that’s more than reasonable for a steady earner like Duke, whose regulated operations generate 93% of its profits. 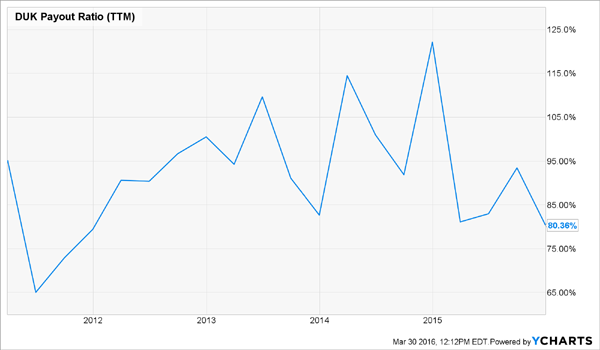 And as I wrote when I shared my 5 best utilities for dividend growth a little over a month ago, Duke plans to keep its payout hikes rising in tandem with earnings-per-share (EPS) growth, which it pegs at 4–6% annually for the long term.

That steady profit rise will be powered by $20 billion in investments the company is making through 2019 in next-generation infrastructure and renewables.

Canadian National Railway (CNI) lets you diversify by sector and by country. It boasts 20,600 miles of track, reaching both of Canada’s coasts and stretching down to the Gulf of Mexico.

Plunging oil prices and coal demand have taken the steam out of railroads in the last couple years, and CN is no exception: in Q4, lower shipments of both commodities clipped its revenue by 2%. But it still managed to boost EPS by 15%, to C$1.18.

How? For one, CN is one of the most efficient railroads on the continent. It ended the quarter with an operating ratio of 57.2% (operating ratio measures operating costs against revenue; the lower the ratio, the better), down 3.5 points from a year ago. And two, it continues to buy back shares, to the tune of C$1.75 billion worth in 2015.

Meantime, it’s doing a great job of shifting to fast-growing areas like automotive and intermodal.

And don’t let CN’s middle-of-the-road 1.8% yield fool you. This company is on a dividend-growth tear, hiking its payout 130% in the past five years (in Canadian dollars), including a 20% boost in December. 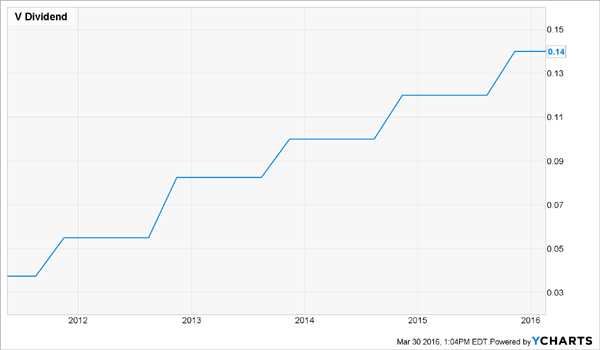 So if you’d bought V back in early 2011, you’d already be yielding 3.1% on your original buy-in. And that growth streak looks set to continue, because the company’s payout ratio clocks in at a meager 18.6%, a far cry from the 50% I see as safe for most dividend stocks.

Visa’s rising profits should keep that ratio low—and the dividend rising. Wall Street sees adjusted EPS jumping 6.9% in fiscal 2016, to $2.88, while fiscal 2017 profits are forecast to leap 16%, to $3.25, as the cashless society edges ever closer to reality.

Verizon Communications (VZ) has jumped more than 20% since I first recommended it back on January 9.

But if you’re worried it’s too late to snap up this reliable dividend-grower at a reasonable price, don’t be, because even with the jump, VZ trades at just 13.0 times its forecast 2016 earnings, still below its five-year average of 13.6.

And even though the big US telecom stocks are known more for steady—rather than spectacular—dividend growth, Verizon’s has risen the fastest of the bunch. Just look at how its payout growth has compared to that of AT&T (T) in the past five years: 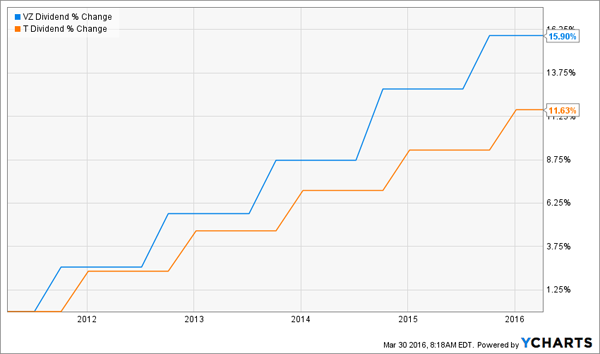 The company is also profiting from the Internet of Things (IoT), where everything from kitchen appliances to industrial sensors is dialed into the Web. In Q4, Verizon’s IoT revenue jumped 18% from a year ago.

Bonus Pick: This 6.8% Yielder Boosts Its Payout 4 Times a Year

These five dividend-growers are all great picks, but you’ll really send your income soaring if you complement them with my top buy now. It offers the best of both worlds: a sky-high 6.8% yield and payout hikes that come every single quarter like clockwork.

With regular increases like those, you’ll be earning a 10%+ cash yield on your initial investment in just a few short years.

This company provides direct nursing care to an elderly population that’s exploding. And that trend is set in stone, no matter what happens to the price of oil, the outcome of this year’s election, or even China or the Fed.

The greying of America is fueling skyrocketing demand for healthcare services: by 2024, national healthcare expenditures will climb to $5.43 trillion, or about 20% of GDP.

This firm is capitalizing on this trend, and it’s growing it’s already-big 6.8% dividend literally every 3 months. Plus, thanks to its bargain valuation, the stock has easy 20% upside from here, or better.

In fact, I like it so much that it’s be come a cornerstone of my “No Withdrawal” Portfolio, which let’s you retire on dividends alone without ever worrying about running out of money.

Click here for details on my “No Withdrawal” approach, along with name, ticker & buy advice on this unstoppable 6.8% payer.