3 ETFs To Fund A Happy Retirement

Fees, in particular, can be a killer. A recent study found that even a 1% annual fee would pluck $70,000 from a typical worker’s retirement account over 40 years, compared to cheaper options.

Luckily, cheaper options abound, thanks to the boom in exchange traded funds (ETFs). I’ll give you my three favorites in a moment.

How a “Safe” Approach Can Ruin Your Retirement

If your working career is over—or almost over—your advisor may be telling you to cut back on stocks, or exit the market entirely. I hope you’re ignoring that advice.

That’s because fixed-income investments offer such pathetic yields—1.25% in the case of your average one-year CD—that even with today’s tame 2% inflation, this so-called “gain” is actually a loss. And that’s without any extra interest left to pay your living expenses!

Tack on the fact that we’re living longer than ever, and the odds you’ll outlive your savings take a big leap higher.

Instead of ducking out on stocks, here’s a better idea: “go passive” by putting at least some money in ETFs—particularly those holding companies focused on “shareholder yield,” or returning cash to investors through dividends and share buybacks.

That way you can still pocket the high yields you can only get from stocks and spend less time at your computer—and more on hobbies or with the grandkids. Best of all, stocks that pay dividends and/or buy back shares have a proven record of beating the market. ETFs simply give you an easy, low-fee way to buy them.

With that in mind, here are three great ETFs to buy now, whether you’re in retirement or just starting to build your nest egg.

A Low-Volatility ETF for a Lifetime of Income

The index’s focus on yield means it ignores some stocks, like Visa (V), with low yields but incredible dividend growth, a more important factor for long-term investors.

But that aside, the ETF is a storehouse of the world’s most profitable companies; its top 10 holdings include Johnson & Johnson (JNJ) and Wells Fargo & Co. (WFC), two stocks I recently flagged as great picks to buy now and hold forever.

The fund’s top-quality holdings and broad diversification have helped it beat the benchmark SPDR S&P 500 ETF (SPY) on a total return basis over the past five- and 10-year periods. It’s also held up nicely in the brush fire of the past six months, plunging less precipitously than SPY and outperforming it, to boot: 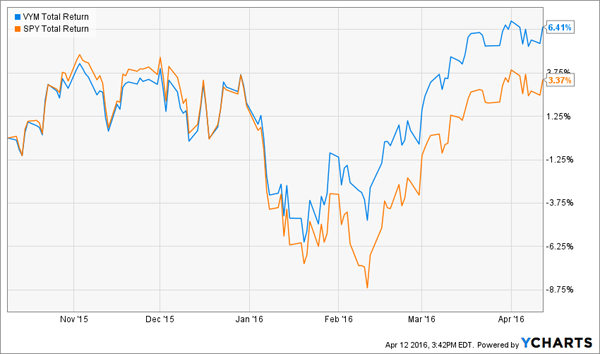 To top it off, the fund boasts the lowest fees of my top three, with a management expense ratio (MER) of just 0.09%.

A Buyback ETF Poised for Growth

Whether you’re in retirement or building toward it, you need both gains and income to stay ahead of inflation. And one of the best ways to find solid growth stocks is to zero in on those that regularly buy back their own shares. That’s because buybacks cut the number of shares outstanding, thereby boosting EPS—and share prices.

The fund tracks the NASDAQ US BuyBack Achievers Index, which includes stocks that have cut their share counts by at least 5% in the trailing 12 months.

It’s not cheap, with a 0.64% expense ratio, but at least investors are getting their money’s worth: since its debut in December 2006, PKW has clobbered the SPDR S&P 500 ETF: 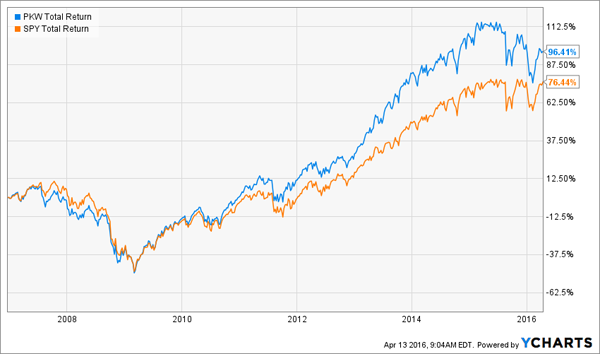 Its third-largest holding is Qualcomm (QCOM), which I pounded the table on a couple of weeks ago. The company bought back $10.5 billion of shares between March 2015 and March 2016. And over the past five years, it’s hiked its dividend by 123%.

That underlines an overlooked advantage of investing in repurchasers: they often pay dividends, too. The Buyback Achievers ETF only yields 1.3%, but its quarterly distribution is on the upswing: in the past 12 months, it’s paid out a total of $0.59 a unit, up from $0.53 in the preceding period.

A REIT ETF With an Income Edge

Regular readers know I’m a big fan of real estate investment trusts (REITs). The reason is simple: they don’t pay corporate tax as long as they send 90% of their profits to investors as dividends.

That basically makes them cash-transfer machines, collecting steady rent checks from their commercial or residential tenants and handing most of those funds to shareholders.

You can quickly add some of the best REITs to your retirement portfolio with the Vanguard REIT Index Fund (VNQ). And your timing couldn’t be better, with VNQ yielding 4.3%, near highs not seen since 2009: 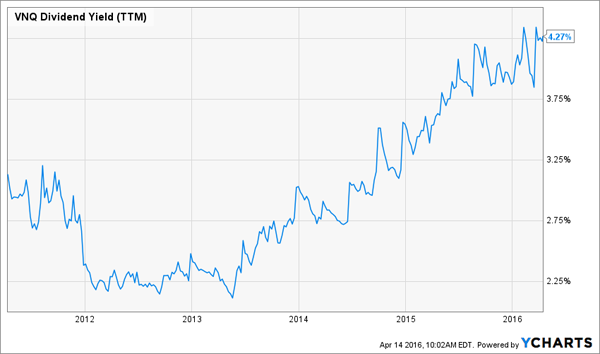 You won’t lose much of that income to fees, either, thanks to VNQ’s 0.12% MER. And like our other picks, the fund is broad-based: it holds 153 REITs, and the biggest sector, retail REITs, is a reasonable 25% of the portfolio.

Here’s where that gets interesting: even though demand is soaring, we actually have fewer skilled nursing facilities than we did in 2009 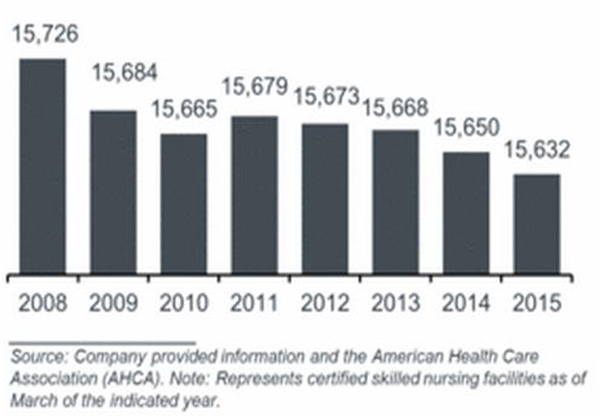 That’s where my three favorite healthcare REITs come in. Like Welltower and Ventas, they operate SNFs, but they throw off far higher yields than either of those two or the three ETFs I told you about today. I’m talking payouts of 6.6%, 7.0% and 8.9%.

If you buy them together, you can quickly create your own “set-it-and-forget-it” retirement ETF. And thanks to skyrocketing demand (and falling supply), I fully expect these rich payouts to double over the coming years.

Go here to get the names and ticker symbols of these three income wonders and our complete strategy for playing this unstoppable demographic shift.