The goo’s new bandwagon bulls have it all wrong: OPEC isn’t driving short-term oil prices. Nor is the latest “technical breakout.” There’s one overriding factor most investors aren’t even aware of – and it’s about to send crude 30% lower quite soon.

The problem these days with moving averages, trendlines and OPEC rumors is that every money manager on the planet has the same information. Think you see something on a price chart, or an OPEC meeting transcript? Odds are somebody else already caught the same thing – and traded off it!

It may sound tough to make a buck in this patch, but in reality it’s never been easier. Reason being, most money managers are trend followers. When oil goes up, they buy. And they buy more and more as the price goes higher – until eventually the majority of them are on the “long side” of the market.

When there’s nobody left to buy, the market is most susceptible to “surprising” declines. This is why oil prices dropped so swiftly on Monday’s latest OPEC nonsense. It’s also the reason crude plummeted from $100 per barrel below $30 in the first place.

In August 2014, I told my readers to short crude oil at $103 per barrel. Money managers were “net long” 320,000 contracts. They’d only wagered that heavily bullish twice in the past year – and both had proved to be tops. 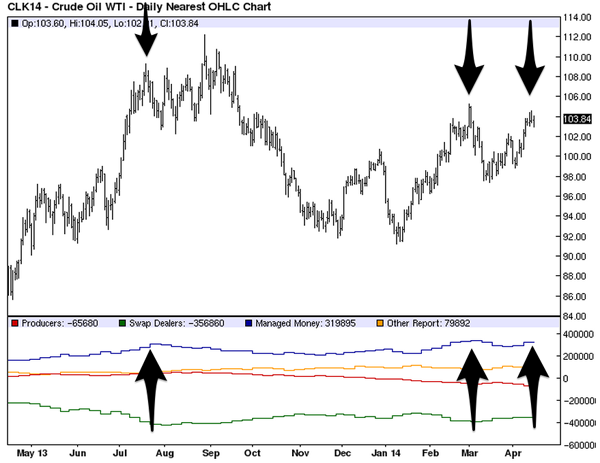 Oil had nowhere to go but down – there was nobody left to buy. Fundamentals tipped prices over a cliff  – as oil supplies skyrocketed, the speculators sold. The more they sold, the more intense the selling got. The trend was down, and they had a big pile of bets to liquidate – which took 20 months to (mostly) clear. 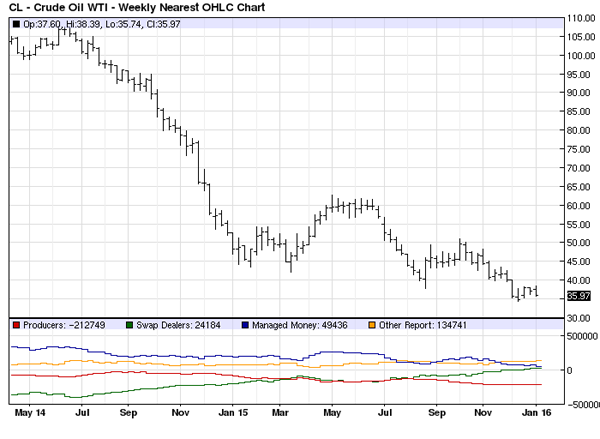 As the crash concluded, money managers were only net long less than 50,000 contracts – an 84% reduction from 20 months earlier! If you’re looking for an explanation behind oil’s big plunge, this is it.

Since then, the goo has staged a bounce back rally. But, once again, it’s been driven more by speculation than supply numbers. Over the last three months, money managers have quadrupled their bullish bets on oil to more than 200,000 contracts. They haven’t been this bullish on oil since July 2015… which preceded a 50% price drop in 7 months.

On Monday, barrels of professionals raced to unload their bullish positions. As long as the market has this bearish overhang, oil has more downside than upside. We’re going to see oil below $30 per barrel again, most likely within months to a year.

Sell Your Energy Payers Now (& Buy Them Back Later)

How did “safe” dividend-paying energy stocks perform during this time period? Better than oil, but not well overall… 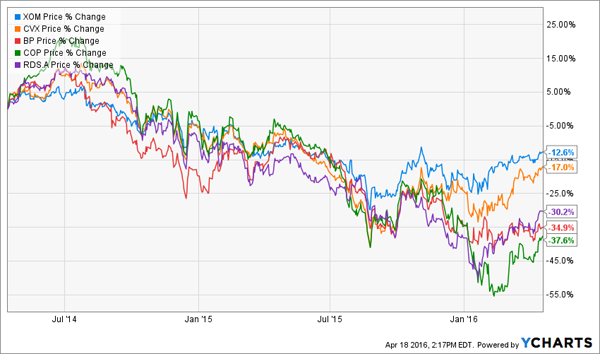 If you own stocks like Exxon Mobil (XOM), Chevron (CVX), BP (BP), ConocoPhillips (COP), Royal Dutch Shell (RDS) – or any other energy issues, for that matter – this is an ideal time to sell them and cash out on the recent bounce.

I’d wait until oil finds its eventual bottom to consider these dividend-payers again. That’ll most likely happen when money managers again reduce their futures bets below 50,000 contracts. For now, you should sell your energy positions immediately – before Wall Street beats you to it.

What dividend payers should you buy instead? I’d look at the healthcare sector. It’s benefiting from the biggest demographic shift in U.S. history – 77 million baby boomers calling it a career.

The blue chip names are pricey, but there are niche providers paying big yields. I’m talking about annual dividends of 6.6%, 7% and 8.9%. All three companies are increasing their sales, profits and payouts annually – if you buy today, you’ll be netting a 10%+ return on your initial capital in just a few years.

The best time to buy them is right now – before Wall Street sends more analysts after these underappreciated companies. Click here for the names and tickers of each, along with my detailed stock analysis.